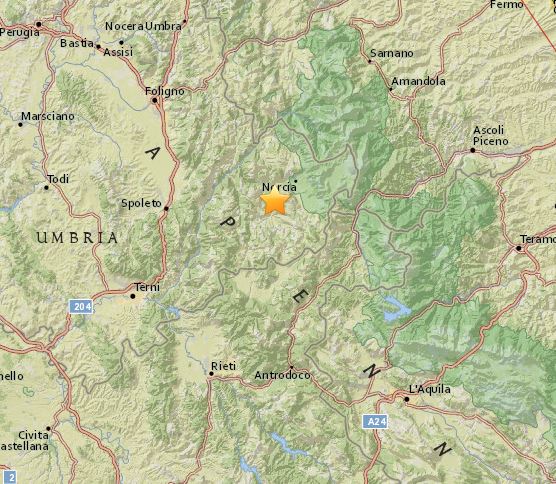 Area hit the hardest by the Quake with some outlying areas. (Credit: USGS)

Two large earthquakes shook areas just SE and NE of Norcia, Italy at in the early morning hours (0230 local time or 1930 PDT), reports the United States Geological Survey (USGS). The original quake was reported by the USGS as a M6.2  and a later aftershock at M5.5.

A local Agency similar to  the American USGS reported feeling about 10 aftershocks in both Central and Northern Italy within a two-hour period.  The impact has reached as many the upwards of 10 million people in  the Country.

Are you safe in Italy and want your loved ones to know? Check out The American Red Cross app @ https://safeandwell.communityos.org/cms/index.php.

Let your loved ones know through Facebook that you are safe.  https://www.facebook.com/about/safetycheck/

The U.S. State Department is urging American citizens in Italy to let your Loved Ones know you are okay via Social Media.

The Mayor of Amatrice, a nearby mountainous town of less than 3,000 (2008 census) reported their City was in complete ruins.  People were reportedly entrapped underneath collapsed buildings.  The Mayor has pleaded with the public to make room for Emergency Response vehicles to be able to pass and reach those who need those services the most.

Local Media:  Various reports of  Magnitudes of the original Quake from M5.7 – M6.4.

Local Quake Agency:  “We have felt about 10 aftershocks from M3.8 to M6.3 in a matter of several hours.”

EMSC: “Aftershock rate is high in #Italy following M6.2 and will likely continue in the coming days.”

Beautiful Amatrice (before) in the snow-covered mountains. (Courtesy: Wikipedia)

Mayor of Amatrice:   “We can hear people screaming trapped under the ruins. We need help!  Our historic City is no longer here.”

Hashtags for this Incident