USDA Forest Service is lead Agency.  4 personnel. Fire being monitored to keep it within the  wilderness.

Commercial timber, infrastructure and cultural resources are under threaten. Direct fire lines strategies are in effect to prevent fire spread. A Fire Weather Watch for the next few days has been forecasted and expected to move through the area

Extreme to hazardous smoky conditions to seriously impact the communities downwind of the fire on all sides.  Visibility will be reduced on Hwy 101 and 199, other local roadways in the area. Gold Beach and Brookings, coastal areas are expected see some of the smoke dissipating to the W-NW while moving to the SE.

27 miles NNW of Winthrop, WA. Start 7/23/17. Cause unknown, under investigation. Timber and brush.

Fire behavior became active on  Saturday with burning  in the interior islands and movement into the Ashnola River drainage to the SE towards the Spanish Camp, Remmel Lake areas.  It is also moving farther N-E into British Columbia, Canada.   Smoke to continue to impact the air quality in the upper Methow Valley.

New! 1/2 miles from Cascade Locks, OR. Reported 9/2/2017 afternoon around 1600 hours in the Columbia River Gorge National Scenic Area.   Timber.  Human-caused and being investigated by the Oregon State Police.

153 hikers had to shelter-in-place near Tunnel Falls on 9/2/2017 due to their only exit was cut off. A National Guard helicopter dropped off supplies on Saturday as well until  local SAR organizations whom were were assisting the Hood River County Sheriff’s Office help evacuate the groups out of the Wahtum Lake area.

Level 3 evacuations. Community of Cascade Locks, residences South of I-84.

Level 2 evacuations. Communities North of I-84.

A Red Cross Shelter has been established at the Skamania County Fairgrounds across from the Columbia River in Stevenson, Washington.

New! 12 miles West of Trout Lake, WA in the Indian Heaven Wilderness on the Gifford Pinchot NF and 10 miles off of the PCT. Start 9/3/2017 this afternoon.  Cause is unknown and under investigation.

5 homes and 15 minor structures are threatened. Air operations to establish a fueling station near Fort Klamath.  Air resources to working all sides of the fires to slow the fire spread, knock down flare ups and to transport crews/equipment to complete indirect containment lines.

Blanket Creek Fire crews are ready to do a burnout along Forest Road (FR) 3282 to get ahead of the fire head.  Crews are working to identify operations for indirect containment lines along trails and/or roads on the NE flank.

Pup Fire is being monitored along with continued point protection on the Hershberger Lookout and nearby telecommunication site.

South of Hwy 126 and East of FS Road 19 on the Willamette NF, OR.  Started 8/21/17. timber, litter and light logging slash.  Cause unknown, under investigation.  A RED FLAG WARNING is in effect until Tuesday due to dry conditions and near record temps.  Includes Nash, Jones, Rebel, Whitewater Fires.

50 homes and 3 mixed commercial/residential and 150 other minor structures are threatened.

15 miles NW of Canyonville, OR. Started 8/26/2017. Unknown cause and is under investigation. Timber (littler and understory) and medium logging slash.

RED FLAG WARNING remains in effect due to elevated temps and NE winds (similar to California’s Santa Ana winds) which is fueling the fire.

Fire crews to continue on Cow Creek where most of the fire is most active.  They will also improve road systems and ridge tops with hand and dozer lines to prep for burnout operations.  Fire is West of the town of the Riddle and continues to move away from communities.

Level 3 evacuations is in effect for Lower Cow Creek Road from the end of County Maintenance to Union Creek and Doe Creek Road.  Local Fire Departments are staffing one engine at nine different homes inside the evacuation area.

There are over wildfires burning in the NW (WA and OR). – USFS

20 miles W-SW of Hood River, OR in the Mark O Hatfield Wilderness on the Hood River District of Mt. Hood NF.   Started 7/4/2017. Cause unknown and under investigation.  Timber (litter and understory).

New! 15 miles SW of Leavenworth, WA and on the Okanogan – Wenatchee NF and in the Alpine Lakes Wilderness. Started 8/11/2017 around 2115 hours PDT but was dormant for several weeks. Lightning caused.  Timber.

Fire is being managed as an ecological benefit. Assets will be determined as the fire increases/spreads over time. It will be watched from the air.  #JackCreekFire

Moderate fire behavior with torching is burning in steep, rock terrain and is wind-driven making it difficult for crews to fight. Fire is spreading to the NE.  Intermittent road closures on Hwy 140 between Bly and Lakeview are in effect due to poor visibility at times.

On Saturday, fire burned throughout day. extreme fire behavior with crowning and backing  increased late in the day when evening winds began to push fire down into drainages including the West side of Sasse Ridge and into the West Fork of the Teanaway River.

For the first time in the Kittitas County Sheriff’s Office history for a full-force callout of all available Law Enforcement personnel to be called in. – KCSO on the Jolly Mtn Fire evacuations.

10 miles NE of Lowell, OR on the Willamette NF.  Started 8/10/17 by lightning. Large downed trees and standing snags. Green trees may weakened from 2003 fire in same area. RED FLAG WARNING for Saturday through Monday due to high temps, low relative humidity and strong drying winds. These prime conditions make for increased fire activity.

5 miles NE of La Pine, OR on the Deschutes NF. Started 8/29/17.  Cause unknown and under investigation.  Timber and brush.

0 homes are threatened and there are no evacuations in effect.

Crews are working to suppress and contain the fire on all flanks and mop up least 50-feet into the burned area, as well as addressing hot spots.

40 homes and 5 minor structures threatened. None has been damaged or destroyed.

9 miles West of Sisters in the Deschutes NF and the Three Sisters Wilderness, OR. Started 8/11/17 by lightning. Timber and brush.

SE and South fire perimeters will continue to be in patrol and mop-up operations.

Structure protection on the Nash Fire.

10 miles North of Klamath Falls on Hagelstein Rim, OR.  Start 8/29/2017. Cause is unknown and under investigation.Timber (grass and understory) and brush.

11 miles West of Cliffdell, WA on the Okanogan – Wenatchee NF. This fire along with the American Fire are being managed by the same IC IMT team and resources. Start 8/11/2017 by lightning. Timber (litter and understory), heavy dead and down material.

25 miles NW of Klamath Falls, OR and on the Fremont – Winema NF. Timber and brush.

Western fire perimeter (East of Cold Springs trailhead). Work in area increased fire traffic on Cold Springs Rd. Closed beyond its junction with FS Rd. 3659. Progression on holding the perimeter around the fire.

FIRE WEATHER WATCH has been issued for hot and dry conditions which are expected throughout weekend. Gusty easterly winds, poor relative humidity (RH) recoveries with a Haines of 6 are expected to increase fire behavior.

20 miles NW of Sisters, OR. Started 8/29/2017 from an unknown cause and is under investigation. Heavy logging slash and timber.

The fire is burning in steep, heavily forested landscapes on the Mt. Baker – Snoqualmie NF.  Roads are being improved to act as fire breaks.

13 miles South of McKenzie Bridge, OR. Started 8/4/2017 by an unknown cause. Timber (Litter and understory) and light logging slash.

Burning in heavy timber and steep terrain along the South Fork of McKenzie River. Crews continuing to use indirect fire tactics and prepping line along FS Rd. 19 (Aufderheide Drive).  Will use burnout operations when conditions are favorable.

23 miles South of Oakridge, OR on the Willamette NF.  Started 8/10/2017. Lightning caused. Timber and brush.  Includes the TUMBLE BUG 2 FIRE.

Great fire suppression efforts have been made on both wildfires.  Fire lines have been established around both fires and are widening and strengthening them by conducting burnout operations.  Mop-up operations of remaining hot spots within 100 feet of the control line.  Some fire resources have been released to other fires or to their home Fire Agency for much-needed rest. 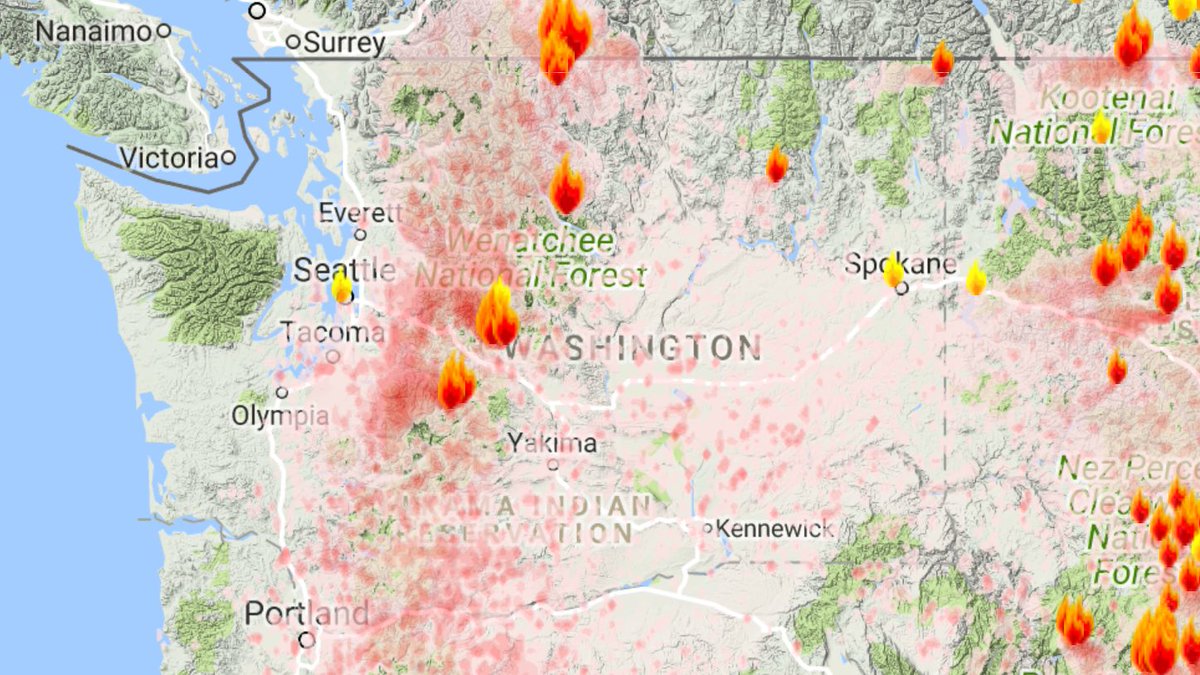 Help yourself and your family by creating a defensible space around your home to protect it from wildfires.  This has helped save so many structures and truly does work!  Here is how. (Credit:  WA DNR) 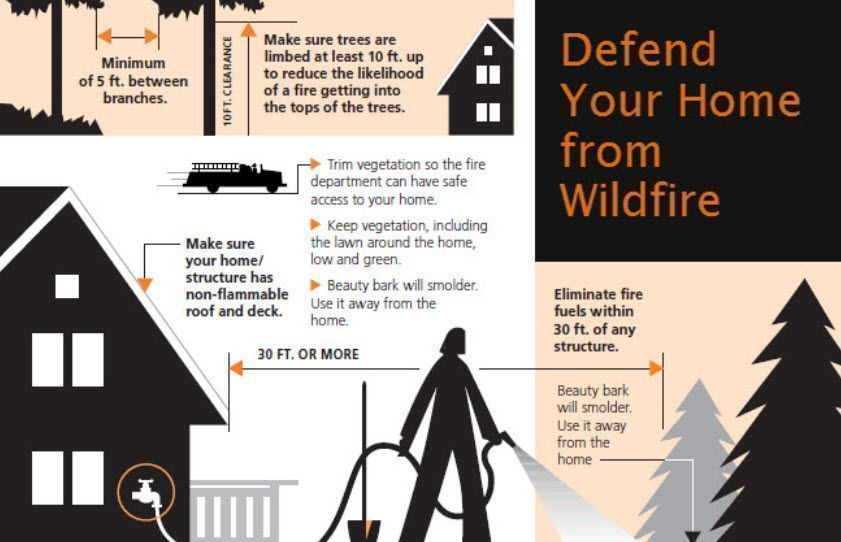 16 miles NW of Manson, WA. Started 8/30/2017 by an unknown cause that is under investigation. Timber and brush. 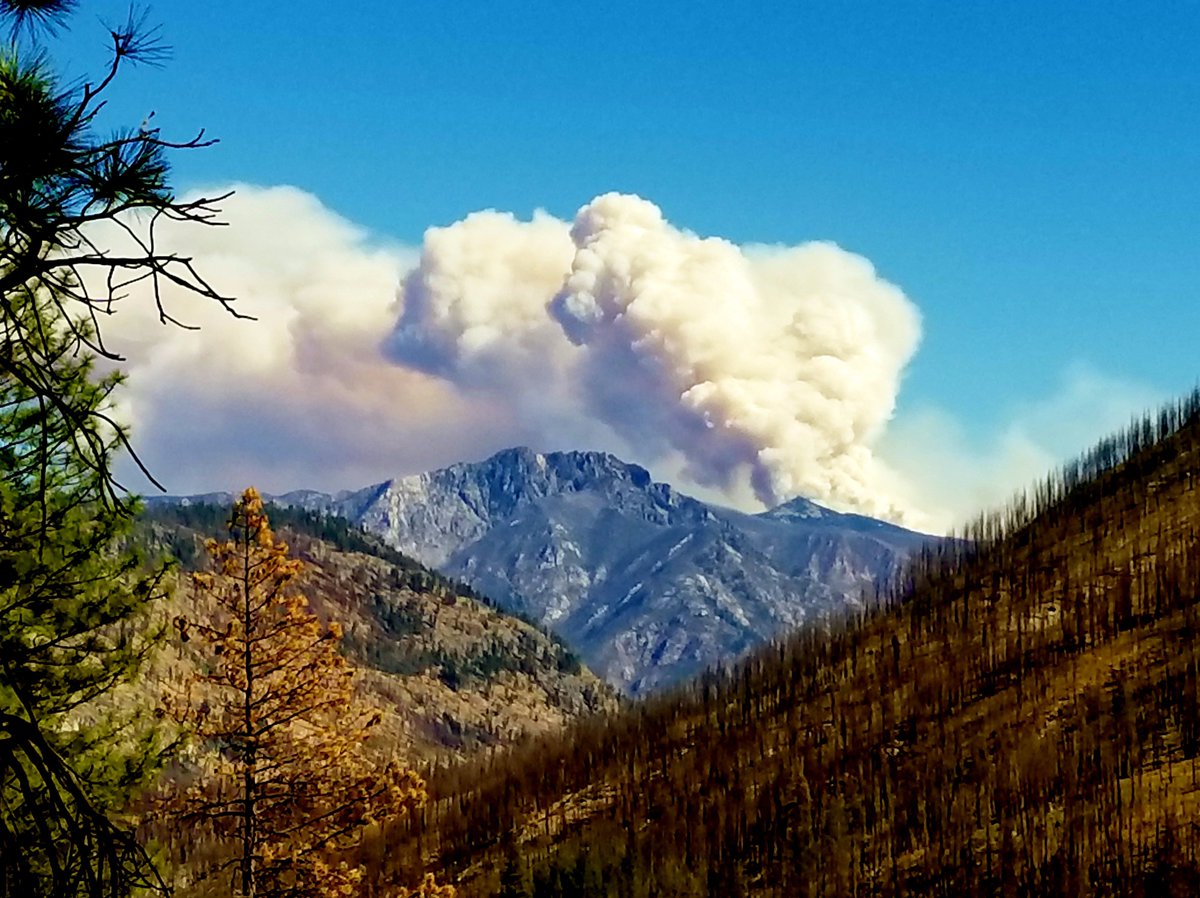 CRITICAL FIRE WEATHER started on Saturday causing the fires to actively spread to the bottom of Safety Harbor drainage but did not cross over to the canyon.  Water drops throughout the day slowed fire forward progression while hotshots and other ground resources improved control lines to the SW.

Smoke is expected to drift down to Lake Chelan and over the Waterville Plateau and highly visible from Manson, Chelan, Pateros and Twisp.

NW Flank. Evaluation of implementation of firing operations ongoing and determination of favorable conditions and the number of resources needed.