A Major Incident. A Shocking Scene.

An 27-story apartment high-rise called the Lancaster Estate building was engulfed in flames from floor 2 all the way to the top floor close to 0100 hours BST on Wednesday, June 14, 2017 (about 8 hours ahead of West Coast time). 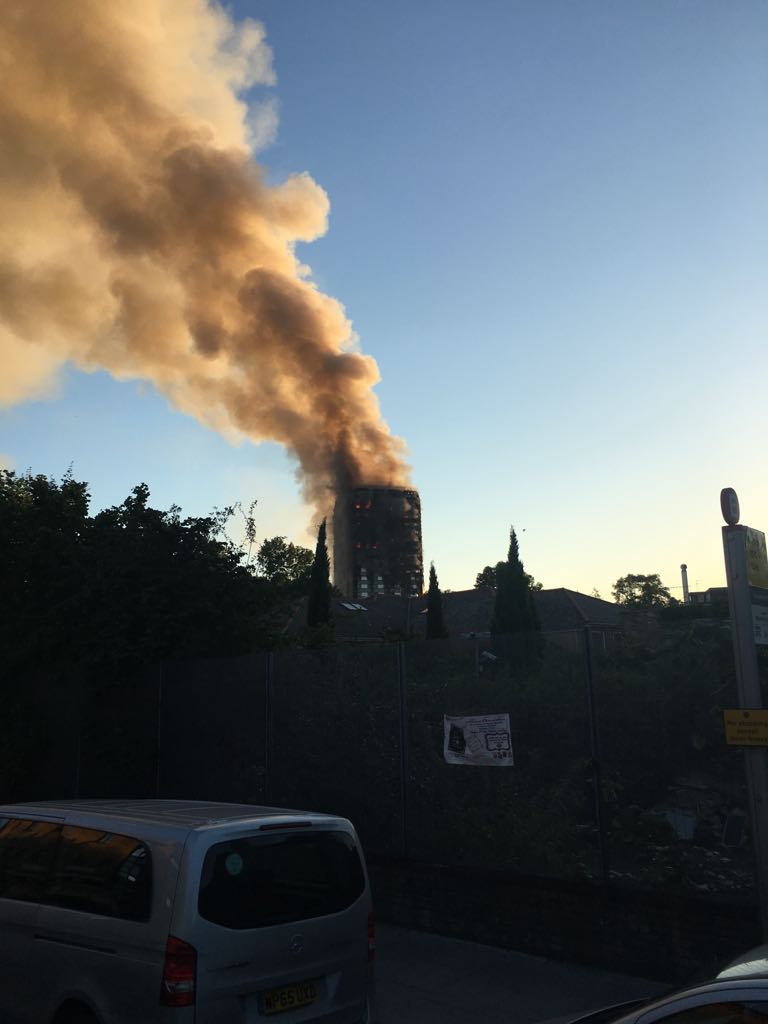 Resources Out in Force

The London Fire Brigade, along with mutual aid from North Kensington, Kensington, Hammersfield and Paddington fire personnel and command staff responded immediately.  Additional Departments also responded from surrounding communities for a total of 200 personnel and 40 engines.

A presser was released in there are 30+ injured and a large number of unaccounted people.  London Ambulance Services had transported about 30 patients to 5 different London hospitals.  They also deployed their HAZMAT unit and Trauma team along with 20 ambulances on the fire ground.

Unconfirmed media reports are saying that there was a faulty fridge on floor 4 that caused the fire but the structure is still ablaze.  From our experience here in the States, we know for sure that Investigators will not be able access the building until the fire has been put out and cooled down.

Police have cordoned off 30 flats and evacuated its residents from their homes around the structure.  We are unsure if this is the collapse zone or if they are being proactive should the full structure integrity fail.

In looking at live photo coverage, it appears this 27-story building has many exposures on all sides of the building.  In one image, it appears the fully engulfed tower may leaning.  We are hoping the fire will burn itself out and no collapse will occur.

More information to be posted soon.

Could This Have Been Prevented?

We are not firefighters nor are we even Fire Investigators for that matter but we, like many of you consider fire safety a priority in our lives – even teaching others about safety at home and work.  Here in the U.S., we are all about #SeeSomethingSaySomething that goes for anything criminal, dangerous or suspicious, including fire dangers and reporting them to the proper authorities.

It appears that the residents of the Grenfell Tower did just that – over and over again without any action by the landlord or its management representatives.

In this case, this fire was predicted – almost one year ago from a blog posting by the Grenfell Action Group, an organization that has been fighting back on slum housing issues and fire dangers lurking in the Grenfell Tower.  The group has been fighting against the Social Housing Agents Kensington and Chelsea TMO (KCTMO) who own and manage the building.

The Grenfell Action Group appears to be doing some pro-active work on fire prevention but at yet every turn, they have been hit head on with obstacles, excuses and inaction.  One haunting post is that they predicted this very fire back in 2016 and tried to get Management to hear them out.

With us living in the United States, there are many slum housing but this ranks pretty high on our list of being angry this has happened to these people who were innocent.  We can only assume that it was more for the money, then for the care of these residents, which we find disgusting and the whole world should stand up for what is right.

Regardless if this was an accident or intentional, it appears that the group’s multiple haunting echoes of fire danger lurking in their building has now come true and is obviously too late to change for the better.

Here are some  of their postings.  (We have reached out to reprint their story but they do not have any contact information on their Blog.)

Blocking Emergency and Fire Access to the Building | https://grenfellactiongroup.wordpress.com/2013/01/30/more-on-fire-safety/ (June 30 2013)

We know this topic of affordable housing rights runs deep and cannot understand why other think it is right to allow their residents to live this way.  We say it is shameful and undignified.

Though the cause may or may not be found, we know that from all of these fire safety requests left unanswered, there are more questions as to why or how this inferno could have been started or even prevented in the first place.

– Our prayers and thoughts go out to the Londoners no matter who you are, what race you are or what your worth is – we are here for you. – LR Swenson, Blogger/Writer/Editor

We will be providing additional updates as information is received. Thank you for joining us