Here is the State of Oregon Wildfire Activity Report for Monday, September 21, 2020.  This covers all wildfire activity and smoke reports from Sunday 0800 PT until 2000 hours PT on Monday for all incidents across the State.

Incidents are listed by each time resources were dispatched via each Communications Center. 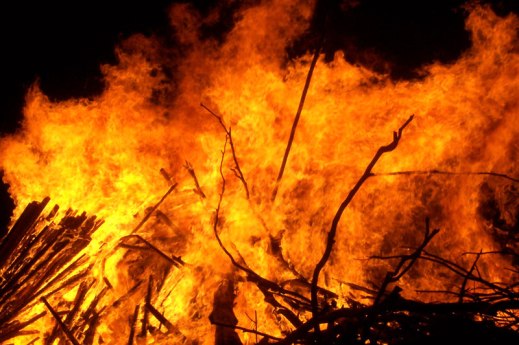 The BEACHIE CREEK FIRE is burning 6 miles from Detroit on the Willamette National Forest in the State of Oregon.

Fire behavior is moderate that is creeping, isolated torching and smoldering.  Multiple structures in several communities along with communications infrastructure are under threat.

Management of the fire is by the SW Team Team 2, an IMT Type 2.

There are 52 personnel along with 16 crews, 32 engines and 7 helicopters assigned to this incident.

There has been 191,661 acres and 1,288 structures destroyed. Fire crews have reached a 20% containment status.

Cost-to-date expenses have reached $9,340,000 for fire suppression and containment efforts.

The BEACHIE CREEK FIRE is burning about one mile near the RIVERSIDE FIRE which has prompted some concerns from residents and Fire Officials about these two fires merging into one super firestorm.   With extreme dry vegetation and a lack of natural holding features in the Table Rock Wilderness and surrounding area to keep the two fires from merging are on the mind of a lot of people with this fire catching the attention of many.

Officials are working to stop that from happening.

The BEACHIE CREEK FIRE ignited on August 16, 2020 from an unknown cause burning on the Willamette National Forest in the Opal Creek Wilderness area and about 15 miles north of Detroit (Marion County), Oregon.

Fire is burning about 2 miles south of Jawbone Flats and 6 miles north of Detroit, Oregon.

About 191,238 acres have been destroyed but crews have reached a 20% containment status.

Fire behavior remains moderate with a continuance of threatening structures.

There are 571 total personnel assigned to this incident which include 14 crews, 43 engines and 7 helicopters.

Total cost-to-date for fire suppression and containment status expenses have reached a total of $8,700,000.

The BEACHIE CREEK FIRE is burning about one mile near the RIVERSIDE FIRE which has prompted some concerns from residents and Fire Officials about these two fires merging into one super firestorm.   With extreme dry vegetation and a lack of natural holding features in the Table Rock Wilderness and surrounding area to keep the two fires from merging are on the mind of a lot of people with this fire catching the attention of many.

Officials are working to stop that from happening.

The BEACHIE CREEK FIRE ignited on August 16, 2020 from an unknown cause burning on the Willamette National Forest in the Opal Creek Wilderness area and about 15 miles north of Detroit (Marion County), Oregon.

Currently, there are 13,551 homes and other structures are threatened which have prompted evacuations in effect.

Closures are in effect for all recreational areas including campgrounds, trails and day-use areas, boat ramps in the following areas:

Recovery efforts are being coordinated by this incident Command and with the Marion County Sheriff’s Office, along with Oregon DOT and Oregon State Patrol along the Santiam Canyon.    About 5,845 structures are still in a Level 3 evacuation order, while 3,961 are under a Level 2.

What is a ‘burn-out’? Does this mean you’ll be putting more fire on the ground? How would that help? If you’ve asked these questions you’re not alone. Our intent with this special update is to help folks understand what’s what and increase your understanding of what this means out on the ground.
A firefighter’s style of ‘burn-out’ has nothing to do with tires, race cars, or cheering fans. In the world of wildland firefighting, a burn-out is defined as intentionally putting fire inside a control line to consume fuel (brush, logs, grass) between the edge of the fire and the control line to create a buffer of burned area around the edge of the fire to help secure the area. This strategy ‘starves’ the fire of fuel and allows our hardworking engines and crews to engage the fire on their terms.
Burnouts will help limit the fire’s spread towards communities. So while you may see more fire or smoke, it’s our hard working crews doing their best to keep you safe today, tomorrow, and for the future.
We appreciate your understanding as we continue to limit new fire growth, protect communities, and safely engage the fire with our partners.
– Beachie Creek Fire Officials

Fire management is under Unified Command with NW Team 13 (Gales) and IMT2 OSFM Green (Hallman) with SW Team 2, IMT 1 (Pierson) shadowing on today, but was transferred to a SW IMT this evening.

Approximately 530 personnel along with 11 crews, 43 engines and 7 helicopters are assigned.

SE Operations:  Crews are continuing to work with landowners to secure control lines.

Total cost-to-date for fire suppression and containment status expenses have reached a total of $7,600,000.

The SOUTH OBENCHAIN FIRE started on September 8, 2020 at 1359 (1:5pm) PT from an unknown cause, which is currently under investigation.

The fire is burning in Jackson County, about five miles east of Eagle Point, Oregon.

About 30,503 acres have been scorched.  Fire crews have successfully reached a 20% containment status.

Smokes continues to keep air assets grounded on Saturday. Some clearing of smoke was anticipated today. However, a dry cold front was due to move in. A RED FLAG WARNING was issued today from 1500 – 2000 (3pm – 8pm) for gusty winds, low RH and conditions becoming unstable.  All are big concerns for Fire Managers, which are generally understandable.

There are 623 total personnel assigned to this incident.   The OR DOF – Medford Unit is the lead agency on this with the PNW Team 8, an IMT 2 team is managing this wildfire.

There are approximately 15 crews, 22 engines and 12 helicopters that are assisting from the ground to the air.

HOW TO HELP IMPACTED COMMUNITIES

Red Cross –> Is asking for monetary donations vs. durable goods and food.

NWFB Community Resource Group –> Check out our new Facebook Group page WILDFIRE COMMUNITY RESOURCES for information on how you can help local communities with needs or resources available to help one another.

NOTE:  We just created this page yesterday and we are working quickly to add resources and other info.  You are invited to join and help us grow this group so we may help those who have been impacted.

We invite you to join us on our Social Media Channels here:

The GREEN RIDGE FIRE is located about 12 miles northwest of Sisters, Oregon on the USFS about 2 miles northeast of Camp Sherman on the Deschutes National Forest and Sisters Ranger District.

There is active fire behavior with short crown running, torching and long-range spotting. Challenges continue for firefighters due to active fire and extensive spotting.

About 1,937 acres of heavy timber and brush have been scorched.  There is a 1% containment status reached.

Personnel consist of 264 total personnel along with 6 crews and 5 engines.  Incident Commander is Al Lawson.  Fire Management is under the NW Interagency IMT Team 10.

The cost-to-date for fire suppression and containment expenses have already reached $1 Million Dollars.

Evacuations are in effect and issued by the USFS Deschutes and the Jefferson County Sheriff’s Office.

There is a TFR over the fire.  #NoDronesInFireZones

The INDIAN CREEK FIRE is burning along Hwy 20 and Jonesboro and 9 miles east of Juntura on BLM (Bureau of Land Management), private and State lands  in the Vale District in the State of Oregon.  It’s point-of-origin aws at mile post 203.

It was discovered on Sunday at 1230 PT.  The cause is unknown and under investigation.

Fire behavior is extreme with wind-driven runs and spotting.  There has been 9,000 acres of sagebrush, juniper and grassland scorched. A 10% containment status has currently been achieved but crews will continue to seek out a full suppression and contained.

Vale District (BLM) responded to a 2nd fire just outside of Jordan Valley around 1330 today designated THE ANDERSON CROSSING FIRE was at an estimated 25 acres. 2 engines were on-scene with orders for additional personnel and air support resources.

Structures and habitat are currently threatened.  Evacuations, area and road closures are in effect.

Management of the fire will be assumed by Pacific NW Team 13, a Type 2 IMT on Tuesday morning

There is 111 total personnel including 1 crew, 12 engines and 3 helicopters.

Road closures are in effect.

Firefighters from the Oregon Department of Forestry’s John Day unit are fighting a wildland about 9 miles southeast of Priarie City, Oregon called the DEARDORFF FIRE. 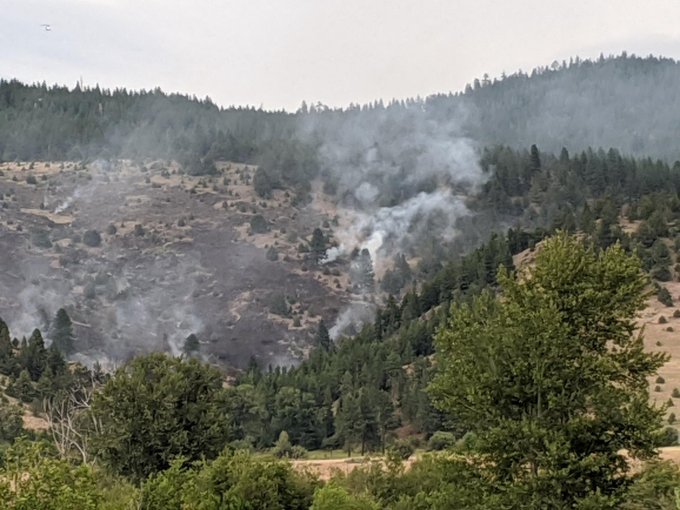 Resources were dispatched at 1513 Hours PT on Sunday, July 12, 2020.  There are currently 2 helicopters, 7 engines and crew on-scene with a large air tanker en route.

There has been 80 acres of grass, brush and timber destroyed.

The fire is threatening one residence and an outbuilding.

No preliminary cause has been released by fire Officials.

This is an Open CAD fire call. 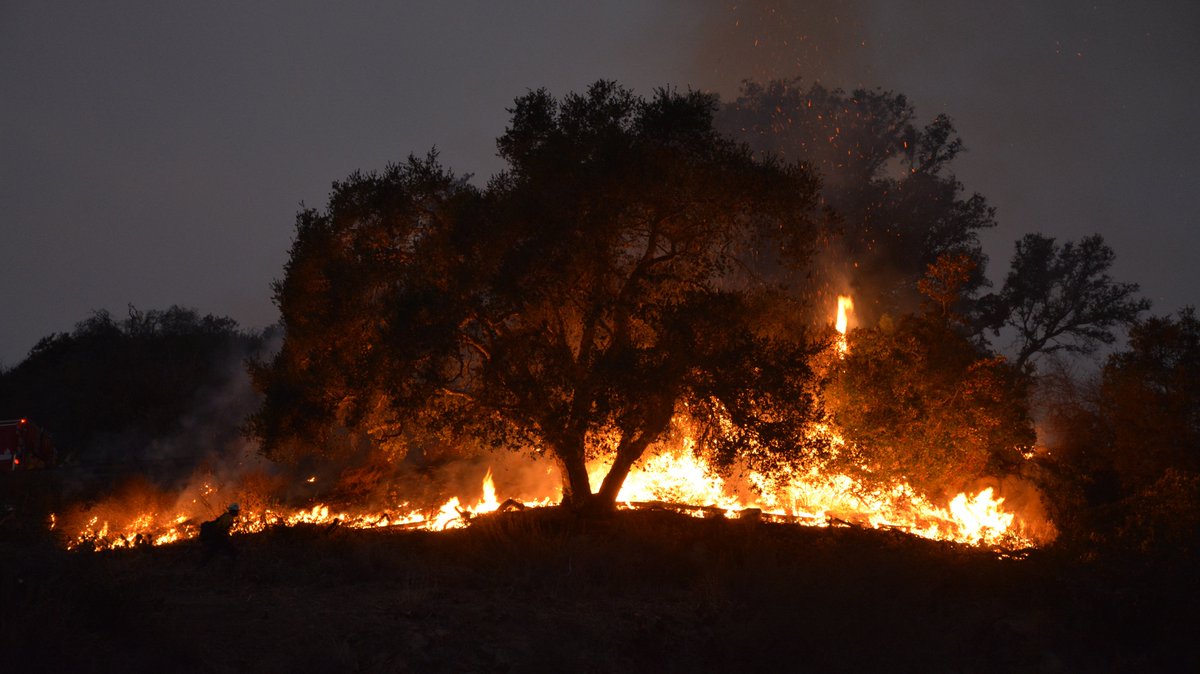 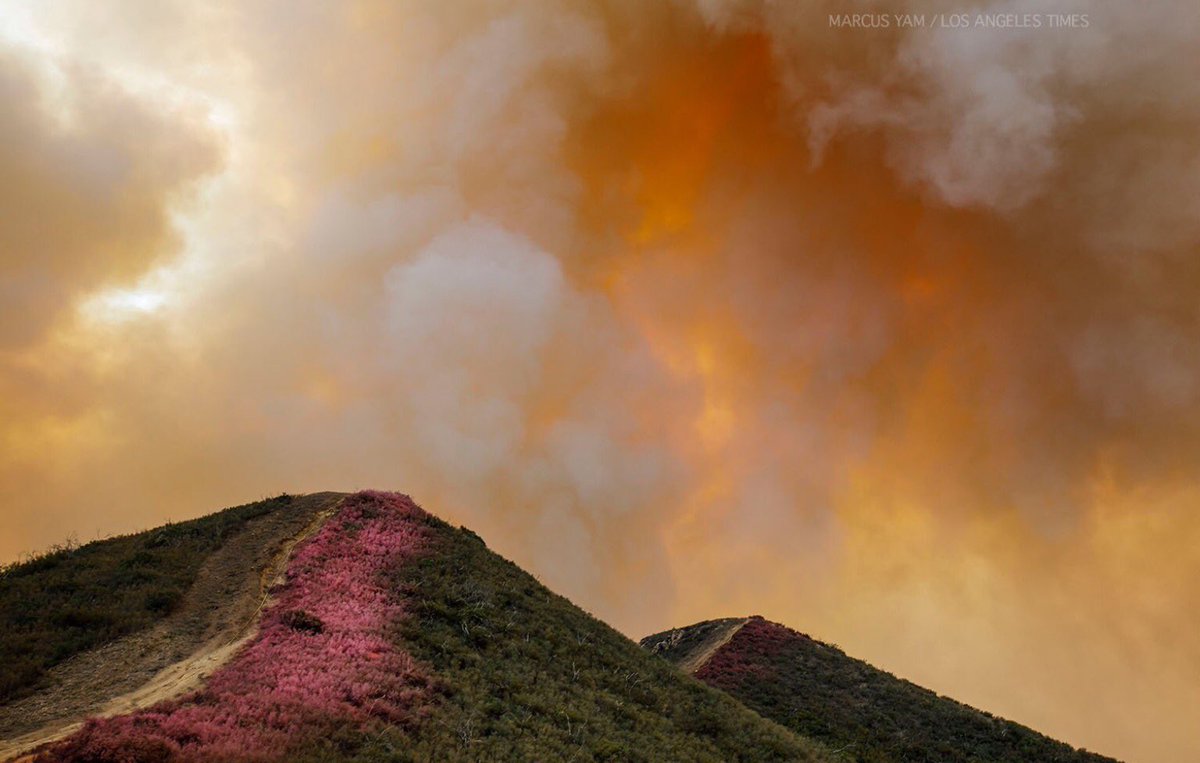 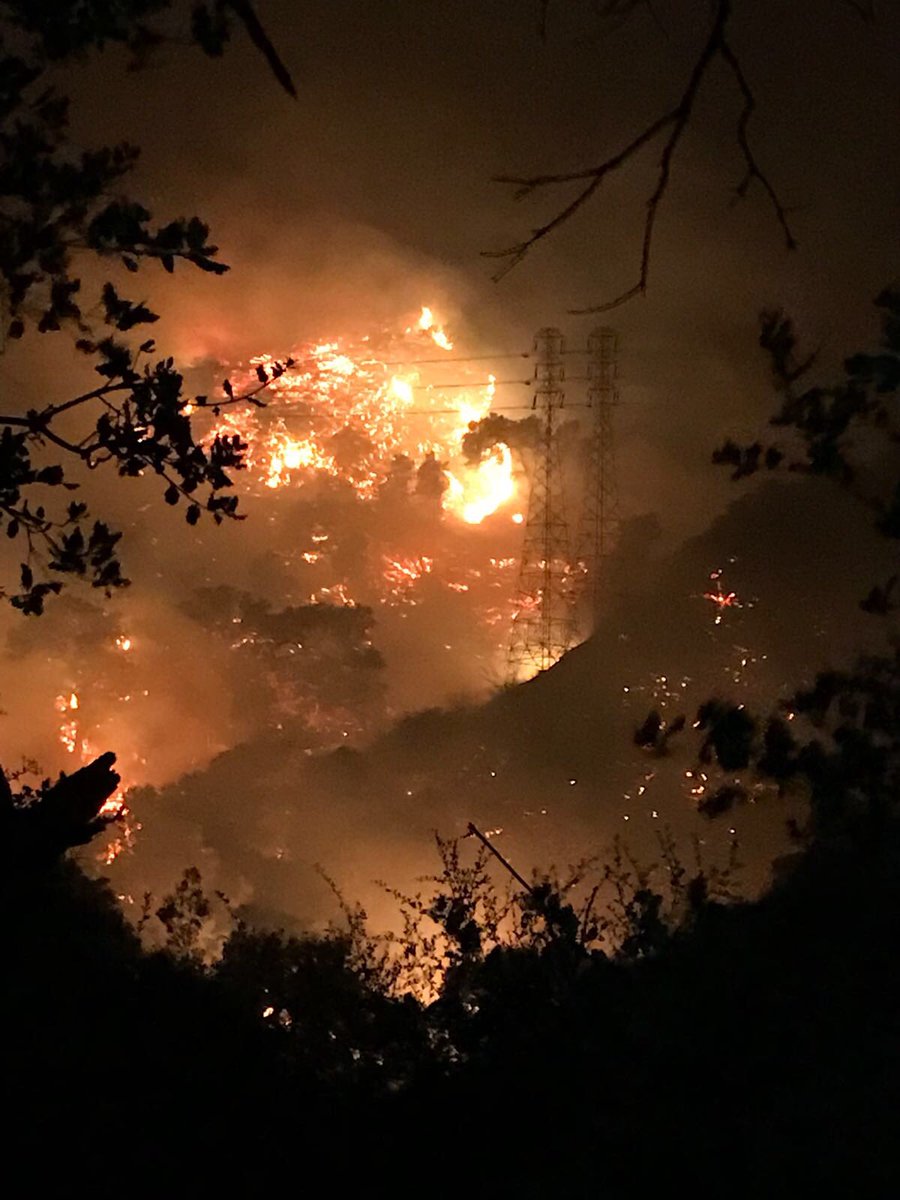 Social Media |  “The fire is so large that its eastern and western fronts are influenced by entirely different wind patterns and terrain. In many ways, it’s as if firefighters are battling two separate fires some 40 miles apart” –  Hollywood Celebrity. 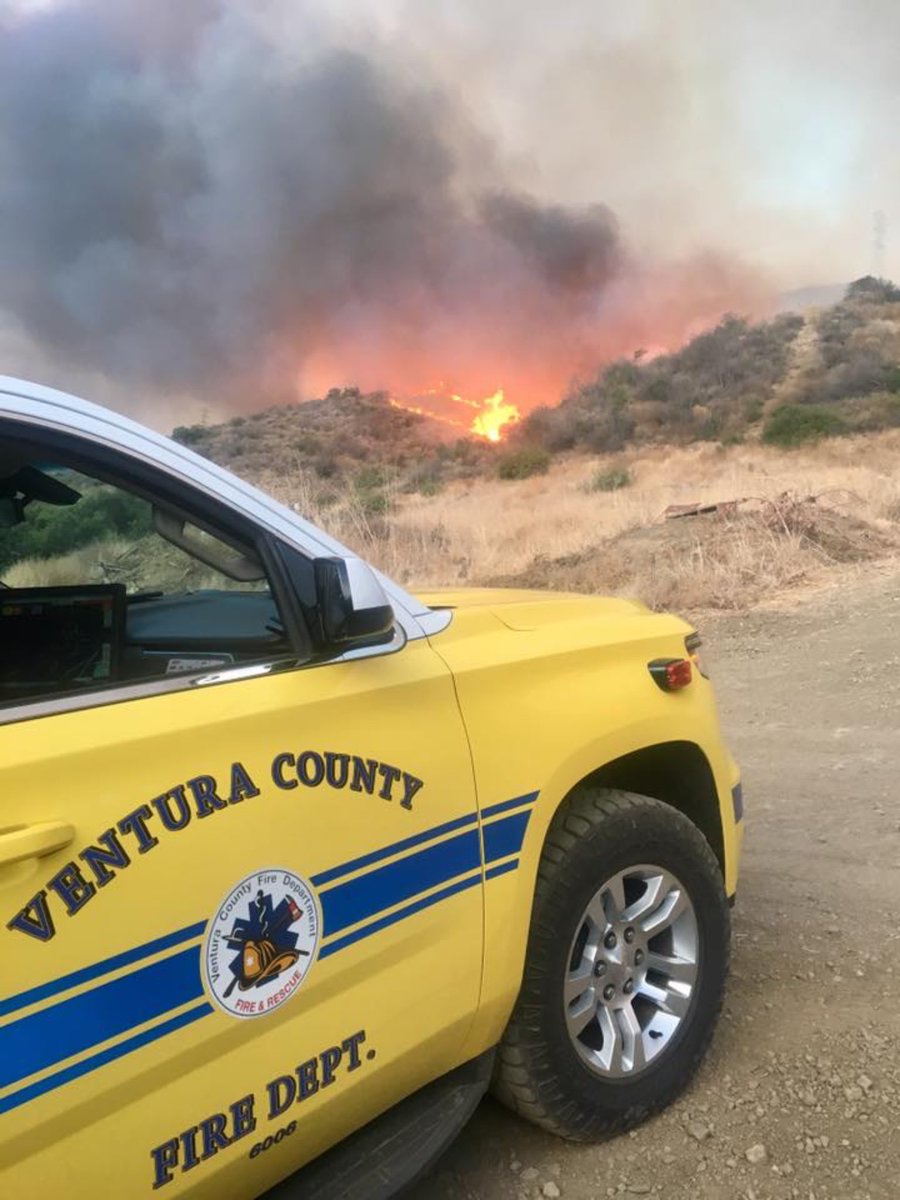