CHELAN COUNTY, Wash. – A two-car MVA was reported as blocking lanes on northbound US 97 at milepost 169 by the Washington State Patrol on Saturday afternoon, November 6, 2021.

It is located about five miles north of Blewett Pass Summit around 1621 hours on Saturday afternoon.

The crash was said to have caused serious injuries and Fire Officials were treating the occupant(s).

The Washington State DOT has personnel en route to the scene for traffic control. This roadway may be fully closed at times during their Accident Team’s investigation.

It is highly recommended that you make other plans and AVOID THIS AREA altogether.

A new wildfire has been detected in Chelan County, Washington, and fire assets and resources have been dispatched to the Manson area at 1928 hours PT.

About .25 acres of grass, brush and timber have been scorched.

The Incident Command is Desalvo, as of 2042 hours on this Friday night.

Limited information with local Fire and Police Agencies. We will provide an update as info is received.

SUMMARY — The MISSION CREEK FIRE is burning in the Mission Creek area, just outside of Cashmere (Chelan County), Washington, which was sparked from an unknown cause on Sunday, June 30th.

SIZE UP — Media reporting the fire burning at 25 acres in unknown fire fuels.

>> Mission Creek Road from the 2800 block to Sand Creek One

CHELAN COUNTY, WASHINGTON STATE — A wildfire named the BOUNDARY RIDGE FIRE is burning off of NF 500 and southeast of Wedge Mountain.

There has been 0.1 acres of grass, shrub and timber burned.

CHELAN COUNTY, WASHINGTON STATE — A wildfire named the BOUNDARY RIDGE FIRE is burning off of NF 500 and southeast of Wedge Mountain.

There has been 0.5 acres of grass, shrub and timber burned.

It is unknown what sparked this blaze.

On December 29, 2020, the Chelan County Sheriff’s Office/9-1-1 Center “RiverCom” received an anonymous bomb threat from an unknown male caller who stated there was an explosive device in a garbage can in the 800 block of Front Street.

Chelan County deputies arrived quickly on-scene with mutual from the Washington State Patrol Troopers to help clear the area and evacuate all residents/businesses in the downtown corridor of the City. Leavenworth’s local hospital also went into lockdown, while others outside of the area were under a shelter-in-place order.

While evacuations were in motion, several bomb squads were en route from the Moses Lake area and from the west side. After the bomb squads arrived on-scene, they worked methodically to check all areas before calling an all clear. The WSP Bomb Squad was said to have found nothing and turned the area back over to the Chelan County Sheriff’s Office around 0200 hours PT on Thursday morning.

Traffic was diverted around US Highway due to roadblocks manned by WSP Troopers. All closures and shelter-in-place orders have been lifted. As you can see from the photo above, everything has returned back to normal operations.

There are currently no suspect(s) identified at the time of this post.

This an active and ongoing investigation.

Chelan County Sheriff’s Office contacted the City of Leavenworth about a bomb threat in the downtown area in a garbage can in the 800 block of Front Street.

All County and City officials are taking this phone threat seriously and are working to track down the caller. Bomb squads are en route or on-scene from Moses Lake and from the west side. The Command Center will be either at the High School or at Chelan County Fire District #3.

There are currently seven Chelan County Deputies and three or more WSP Troopers on-scene. More will soon pouring into area. If you are on the roadway, please pull to the right for emergency vehicles (it is the law).

The downtown corridor was evacuated and all others are strongly encouraged to shelter-in-place. Do not leave your homes/businesses and seek out the police activity in the area. There are roadblocks keeping people out of the area.

Traffic Alert | “On US 2 in between milepost 99 and 101 (Leavenworth), road closure for police activity. Travelers should utilize East Leavenworth Rd. for east-west travel through the area. There is no current estimated time for reopening. From milepost 99 to milepost 101. There is an unknown ETA for reopening.” – WSDOT. Original update 2053 PT.

Shelter-In-Place | Cascade Medical Center and all those on the outside of downtown Leavenworth.

Leavenworth has an area of 1.25 square miles which was created in the 1960s with its Tudor style architecture, Bavarian Village type outdoor shops, restaurants, and hotel. Today, the destination is home to just over 1,900 residents with about 24.4% of have German ancestry but thousands visit and play here all year-round.

To learn more about this great little destination, you can visit the Leavenworth, Washington Chamber of Commerce Home | Leavenworth Washington. 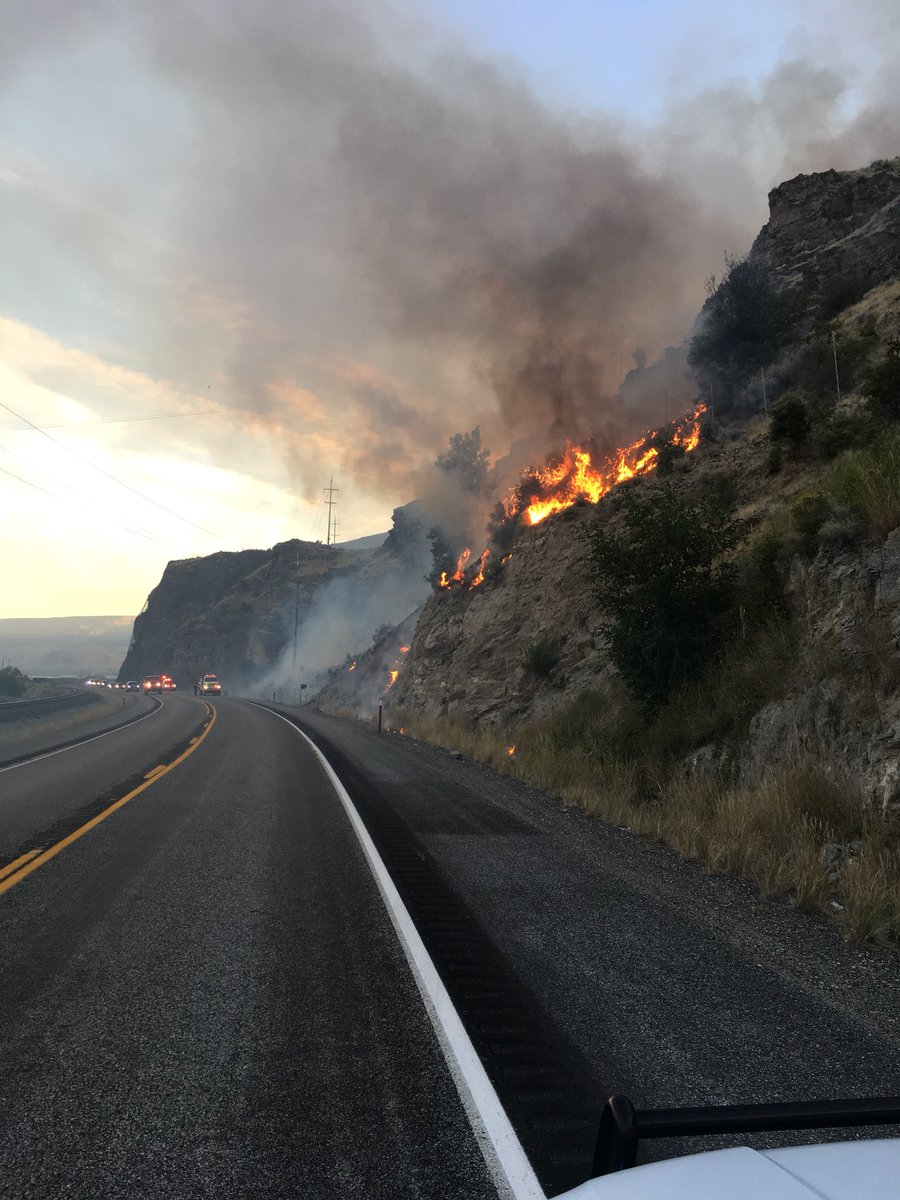 A brush fire is burning up the hillside above the Rocky Reach Dam, located about 7 miles north of Wenatchee towards Chelan in Chelan County, Washington.

Smoke over the highway has been causing poor visibility and safety concerns for drivers.

State Patrol states this is the second fire today in Central Washington.

WSDOT crews are en route for a full closure of 97A this evening from Wenatchee to Entitat.  Drivers are being encouraged to take a DETOUR around US97 on the Douglas County side as a detour.  There is still no ETA when this roadway is going to reopen (2205 hours)

Washington State Patrol has shutdown a portion of the US Hwy 97A at milepost 204 , in the Rocky Reach Dam to Swakane Canyon Road.  (2045 hours)

Incident Summary:  A wildfire has broken out on S Wenas Road in Selah, Washington.  Due to dry and hot conditions, the fire has scorched 400 acres.  State Mobe has been approved and is/has been deployed to the area.

Evacuations (as of 6/27/17 @ 2340):  Selah residents in the vicinity of Collins road have been given evacuation notice due to the fire growing to 500+ acres. The fire was close to being contained but high winds helped it to strengthen and grow.

Shelter:  The Red Cross has set up shelter at the Selah Civic Center and it will be open by midnight.

Incident Summary: A report of 3 separate grass fires started burning near the Alcoa/Malaga area 5 miles SE of Wenatchee later merged into one wildfire now called the Spartan Fire (renamed from the Alcoa Fire).

Resources:  There are 160 personnel deployed on this fire.  State Mobe has been approved on Wednesday, June 28, 2017.

Size/Fuels:  About 4,500 acres of grass and brushy fire fuels have been consumed.  Fire crews have been able to gain a 10% containment status.

Incident Summary:  The Southern Canyon Fire formerly known as the Southern Fire is now incorporating 5 fires, that were also reported in the Palisades area 8 miles South of Wenatchee in Douglas County.  It is now being called the Sutherland Canyon Fires.

Size/Fuels:  There have been 3,000 acres of grass and brushy fire fuels with a 10% containment status.

Resources:  There are 75 personnel assigned.  A Type 3 IMT assumed command at 1000 hours on June 27, 2017.  State Mobe has been approved and will be starting to receive incoming fresh crews.

Incident Summary: A report of 3 separate grass fires started burning near the Alcoa/Malaga area 5 miles SE of Wenatchee later merged into one wildfire now called the Spartan Fire (renamed from the Alcoa Fire).

Resources:  There are 160 personnel deployed on this fire.

Size/Fuels:  About 4,500 acres of grass and brushy fire fuels have been consumed.  Fire crews have been able to gain a 10% containment status.

Fire Managers:  “Overnight hand crews and dozers successfully held the fire to the north of Colockum Road and west of Alcoa Highway. The most active fire spread was reported to the Southwest.

On Tuesday, June 27, 2017 with the return of dry, windy conditions, firefighters and multiple air resources will continue to build fireline and engage the fire when it is safe to do so. Firefighters will use existing roads, dozer lines, water drops and natural features wherever possible to limit future fire spread in this area.” – Unified Command

Level 2 means to be ready to leave in an instant. There are approximately 80 structures threatened in this area. Level 1 evacuations are in place for the Sutherland Canyon Fire from the Columbia River to milepost 10 along the Palisade Road corridor.

There are approximately 24 structures threatened. There have been no reported loss or damages to structures on either fire.

Incident Summary:  The Southern Canyon Fire formerly known as the Southern Fire is now incorporating 5 fires, that were also reported in the Palisades area 8 miles South of Wenatchee in Douglas County.  It is now being called the Sutherland Canyon Fires.

Size/Fuels:  There have been 3,000 acres of grass and brushy fire fuels with a 10% containment status.

Other Non-Reported Wildfires from Monday, June 26, 2017

The department has issued an emergency order that imposes restrictions beginning June 30 on agency lands east of the Cascades. The new rule prohibits:

WDFW owns and manages over 700,000 acres in eastern Washington. The restrictions in these areas will remain in effect until conditions improve and the risk of wildfires decreases, Wilkerson said. Any changes will be posted on the department’s website: http://wdfw.wa.gov.” – “Cynthia Wilkerson, WDFW Lands Division Manager.