Incident Summary | Firefighters were dispatched at 2134 hours on Wednesday, August 2, 2017, to a brush fire near Malden (Whitman County) in Washington State.

Size Up | Unofficial statements of this being a fast-moving wildfire with a high rate of spread (ROS) and 350 acres destroyed have been reported by media sources.

Resources | State mobe was approved on Wednesday and fire assets should be either on-scene or pouring into the area on Thursday, August 3, 2017. 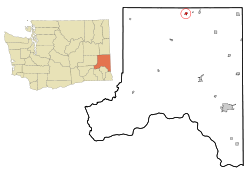 Malden is a tiny town with a population (as of 2015 census) of 202 residences in a .67 square mile radius.  It’s community is located in Whitman County just South of Spokane, Washington.