SCOTLAND — It has been at least thirty days since rain has fallen in various regions and provinces in the Country and they are starting to feel the real pain of wildfires breaking out everywhere. 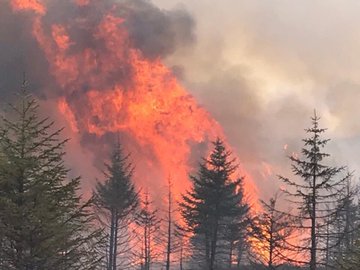 Social distancing and people staying home more due to the global pandemic may also be reasons why fires are increasing more than usual Fire Officials are reporting.

A massive firestorm is burning in Galloway Forest Park.

The cause of this fire is unknown but the Fire Service states there have been a high number of arson fires, which they say are unacceptable.

Community support for their firefighters has been overwhelming and most appreciative with loads of replenishing foods and beverages. 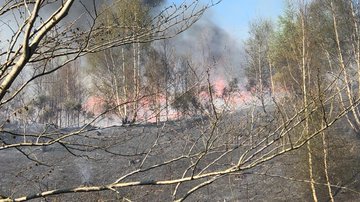 Other Countries such as AUSTRALIA, POLAND, RUSSIA, SIBERIA, and UKRAINE are also seeing increased perfect conditions making it more than too obvious fires are going to be sparking.  Warm temps, dry conditions and no rain in some parts are a very bad combination.  Others have seen an uptick in arson fires, more so than ever before the Coronavirus hit their Countries and around the Globe.

More notable wildfires such as the one burning in the area or were burning in the  Exclusion Zone of the Chernobyl NPP in Ukraine .  Fires have been breaking out all across the area, making it difficult to breathe and causing more harm than ever before.

The Chilean people have been suffering for many years as the Country has been plagued by a severe drought, which has covered most of their Country.  No one knows that more than the Country’s Firefighters and Police Officers.  They too have suffered along with their own people they are sworn to Serve and Protect.

The severe drought began between the years of 2009 – 2010, worsening as each year passes.

Large-scale wildfires are breaking out all over this region. Evidence collected/analyzed shows arson fires starting in several places in the severely drought-ridden areas and showing the results of the perfect firestorm that has come to life.

Unknown Numbers:  We are working to gather the #s and will provide an update as information is received.

Air Tanker Pilot – A SEAT Air Tanker Pilot of was killed on December 28th when his plane crashed approximately 15 km or 9.32 miles near Santa Juana after working on a wildfire in the Bio Bio region.

2 Police Officers:  Their stories are unknown at this time.

LOOKING THROUGH THE EYES OF SOCIAL MEDIA

What people are saying about these fires is shared in this section of the post.

“We just performed three segmented drops in one load. We are on our way back now to reload.” – Global SuperTanker (1/27/2017)

“US @GlobalSuperTank in the air supporting Chile during the ongoing wildfire state of emergency.” – Media (1/27/2017)