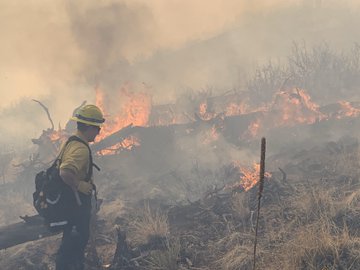 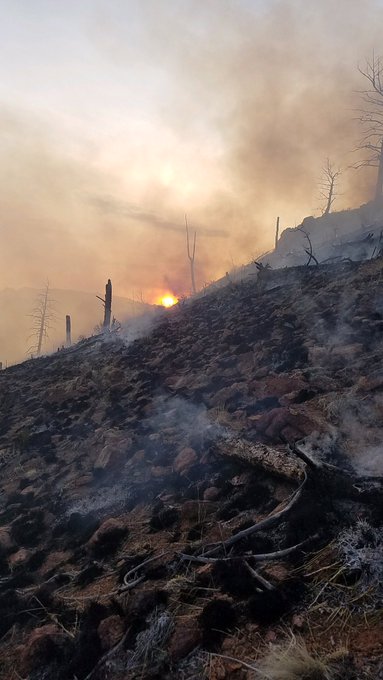 Firefighters and equipment were dispatched to the fire located off of 560 Road and about three miles northwest of Cheesman Reservoir in Colorado.

23 Firefighters are currently assigned to this incident.

There has been 68 acres of grass and standing dead and downed trees destroyed.

This was an out-of-control fire  but crews have successfully reached a 60% containment status.

No structures are under threat.

Wildland fire crews will continue to secure the firelines and mop up hotspots.  A bulldozer has been building a fireline in areas where it is safe and accessible.

Danger to crews remain as dead and downed trees could pose a fall hazard. 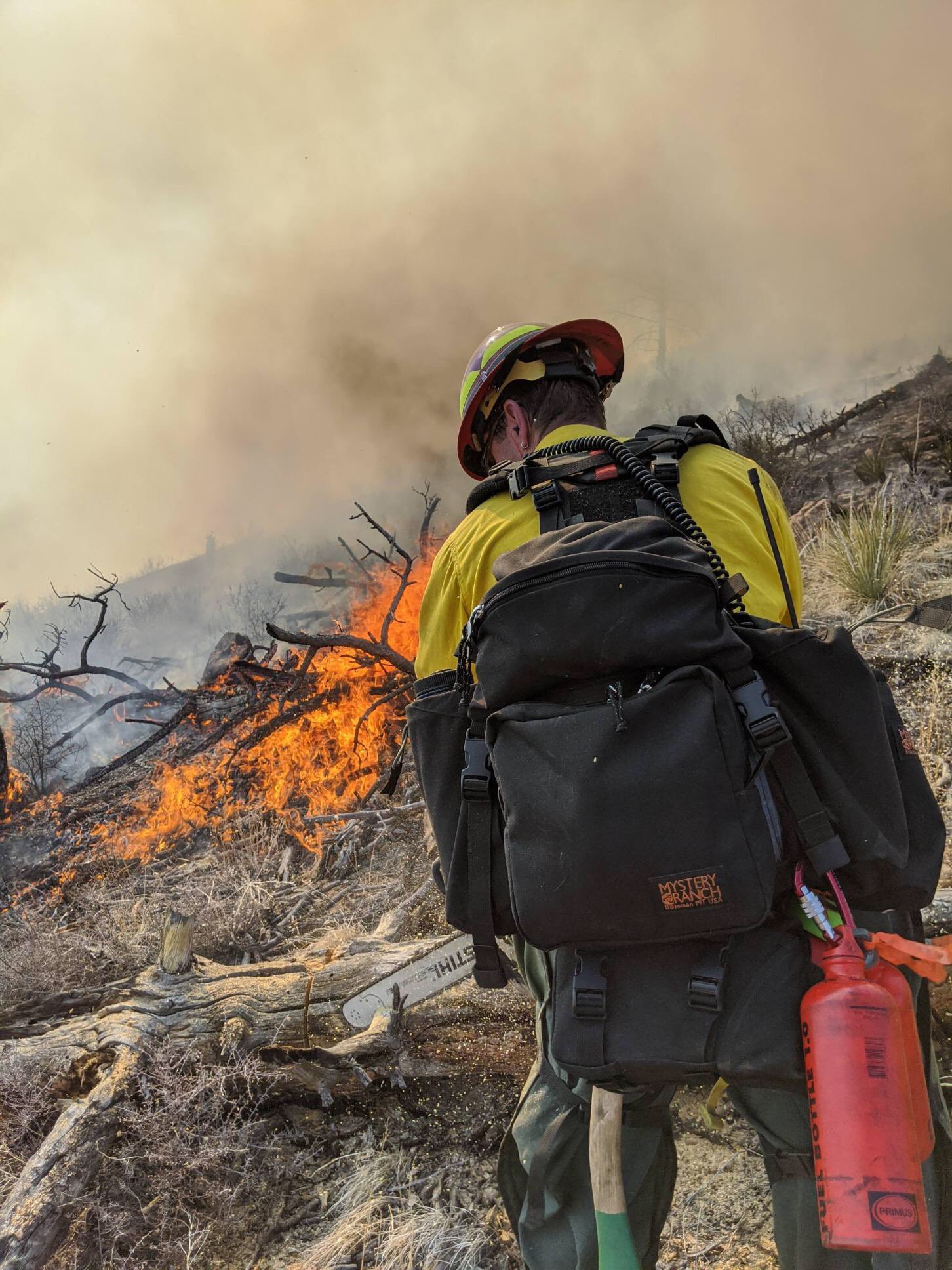 Smoke will be visible as fuels continue to burn on the interior.

A wildfire prompted fire personnel and equipment to be dispatched around 1142 hours MST on Sunday, July 21, 2019.

The fire was reported by multiple calls from the general public and from fire lookouts around 1100 hours.

The fire’s cause has not been released and is currently under investigation. 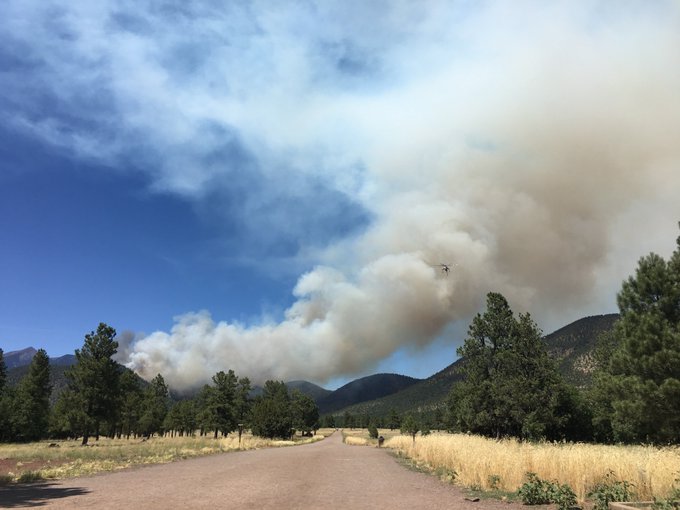 The fire is located north of Flagstaff, near Schultz Pass Road.

A Type 1 IMT Team 2 (SW IMT) is on order and will take command over this wildfire at 1800 hours MST on Monday evening.

The Coconino County Emergency Management and City of Flagstaff collectively, have activated the Emergency Operations Center (EOC) in support of this wildfire named the MUSEUM FIRE.

The Coconino County Sheriff SAR members are assisting with evacuations.

For emergency notifications and other notices, go to coconino.az.gov/ready .

A grass fire sparked by a driver on Highway 350 in Otero County, Colorado was charged for starting the wildfire on July 14, 2019, in the early afternoon on Sunday.

Otero County Sheriff’s Office and Fire units from the outlining areas responded to the fire which at the time was determined to be likely from a vehicle.

Firefighters were in mop up operations at 1448 hours PDT. The estimated amount of acres burned were around 20 but this could have been so much more worse.

Nice work, firefighters and Sheriff’s Office for your great egress and teamwork! – Ed.

Opinion | Did You Know? You can prevent these types of Fires

Never park your vehicle on grass on the side of the highway as the hot vehicle exhaust pipe can burn the grass underneath and cause a fire.  If it is a windy day, the wind can pick up the fire and spread it around on very dry fire fuels around your vehicle.

Not only is this preventable, but also will be a cost saver for the one that is being charged for fire suppression assets and law enforcement costs.  We are pretty sure, there is a hefty fine that will be sure to included in that amount too.

Thank you for reading and following our post!  Here is the compiled list of wildfires for the State of Alaska on Saturday, July 6, 2019, for fires greater than 1,000 acres.

Some fire activity on the southeast flank of the fire.

Crews to engage in direct attack strategies with point protection activities on values at risk. Structure protection in and around homes north of the fire and in Northway.

Fire behavior active increased on the north and east flanks mostly with minimal growth on the interior.  Working to prep for structure protection in the north and south areas of the fire.

Air recon flight this afternoon and in the evening detected increased fire activity with running to the southwest prompting structure protection. Heliltack responded and with remain in the area. Fire has crossed the Dishna River on the northeast corner and western perimeter.

Increased fire behavior with short runs and backing. Spreading mostly to the north and east.

Being managed by an IMT3.  If fire continues to grow, concerns for high assets may become threatened which include multiple structures, camps and communication equipment. Burnout operations in effect.

Increased fire activity on the interior and burning at a low rate of spread with the west side more actively burning along with uphill runs and backing down the ridge. No structures threatened.

Fire weather has been consisting of sunny skies, temps in the upper 70’s, lower RH of 38-45% range and winds that were terrain driven.

Working to secure fire perimeter along the east and north along the Chatanika River area.

Fire started on BLM owned lands on 6/21/2019 by lightning in the Central Yukon Field Office area.

10,889 acres. 16 personnel.  Fire behavior has had minimal activity but there is still heat located on the northeastern and eastern areas of the fire.

Fire ignited after lightning hit the area, spark this fire on BLM owned lands in the Eastern Interior Field Office’s response area.  The fire started on 6/18/2019.

24,891 acres. 47 personnel. Fire behavior is active with smoldering, creeping, running and torching.  It is burning in spruce, mixed hardwoods and tundra.

1,049 acres. 8 personnel. Air recon flight completed and fire is about 30% active with smoldering and creeping in white and black Spruce.

Fire started on 6/5/2019 by lightning and is burning in the Kenai National Wildlife Refuge (USFWS).

Containment lines are holding in Divisions A, R and K. Div P had growth to the northeast.  Air fire suppression activities are primary focus.  Crews are continuing to maintain mop up operations north of the Homer Electric transmission line and along the East Fork Moose River. Night shift is patrolling the Sterling Hwy for smoke conditions which AK State Troopers are monitoring and providing traffic control when heavy smokey conditions arise for traffic on the Hwy.

There were 5 new wildfires that occurred within the last 24 hours that were under 1 acre  Four of the 5 were human caused. 1 was undetermined and reached a total of destroyed 40 acres. 9 personnel are still assigned to the incident.

Benton County, Wa. – A wildfire ignited from an unknown cause on Thursday, June 20th, at approximately 1540 (3:40 pm) hours PDT in the area of South Meals Road and East Toothaker Road, near Finley, Washington.  The location is also approximately 80 miles ESE of Yakima,  Washington.

The fire has destroyed 100 acres of grass and brush in the Heaven Hills area.  It was limited to this number of acreage due to a precipitation producing storm that fell over the fire line on Thursday night.  Fire Managers estimated there was a 75% containment status reached.

As of this morning (6/21/2019), the fire response had been reduced to just two engines.  They were being tasked with mop-up operations and putting out any new hot spots.

There was no injuries to civilians or firefighters reported.

No homes or outbuildings were reported as damaged or destroyed.

Eastern Washington State has increased their Preparedness Level and they are reporting the Fire Danger at an all “HIGH” level for the time period of June 19 – July 3, 2019.  The Fire Service all across this portion of the State is asking for you to be very careful when burning outside. The only fires allowed are: recreational and warming fires, as well as agricultural burning.  NO residential burning is being allowed.

Firefighters quickly contained and brought the fire under control today at 1415 (2:15 pm) this afternoon.

Fire fuels included Duff.  The total acreage loss was less than one acre.

Current Fire Status | The fire has destroyed about 397 acres of short grass and brush.  Crews have reached a 70% containment status.

Resources | There are about 31 total personnel assigned along with 10 engines.

Incident Summary | Fire personnel and assets were dispatched today at 1340 hours PDT to a brush fire in the town of Tahuya is near Crosby in Kitsap County, Washington.

Fire Fuels, Size Up | The fire, as of 1700 hours, has destroyed 22 acres of brush, slash and reprod timeber.

Status | Windy conditions are challenging ground firefighters and helicopters working on the wildfire.

Cause | Cause is unknown at the time of this posting.

Fire assets were dispatched on June 8th around 1006 hours.

There has been about 397 acres of grass and brush destroyed.

A wildfire ignited just before noon on  Friday, June 7th, located approximately eight miles east of the nearest town of Cave Creek, Arizona.  It is about eight miles of the Cave Creek Ranger District office and near Horseshoe Dam Road turnoff.

The fire was caused by human intervention from an unknown ignition source.  The cause is currently under investigation.

The fire has destroyed 7,225 acres and there is still a 0% containment status.

It is being reported to be burning on the Tonto National Forest and east and northeast towards Bartlett Lake and Horshoe.  The nearby Bartlett Dam Road and Cave Road have both been shutdown.  This closure is to continue throughout the weekend.

A helicopter is currently dipping out of the Barlett Lake.

There are currently 243 total personnel assigned to this wildfire along with fire assets that include multiple air tankers and a helicopter.

Command was assumed by the Central West Zone Type 3 IMT at 0600 hours this morning.

Additional resources are on order. 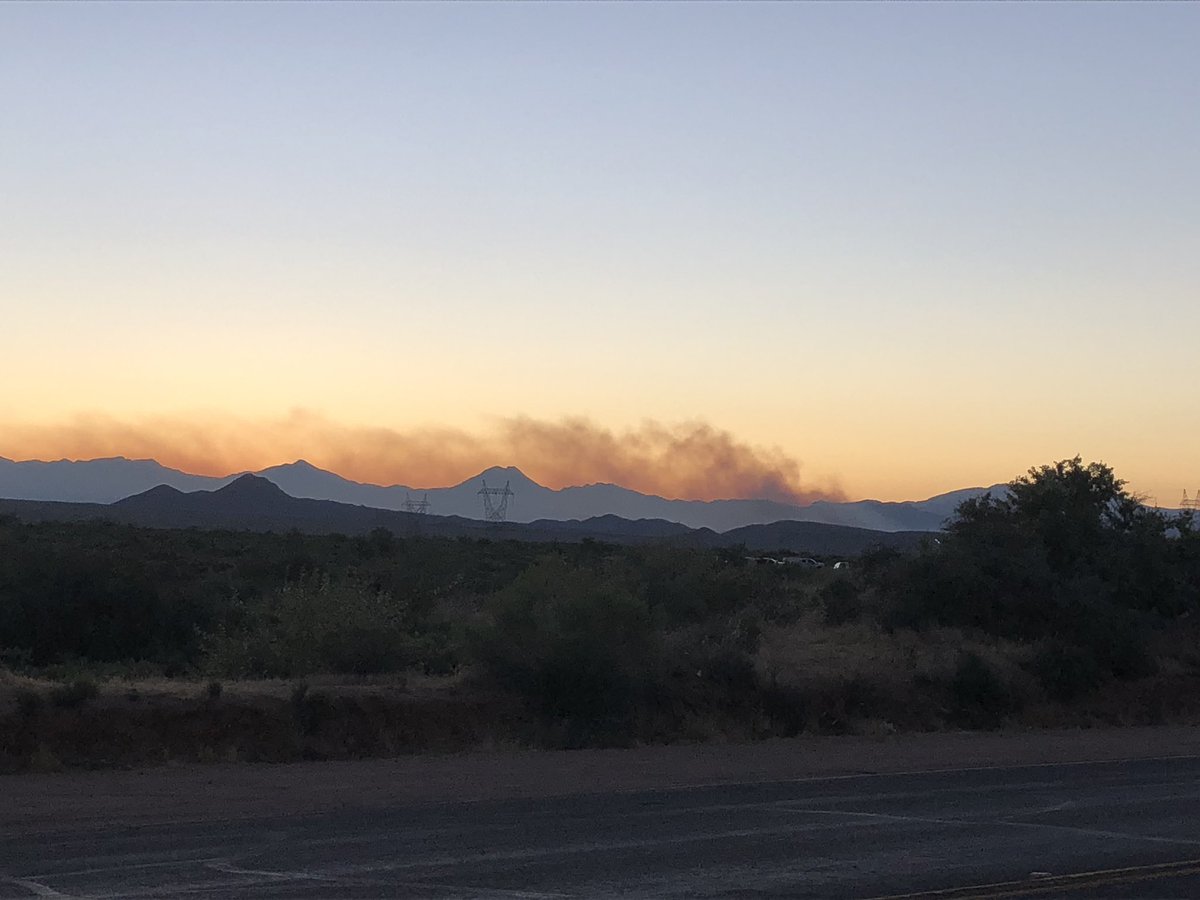 The Maricopa County Sheriff’s Office was assisting with the mandatory evacuations of those in the Bartlett Lake users and campers who had remained in the area, after voluntary evacuations were issued on Friday, June 7th.