EPHRATA, Wash. – A fire erupted inside an Ephrata residential structure, sending heavy billowing dark smoke outside and observed by many.  The fire broke out on July 4, 2018, on Wednesday from an unknown cause.

The house fire is located in the 100 block of L Street NE where firefighters from Ephrata and the Grant County Fire District 13 responded.

Both Ephrata Police Department and the Grant County Sheriff Office were also on-scene of the fire.

Fire crews are currently battling this fire and limited details are available. 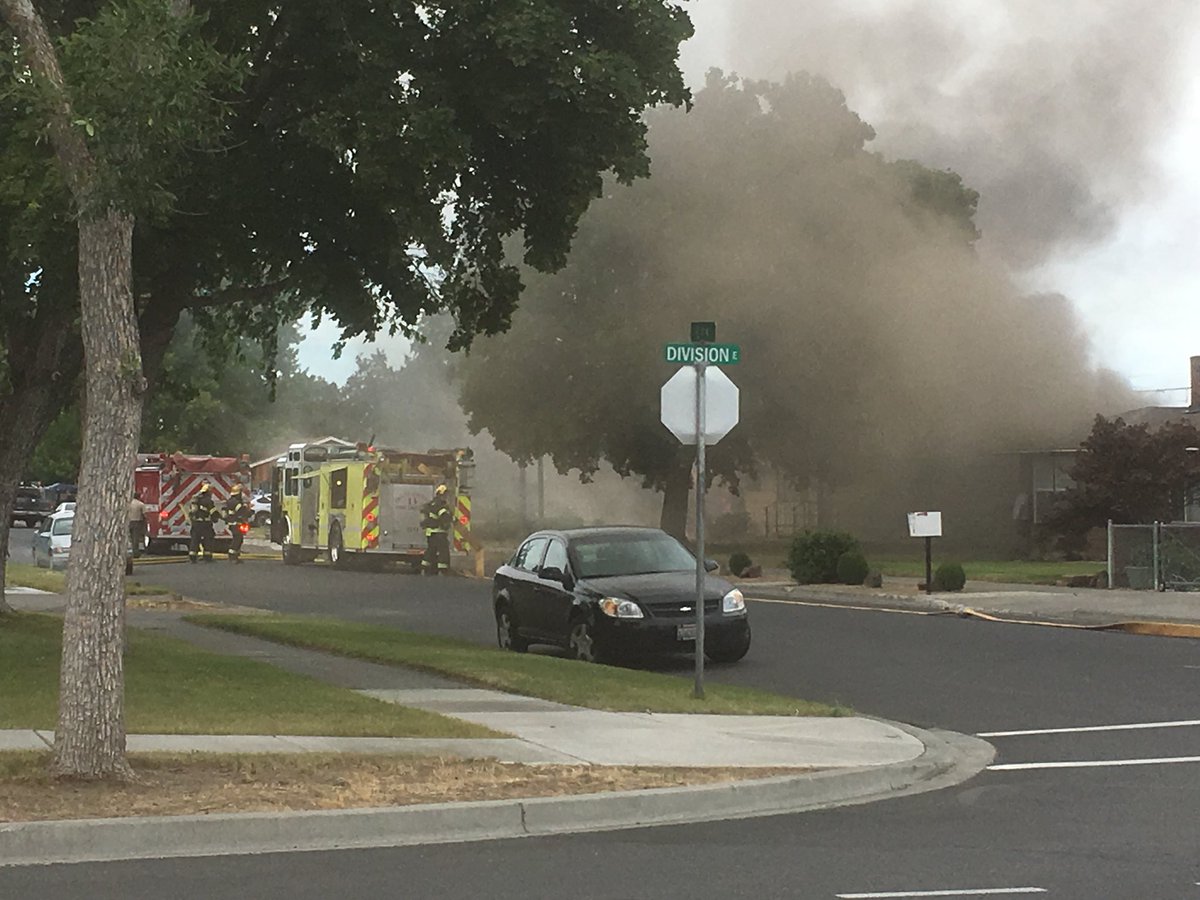 No injuries to casualties or firefighters have been reported at this time.

No preliminary cause of the is known at this time.

There is no Grant County Public Safety feed due to being offline.  We will provide an update if anything changes. – Ed.

Hello and thank you for following The NW Fire Blog!  We are happy you on board as we work to cover all things Fire, including wildfires.  Due to the high number of fires around the Country, we will be breaking them down individually starting with the Northwest and working our way around to each State.

Location – This wildfire is burning along SR 17 (NB) near milepost 60 and is approximately seven (7) miles North of Moses Lake, Washington.

Date/Time Started –The fire began Tuesday, August 2nd at 1500 hours.  Officials have not released the cause of the fire.

Fire Fuel/Winds – The fire is burning in heavy sage and grass and being driven by N-NE winds up to 24 mph gusts (as of 1500  hours PDT). Weather had picked up a little around 1845 hours.

Movement of the Fire – The fire has jumped several roadways including SR17 and Rd 10.  It was said to be burning parallel to County Rd 10NE.

Current Fire Conditions – As of 1935 hours, reports of the winds decreasing seemed to be good news for all but the reality is the fire is still burning but now under control.  It is no longer running/the forward spread has been stopped.

Damage Assessment – Word of several homes and outbuildings lost are now trickling through to the Sheriff’s Office.  No number is available at this time, nor does the County have a good estimated number of acres burned.

Area Burned – The Sheriff’s Office did not know the size of the fire @ 1500 hours but had said the fire had scorched at least 2.5 miles from the point of origin.  Another source, Washington State Emergency Management Agency said there has been between 4,000 and 5,000 acres burned.

Horses/Livestock  – Grant County Sheriff’s Office Posse are out in various areas with trailers to help with evacuating large animals.  The Sheriff’s Posse will also be available on site to help with horses.  Call 9-1-1 to tell them where you are, if you need assistance with getting your animals/livestock out. Tell them where you are located/address.

Red Cross – A shelter has been opened at  Grant County Fairgrounds located at 3953 Airway Drive NE in Moses Lake, Washington, where the large animal shelter is also located. This is for overnight accommodations for evacuees.

Grant County International Airport – The airport has a terminal and restaurant available for fire evacuees. This is temporary shelter, no overnight accommodations (per Sheriff Office)

Large Animals – Large animals are also being taken at the Shelter hosted by Grant County Fairgrounds.

Closures – SR17 in both directions @ Mileposts 60-63 (Between Moses Lake and Ephrata). No ETA on when the roadway will reopen

Evacuee Resources/Offers of Assistance – Art Brown/Light of Larson Church. 509.350.3720. Can help at Shelters.

Evacuee Resources/Grant County Animal Outreach – can hold companion animals for residents who need to be evacuated.

Fire Resources/State Mobe –  A State Mobe was requested and approved and will be arriving to assist with the fire in a few hours.

Horses – Some are recommending that residents release their horses to fend for themselves to save their own families, while others are working tirelessly to help evacuate them to a safe haven.

Ephrata – The fire is not impacting Ephrata but residents in this area are concerned.

Evacuations – Some are asking if they need to  leave the Desert Oasis Park and how will they be notified.  We recommend to continue following our Blog and check back with the Grant County Sheriff’s Office Facebook Page for updates.

Please stay away from the Fire!  Though it is very tempting to stop in the middle of the road and take a photo, think before you drive!  Those of us who are actually Fire Photographers know to stay out of the way of 1st Responders, the dangers of being too close to the fire and taking our own personal safety in an account.

The Sheriff Office is warning drivers to stay away from the fire. Too many are putting themselves and 1st responders’ lives in jeopardy to rescue people out of dangerous situations. And, because you can get fined. Don’t be that guy.

No Drones In Fire Zones!  Though there have been zero reports of them flying in or near the fire, don’t become the first person to test the system.  If you fly, you will force air resources to land putting lives, property and other assets in danger.