Here is a recap of both Washington and Oregon wildfire activity for the beginning of this week, from May 15, 2020.

Here is a recap of both Washington and Oregon wildfire activity for the beginning of this week, from May 14, 2020.

Here is a recap of both Washington and Oregon wildfire activity for the beginning of this week, from May 11 – 13, 2020.

“Camping isn’t yet permitted, but we’re already responding to escaped campfires. These illegal fires take time and resources from our firefighters. Please obey the rules and remember: If it’s too hot to touch, it’s too hot to leave.”  – WA DNR 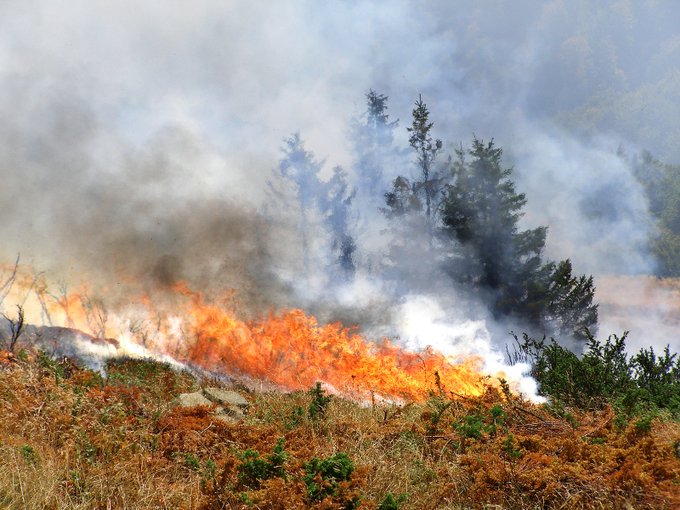 A wildfire broke out in southwest portion of the State on Thursday.  The fire is located on Heppsie Mountain Road off of Highway 140, mile post 20, just east of Eagle Point, Oregon.

Firefighters were able to quickly contain the portion of the fire on private industrial land which was turned back over to BLM last night.

This wildfire was called the Heppsie Mountain Fire.

A wildfire sparked by lightning caused the dispatch from the Blue Mountain Interagency Dispatch Center of fire assets on Friday, August 17, 2018 at 1230 hours PDT to the Graves Creek area.

This is the last update for this wildfire.

A wildfire was sparked by lightning in the Graves Creek area in the service area of the Oregon State Department of Forestry.

Resources were dispatched on Friday, August 17, 2018, at 1300 hours where resources were said to be en route or on-scene.  The fire was fully contained on Friday at 2121 hours.

There was 0.5 acre of grass burned.

Current Fire Conditions | Fire conditions include active fire behavior with wind-driven runs.  About 400 acres of land has been consumed.  The fire has a 59% containment status.

Resources | There are 58 personnel assigned to this incident with 24 engines.

Damage Assessments | There has been no structure reported as damaged or destroyed, however, cost-to-date expenses have reached $16,000.

We all knew this day was coming and were expecting it to be really bad again year as weather forecasters predicted.  We are talking Wildfires Exploding in the great Pacific Northwest touching many lives, homes, businesses, livelihoods and hearts everywhere.

Over the weekend there were seven (7) fires burning in Washington and Oregon alone.  Today, there are more popping up everywhere.  Here is a recap of the current fires burning in both States.

Due to time constraints, we have left off a few from our list and will be adding those on Wednesday.

The Bybee Creek Fire started on 7/28/2016 from an unknown cause that is currently under investigation.  The fire has consumed up to 425 acres and has a 10% containment status.

Fire crews will be working fire on the East side up the Pacific Crest Trail; South on Lightning Springs Trail and West of Crater Lake Rim Drive.

The temps have been in the 70’s with a 19% humidity.  Fire restrictions are at a Stage 1.  Visitors are not at risk and the Park is still open.

The Rail Fire has consumed 1,000 acres of lodge pole pine but has reached a 50% containment status. This fire started on 7/31/2016, is said to be two (2) miles long and one-half (1/2) mile wide.  It is burning timber and logging slash. Fire behavior is extreme with crowning and group torching.

There are four (4) engines, two (2) crews, one (1) bulldozer assigned to this fire, with a total of 100 personnel.  An Air Attack has been ordered for Tuesday, August 2nd.

The Weigh Station Fire is about 688 acres with a 25% containment status, thanks to a very productive day today.  However, evening winds did pick up but lines held. There has been little fire activity, enabling fire crews to mop up to 300-feet from the control lines.

This wildfire is very active, burning in grass and timber with torching and spotting.  As of this morning’s press release, the fire had only burned 10 acres and a 0% containment status.  The cause is unknown.

Firefighters are continuing to  improve lines and constructing fire lines.

The Antilon Lake Fire is said to be burning near Manson, Washington that has consumed up to 540 acres.  It has reached a 65% containment status, despite flare-ups this afternoon.  It was started by equipment failure on Friday, July 29th.  There is still an ongoing investigation into the cause.

Fire personnel include those from the U.S. Forest Service, WA Dept. of Natural Resources (DNR) and Chelan County Fire District #7.  Additional resources include 150 personnel, two (2) helicopters, 10 engines, two (2) tenders, along with a Fire Boss Scooper that dipped out of nearby Lake Chelan.  Two (2) Type-2 Helicopters were also assigned to assist ground fire resources.

This 99-acre fire is burning mostly in heavy stands of timber along the Naches River, about 25 miles West of Yakima.  On Sunday, July 31, 2016, Halfway Flat and Sawmill Campground were evacuated.  As a precaution, Camp Roganuda Christian Camp/Retreat and Conference, along with 25 homes in the Stillwater/Crag summer homes were also evacuated.

The fire behavior is very active.  Structures are still being threatened. Evacuations are still in effect.

Resources include: 70 Interagency USFS personnel, along with DNR, rural county Fire Districts with the assistance of two (2) – 20-person crews, three (3) engines, one (1) overhead team and Airtankers and Helicopters as needed

No structures or injuries have been reported.

Thank you for following and reading our blog posts!