Two wildfires broke out in Florida dubbed the #30thStFire and #FrangipaniFire that were said to have started on Thursday, April 20, 2017. 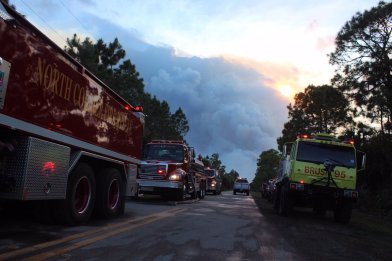 The 30th Street Fire broke out around 1050 Hours PDT at 3280 30th Avenue SE and Everglades Boulevard that started out as a brush fire.

Here is the timeline for this fire.

1150 | Brush fire.  DOF helicopter arrives on-scene. E32 arrived with Engine Strike Team. Moved out of Staging to mop up hotspots as fire progresses.  The fire is now moving Westward away from the Everglades Blvd.

Both Fires are reported as one managed wildfire incident

1543 | 30th Street Fire is at 600 acres moving Westward and may have mandatory evacuations per the County Emergency Management office.  Red Cross is providing resources for Firefighters.

1544 | Alert:  Smoke is a respiratory irritant that may cause a scratchy throat, cough, headaches or irritated eyes.  Avoid prolonged exposure.

1634 | Both wildfires are still 10% containment status but fire activities are decreasing due to increased RH.

2308 | No other reports from sources reporting on this incident.

The cause of these two wildfires are unknown at the time of this posting.