Incident Summary | The West Mims Wildfire was ignited by lightning on April 6, 2017, and continues to grow daily.  It is located approximately 2.5 miles northeast of the Eddy Fire Tower in the Okefenokee National Wildlife Refuge and about 7 miles East of Fargo in Georgia.

Much of the fire has either bumped into the swamp edge or been contained on the north and west sides of the fire. Southwest winds on the fire today have rotated fire direction and the southeast corner of the  fire is being tested from Soldiers Island to the east side swamp edge break. Fire on Billy Island and  Strange island continue to flank south where fuels are available.

Fire Status | Fire has increased to 94,664 acres and still at 8% containment.  Fire Managers report most of yesterday’s fire growth resulted from the fire edge gradually backing south and flanking east in active fire areas south of Strange Island and east/south of Mitchell Island. 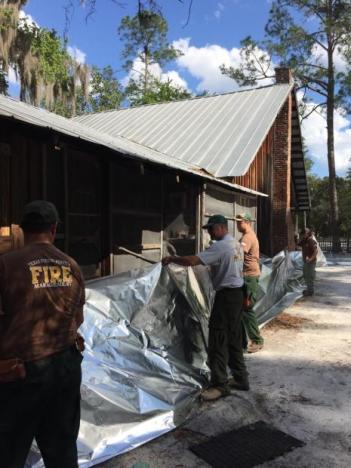 Incident Summary | The wildfire was sparked by a lightning strike on April 6, 2017, has now destroyed 21,308 acres of timber (grass and understory) and southern rough.  Crews have reached a 3% containment status.

Correction:  This wildfire is located 2.5 miles NNE of Eddy Tower on south end of Okefenokee NWR in Georgia.  It was previously reported in Oklahoma which was incorrect.

We will work to prepare operations at the  Type 1 helibase at the Fargo golf course.

Night shift operations will commence from 2000 to 0800 hours with a firefighters on the line.  We will continue to strengthen control lines.  Additionally, we will monitor fire activity and check for  hot spots, recon potential control lines and examine area for hazards and identify areas that need to be mitigated.” – FWS

Incident Summary | The wildfire is located 2.5 miles NNE of Eddy Tower on south end of Okefenokee NWR in Georgia.  The fire started on April 6, 2017, reported at 1700 hours PDT.  Fire Behavior is  active, wind-driven runs and creeping.

Resources | Resources are en route to the fire.