Incident Summary – The Teanaway River Fire reportedly started around 1330 hours on Friday, October 6, 2017, near mile marker 5.5 on the Teanaway Road near Cle Elum, Washington.  The cause was deemed to be recreational shooting on private property.

Resources – Kittitas Co. Fire District #7 was first due but would be later joined by WA DNR and other statewide Fire Districts. State mobe had been approved and were said to be assisting as well. the Southwest Washington (SE WA IMT Type 3) Interagency Type 3 Team 3 had assumed command as a State Mobe resource under direction of the State Fire Marshall’s Office.  There are still approximately 200 fire personnel still assigned to this incident. 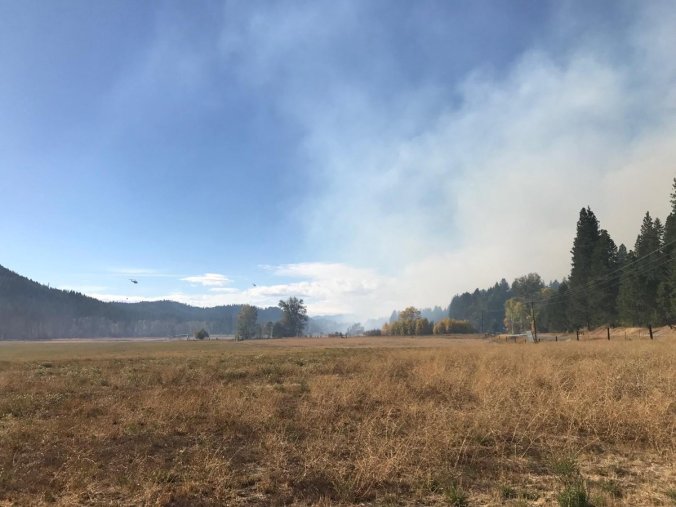 Command – The Incident Command Post or ICP is located at the Kittitas county Fiar and Rodeo Grounds located at 901 East 7th Avenue, Suite #1 in Ellensburg, Washington 98926.

Current Fire Status – The fire scorched several hundred acres of land and was stopped at 341 acres by actively working fire crews.  As of Monday, October 9, 2017 (today), fire crews were working on removing smoldering stumps and putting out hot spots in the fire’s interior.   Crews have reached an 80% containment status.  Officials expect the fire to be fully contained by Tuesday, October 10, 2017, at which point the ICP will be terminated putting all fire resources back in service.

Evacuations – At the beginning of the fire incident, there were approximately 20 homes that were under direct threat.  The Kittitas County Sheriff’s Office conducted Level 3 (Leave Now) and Level 2 (Get Set to Leave) evacuation orders.  The Red Cross opened a shelter for those who had been ordered to evacuate. By the time all of the orders have been established, there were 40 in total.  All orders have been lifted by the Sheriff’s Office.

Damage Assessment – One outbuilding was reportedly burned. It is unknown if it was completely destroyed or just damaged.