A second BNSF train has derailed at the intersection of SR22 and Phillips Road, about two miles east of Mabton in Yakima County, Washington.

The 116-container train was derailed when it was hit by a semi-truck with a piece of farm equipment on it ripping about six box cars and three engines from its tracks.

This occurred on Wednesday, December 23rd around 1055 hours PT, just one day after another train derailed in Custer, Washington around 1140 hours PT. The cause of that derailment is still under investigation.

Images were taken of the train by the Yakima County Office of Emergency Management via using a drone of the disaster. The latter two photos are from the YCFDPIO.

Washington State DOE is currently assessing the wreck for any potential fuel leaks.

There were reports of minor injuries to the train crew but no fire or HAZMAT issues personnel having to work with.

INCIDENT SUMMARY | Multiple wildfires are burning in Union Gap, Yakima and on the Yakima Fire Training Center.  There are multitudes of other incidents happening including MVAs, rescues, evacuations, etc.

REHAB | (Rehab 50) was established in Staging in a church parking lot, west of 44th and S Ahtanum Ridge.

ALERTS |  To find out more about emergency alerts, go to the Yakima County website and sign up at https://www.yakimacounty.us/222/Alert-Yakima

Evacuations | 3600 Block | Residents on S 79th are refusing to evacuate.  FD having a hard time getting people to flee their home.

Evacuations | 40th Avenue |  One adult male refused to evacuate, saying he will take full responsibility for his actions if he does not come back out again.

Threatened | 4200 Block |  Fire moving west, threatening a structure and 1 manufactured home.  Fire were responding to more fire at 4215. They were going to provide structure protection.

Evacuations | 6200 Block | Notifications made to residents south of 62nd to close to Ahtanum, to Red Sky to 20th will be their boundary.

Hazard ID | 6400 Block | Power pole has been burned at the base and has tipped over. Utilities has been notified.

Evacuation | 7621 Block | Residents were being evacuated from this address.

Evacuation | 7900 Block |  Notifications are being made to those of East of 79th to South Ahtanum.

Evacuations | 8300 Block | x Summit Avenue. Were given to those north of this area due to flames.

Point-of-Origin | 2000 Block | FD determined appears that this area may be the point-of-origin and wants to meet up with Tribal Police.

Hazards | 2000 Block | Several damaged power poles with some of them burned 50% all the way thru making them hazards. Yakima Power has been notified via FD Dispatch.

Resorces | 2000 Block |  Command is located at 2000 x Tule Road. A dozer is inbound and to access via Plank and Pioneer then to the south side of the fire.

As of 2340 PT, some fire units were slowly being released. This was definitely an intense and scary brush fire incidents and will continue throughout the night as they work put out hot spots and continue with extensive mop up operations.

We will post an update on Monday with any new information and if preliminary causes have been released.

Current Fire Status | The fire has destroyed about 397 acres of short grass and brush.  Crews have reached a 70% containment status.

Resources | There are about 31 total personnel assigned along with 10 engines.

Fire assets were dispatched on June 8th around 1006 hours.

There has been about 397 acres of grass and brush destroyed.

MOSES LAKE, Wash. – A Level 1 evacuation alert was issued by the Grant County Sheriff’s Office for all residents in the area from Sage Road to Camas Road in Moses Lake.

UPDATE | 2306 | Per the Sheriff’s Office, they cancelled the evacuations after receiving info that the wildfire was put out.

BLM-13 was dispatched by the Central Washington Interagency Command Center for a smoke check at 2227 hours and an immediately  the Sheriff’s Office issued the evacuation alert for a fast-moving wildfire on Sand Dune Road.

Current fire weather conditions are 71*F with winds at 8 mph, partly cloudy and a humidity of 36%.

The fire is called the SAND DUNE ROAD FIRE.

YAKIMA COUNTY, Wash. – Local Fire crews were dispatched at 1424 hours on Sunday, July 1, 2018 to the area on the 800 block of Suesanna, just outside of the Naches area.

State mobe resources were approved, dispatched and on-scene quickly.  Those that have arrived last night and this morning have been full-on in engagement.

0741 | Fire has grown to 4,000 acres. Crews are battling fire under windy conditions and difficult terrain today. Firefighters from all over the State of Washington  are due to engage the wildfire on the fire line.

1112 | Fire behavior becoming more active. Helos and air tankers are dropping water and retardant on a spot fire on the ridge above and visible from Naches.

1453 | Fire Weather Watch issued for Benton, Columbia, Franklin, Klikkitat, Walla Walla & Yakima counties for Wednesday afternoon thru the evening of July 4, 2018, due to low humidity and gusty winds, as reported by the National Weather Service.

1523 | AA continues.  Copters dipping out of the water source on South Naches Road.

1714 | AA continued throughout the day. Windy conditions biggest factor. Helicopters have been able to make dips and drops over the fire.

1939 | 5,200 acres. Dozens of engines, 4 aircraft responded today.  Crews will be working throughout evening on night operations. 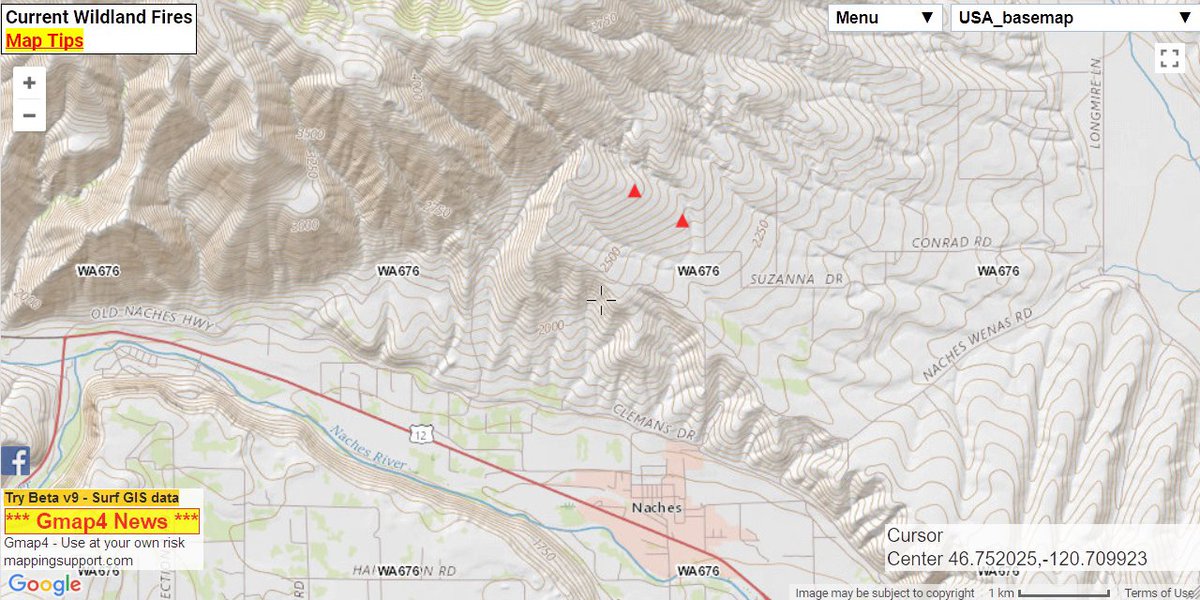 FIRE CAD ACTIVITY – WASHINGTON STATE | Here is a recap of wildfire activity in various regions of the State.

A vegetation fire has exploded on to the fire scene from appears to have been from an unknown cause, that has now turned quickly into a firestorm. The fire is located at the end of Boundary Road, near Mabton, Washington State.

If you fly, they can’t. #NoDronesInFireZones

Glade Fire on the West side of Red Mtn in Benton City. (Photo Credit: Brandon Coughlin)

SOCIAL MEDIA | Observers can see the smokey haze from Walla Walla and Sunnyside.

SCANNER FEED | Want to listen in on what is happening on this wildfire?  Check out this Scanner Feed broadcasted on the Yakima City/County Fire EMS Tac channels here —-> http://www.broadcastify.com/listen/alert .

There has been 24 acres of grass and brush  have been burned.

Crews have reached an 80% containment status.

Resources include T15 R18 S26 have been dispatched.

Our next update will be on Saturday morning unless there are significant changes.

Fire Fact | There were 11 new wildfires reported in Washington State as of Thursday, July 6th with 3 being not contained. – NICC

Incident Summary | A wildfire named the Rattlesnake Hills Fire (also known as the Konnawac Pass Fire) broke out from an unknown ignition start on July 6, 2017. It would soon grow quickly with various Agencies and social media outlets reporting the fire up to 5000 to 5500 acres with a fast rate of speed.

Location | The fire is located approximately 1 mile from Moxee in Yakima County.