GRAND CANYON, Ariz. | Fire Managers will be conducting RX (Prescribed Fire) burn piles on the east and west sides of the South Entrance Road and south of Highway 64 (Desert View Drive) east throughout the month of May, 2019.

This will be directly in the Grand Canyon National Park. 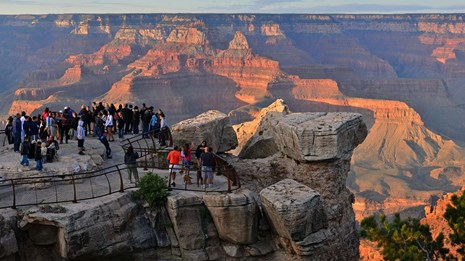 There are no closures at this time but the motoring public is advised to use extreme caution when passing through these areas.  Additionally, visitors should yield to all fire personnel, vehicles and listen to any instructions given to them during this time.

We will be following this story if fire escapes its containment lines or there is another pending fire in the park.  This is something that fire crews do often as preventing further heavy fuel fires from destroying many acres in and around the park.  It is also  to rejuvenate the environment and its dependent wildlife.

Grand Canyon National Park, AZ | A fire caused by lightning ignited the North Rim of the Canyon discovered on May 23, Friday.  This is in the same area as a previous fire from 15 years ago.

Firefighters were able to burn out along the handline from the canyon rim, around the cabin and tie into the W-4 road to confine the fire in that area.
[Credit: NPS photo]

The fire is burning Ponderosa Pine.