POST SUMMARY |  The tireless efforts of thousands of firefighters across the Northwest are beginning to make a dent into the many wildfires burning in our areas.

Nationally speaking, there were 121 new wildfires reported on Sunday, with them being light initial fire activity.  Four of them were new large new incidents.  There are a minimum of 38 not contained fires with 2 Area Command teams with 2 NIMOs, 16 Type 1 IMTs and 22 Type 2 IMTs committed throughout the United States.

Know a wildland firefighter or a deployed/previously deployed member?  Remember to thank them for their hard work in protecting properties and saving lives.  There are countless other Agencies and organizations that support these men/women on the fire line and interface with the communities they work to save.

Law Enforcement Officials have released preliminary investigation information on the Eagle Creek Fire burning in Oregon.  The cause of this fire is from discharged fireworks by at least one 15-year old and Police are seeking additional assistance from the Public to locate additional possible other teens seen in the area.

Here is our recap for Sunday, September 10, 2017, showing some have been downgraded to minimal fire behavior and much-needed rain occurring over the fire line. 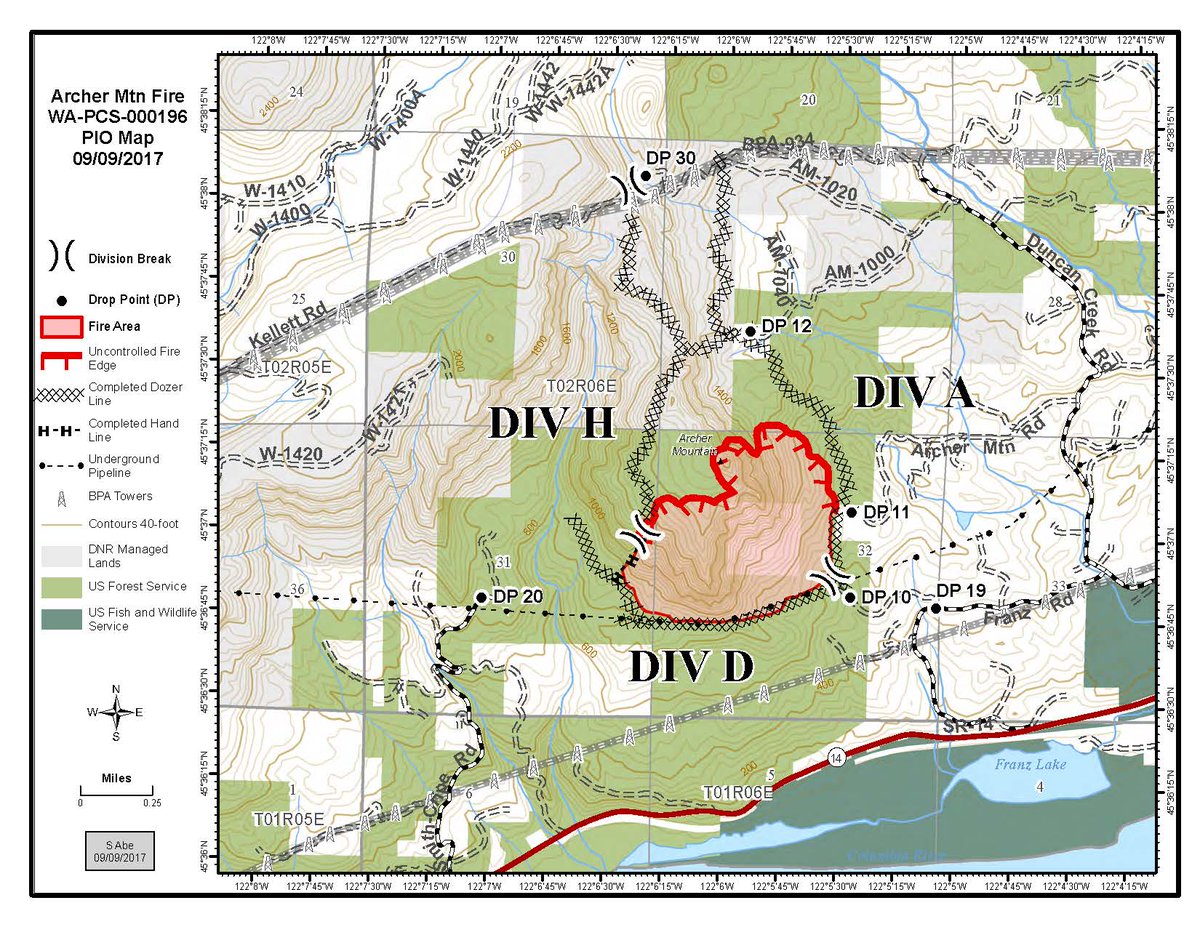 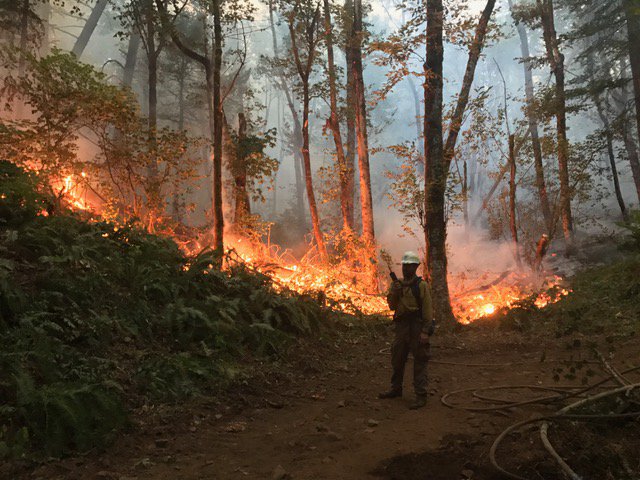 12 homes, 10 others are currently under threat.

110 personnel. 3 crews, 11 engines, 0 helicopters or any other equipment assigned.

3,711 acres. 98% contained.   Fire behavior is minimal with creeping and smoldering.  Firefighters to mop-up, secure lines, patrol and monitor fire.  To remove 34 miles of hose lines and pumps has been much completed.

100 personnel. 2 crews, 8 engines and 0 helicopters or any other equipment. 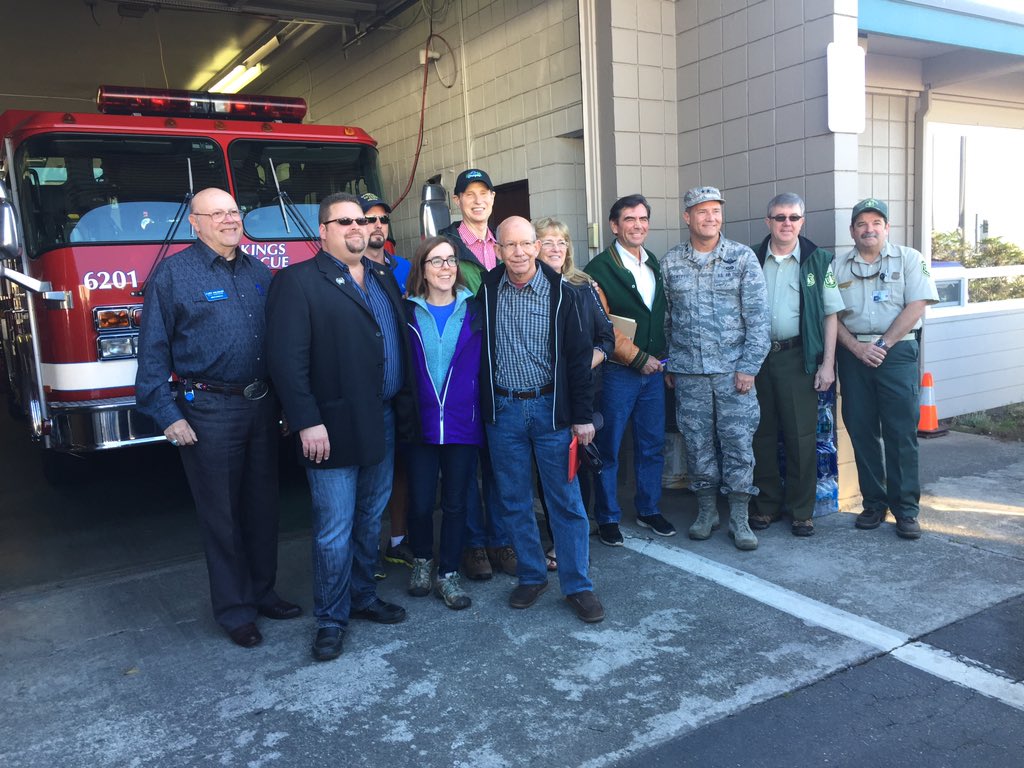 5 miles NE of Brookings , OR  (SW part of the State) on the Rogue River-Siskiyou NF in the Kalmiopsis Wilderness. Lightning caused.  Fire fuels include:  mixed conifer, brush and snags from previous fire scars (2002 Biscuit Fire and 1987 Silver Fire scars). #ChetcoBarFire

184,207 acres. 5% contained.  Minimal fire behavior with smoldering and creeping.  Flight recon showing low minimal flames and the fire stalled on tops of ridges above cool north-facing slopes and sites with green vegetation. RH has increased and fuels are retaining moisture from previously storms that have passed through the area.

The Northern side of the fire is showing more active fire behavior than the Eastern flank.  Fire crews have successfully secured established containment lines, totally 50 miles.  Today, hand crews will work closing small gaps in the fire lines on the Eastern flank.

Unified Command is made up of CFPA, OSFM and PNW Team 3.

TFR issued by the FAA is in effect.

Fire is burning in both the United States and Canada, as the fire had previously crossed over.  We are covering in both locations.

Recon air flight conducted over fire line and active fire at the head of Monument Creek with fire fuels to the South.  Weather was moderate overnight with increased humidity and lower temps.  The fire did not spread very much to the South.  Fire perimeter remains two miles North of the fire line that prompted a Level 2 evacuation in the Mazama communities.

Fire continues to burn in steep, rugged terrain in the Pasaytan Wilderness.

A break in the weather with moderate temps, higher RH levels and lighter winds has allowed Fire crews to make good progress on this fire.

Fire behavior is active with group torching, flanking and backing.  Smoke to remain moderate and to impact fire activities but not as serious as the day prior. 33,382 acres.  7% contained.  Estimated containment date is 9/30/2017. 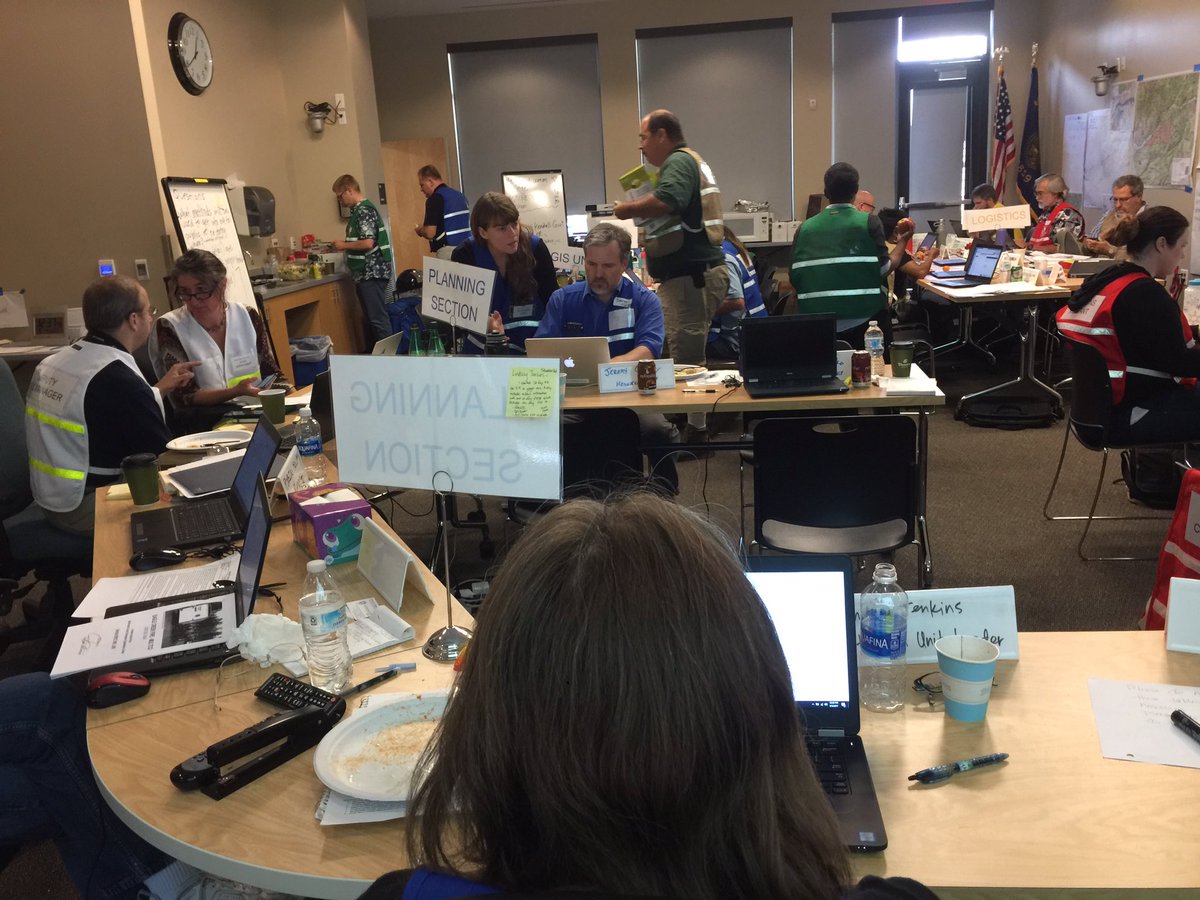 This IS what the EOC looks like during a Disaster and all the faces behind coordination/communication activities. Credit: Forest Service NW.

Level 1 Evacuations.  Public land West of Hwy 281 (Lost Lake area), North of Mt. Hood. Portions of Hood River. Area running from Collins Rd. in Dee at the South end of I-84 on the North end and all areas West of Country Club South to Reed Rd., running due South to Hwy 281 and along 281 to MP 12.5.  The Middle Fork of the Hood River until it comes parallel with the South end of Collins Road.  East of 257th, North of Stark and West of the Sandy River in Troutdale.  Mabee Mines Rd.

EAST CRATER FIRE.  Low temps, light rain has kept fire activities low and reducing fire spread to a minimal and fire size of 467 acres. Crews continue to remove trees and brush to prep roads on the East side as fire line to reduce fire spread outside of the wilderness. Fire has been burning in the Indian Heaven Wilderness since the fire started on 9/3/2017.

BEAR CREEK FIRE.  Saturday was aided by cooler temps and higher humidity enabling crews to make great progress securing the fire line and mop-up operations.  Crews will focus on locating remaining heat and extinguishing hot spots in the interior when safe to do so. Fire is 36 acres.  This fire is located 3 miles NE of Carson, Washington.  Concerns of protecting the Bear Creek Watershed remains on the top of their priority list due to the values at risk as this is the water supply for the community of Carson.

SIOUXION FIRE.  Gifford Pinchot NF, a 10-person crew from WA DNR and a set of fallers continued constructing line around the 2 acre ire.  This fire is located 1/4 mile off the Siouxon trail approximately 1 mile up from 5701 Road trailhead.

225 personnel. 6 crews, 14 engines and 1 helicopters with no additional equipment assigned.

There are 5 homes and 15 minor structures threatened.

PUP FIRE.   A spot fire was discovered on Saturday on the South flank of the Pup Fire in the Lone Prairie area.  Ground and aerial resources responded and quickly contained the spot fire to a single acre fire.

BROKEN LOOKOUT FIRE. Crews continued with  prep work on the north end of 6510 Rd.  Burnout and mop-up operations in effect.

69 homes, 23 mixed used and 100 minor structures are under threat. 1 structure has been destroyed.  Level 2 in the McKenzie River area downgraded from a Level 2 to a Level 1.

NASH FIRE.  4 miles from Elk Lake. Has burned almost to the edge of Nash Lake.  Crews will using a Lakota helicopter equipped with daytime infrared capability to determine exact location of the fire perimeter and areas of active fires.  6,376 acres.  #NashFire  Level 2.  Elk and Hosmer Lakes in Deschutes County.   Level 1.  Lava Lake and Little Lava Lake.  For Evacuation alerts, sign up through the Deschutes County Sheriff’s Office http://bit.ly/2f3NWMA. or call 541-693-6911.

OLALLIE LOOKOUT FIRE. 1,174 acres. The Lakota copter will fly over this fire along with the RONEY FIRE (3,135 acres).  Both fires show minimal fire behavior and are being monitored.

SEPARATION FIRE.  Fire crews are working both sides on the East and West of this fire burning on the North side of Hwy 242.  Copters are being used to assist with fire suppression and containment activities on the fire’s edge.

REBEL FIRE.  Crews completed containment lines along with FS rd. 19 (Aufderheide Drive) from Box Canyon to Cougar Dam.  They continue to remove fallen trees or ones that are threatening on FS Rd. 19.    7,706 acres.  $5,300,000 Cost-to-Date. #RebelFire

12 miles West of Riddle and 8 miles SE of Camas Valley, OR  on the Douglas Fire Protective Association lands. Reported 8/27/2017 around 1530 hours.  Cause is unknown.  #HorsePrairieFire

2 structures have been lost. 9 homes are threatened.

Minimal fire behavior with creeping and isolated single tree torching.  Fire was observed as having moved into the Jack Creek, Stuart and Eightmile Lake basins.

WA State Gov. Jay Inslee declared a State-of-Emergency for this wildfire and others across the State.  http://governor.wa.gov/sites/default/files/proclamations/proc_17-12.pdf

29,432 acres. 10% containment.  Fire is moderate behavior with backing, group torching and spotting.  Portions of the fire is backing with some group torching in pockets of unburned heavy ground fuels.  Estimated containment date is 10/15/2017.

The fire is currently backing towards containment lines on the West and East sides and is expected along the Northern perimeter.  Limited growth is expected.  On the West perimeter crews will begin construction of indirect fire lines South of Salmon la Sac to protect assets at risk to the North.  On the East perimeter, crews are firing areas in Jungle Creek and Johnson Creek to remove fire fuels.  Structure protection still in effect.

There are 4,204 homes and 1,073 minor structures currently still being threatened.

Start 8/10/2017 around 1850 hours.  Located in the Little Fall Creek watershed in the Willamette NF and 9 miles East of Fall Creek Reservoir, as well as 1 mile North of Clark Butte, OR. Lightning caused.  #JonesFire

Unified Command consists of the NW IMT Team #12, Willamette NF and the OR DOF. Command will be returned from the Type 2 IMT to a local unit today. 406 personnel. 12 crews, 17 engines and 3 helicopters.

4 homes and 1 minor structure is being threatened.  1 structure destroyed.

Green trees may be weakened by the 2003 previous fire.  Crews will continue to secure containment lines and mop-up operations.  Focus on the new Forest Service Rd 18 spot fire is being addressed.

Fire behavior is active with flanking and backing.  24,025 acres. 60% contained.  Fire crews will work to repair and rehab lines along the Northwestern fire edge.  Growth is expected to occur.

205 homes are under threat.

National Guard during a briefing on the Norse Peak Fire.

NORSE  PEAK FIRE.  49,997 acres.  12% containment. Crews continue to work on SR 410.  Smoke has increased and moderate fire behavior occurred due to under story fire fuels.  Fire is contained to the North side SR 410.  Fire creeping towards structures in the Crystal Mtn, Gold Hill and Silver Springs areas. Crews working hard to remove vegetation, establish handlines and sprinkler lines int he area. It’s been determined enough fire resources are in the area to stop any significant fire spread. Work on FS Rd. 462 is complete.

AMERICAN FIRE. 1,958 acres. Increased fire activity on Saturday with rollout (ignited materials) rolling down into unburned fuels.  Fire is now more active with uphill runs in under story in dead, down and ground fire fuels.  Air resources deployed and were very successful in limiting fire spread.  Structure protection in effect along Bumping River Rd. from the lake to Ira Ford Lane. Firefighters will continue to work their way North today.

No structures reported as damaged or destroyed.

Fire behavior is minimal as rain fell over the fire line on Thursday, September 7, 2017.

Located 50 miles East of Roseburg, OR and along 35 miles of the Hwy 138 corridor and spread throughout the North Umpqua and Diamond Lake Ranger Districts. Started as multiple fires.   Start 8/11/2017 around 1030 hours.  Lightning caused.  Fire fuels include Timber, tall grass and brush.  Complex has 9 active wildfires.

Majority were lightning caused and moved through the area in August.  Main fires separated into east and west zones.   #UmquaNorthComplex

Happy Dog Fire.  Mop-up operations on the primary containment lines on the East side to continue.

Task Force Spearhead being briefed at the ICP.

Fires are still threatening homes and is due to continue to spread and will continue threatening additional structures, as well power lines, road system, commercial timber values.

Task Force Spearhead.  10X Crews organized into 3X Strike Teams, overhead and support personnel US Army is providing ,conducted their last day of field training.  The unit is scheduled to be or is already operational today.

Fire behavior is active with torching, flanking and backing.