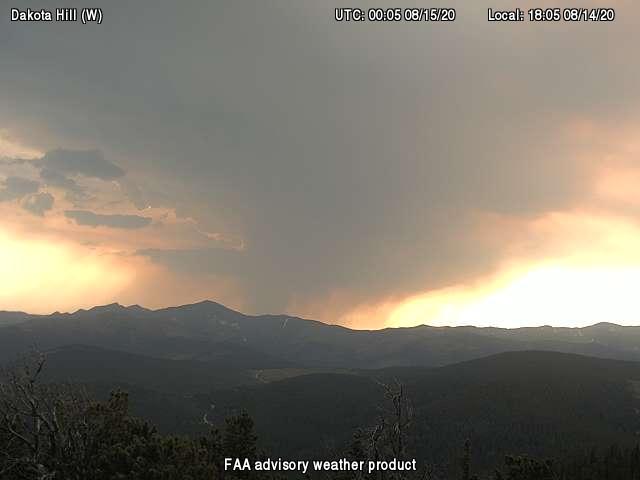 A wildfire is burning in the Arapaho and Roosevelt National Forest and Pawnee National Grassland, about 15 miles NW of Fraser in Grand County.

It is west of Winter Park and Denver in  the Fraser Valley and south of Hot Sulphur Springs.  This is located in the Ft. Collins zone, near Ute Pass in Colorado.

Fire suppression and containment expenses have reached $1 Million and is rising each day.

The fire has burned 6,000 acres. There is a 0% containment status.  Cause is unknown and under investigation.

Fire behavior is extreme with rapid rate of spread. 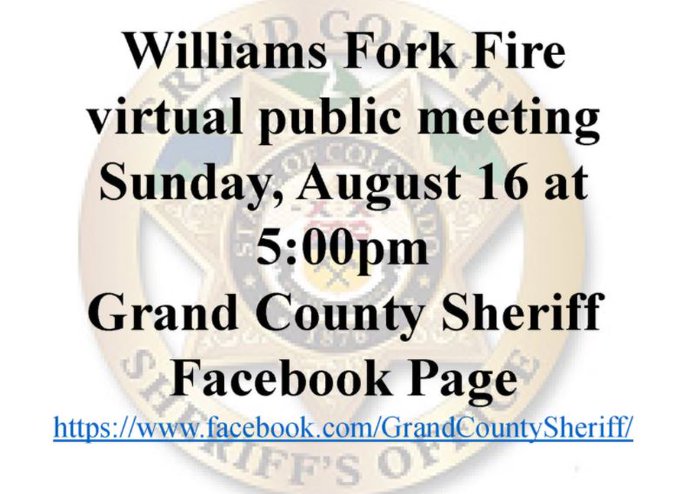 Road closures are in effect for the following areas:

CR 3 is open with intermittent closures.  CR 30 remains closed along with 50, which is closed near Young Life. 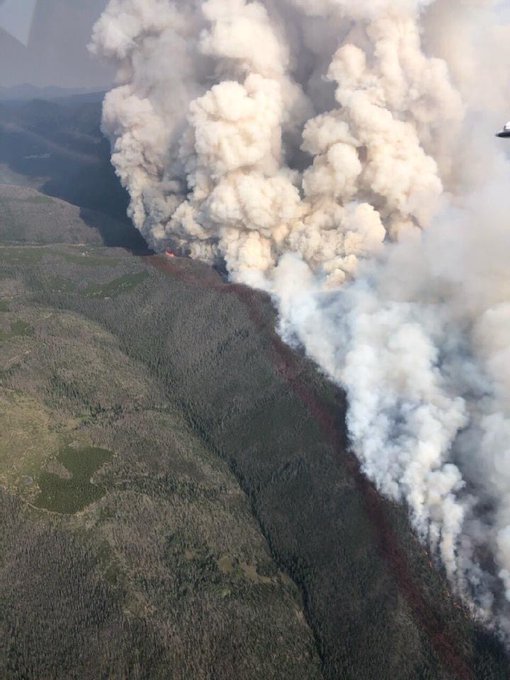 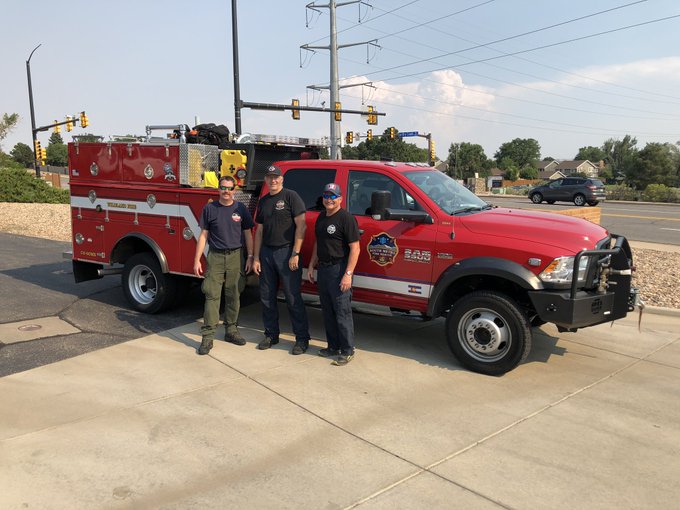 A wildfire is burning in the Arapaho and Roosevelt National Forest and Pawnee National Grassland near Cameron Pass and Chambers Lake; about 15 miles SW of Redfeather Lakes (Rocky Mountains) in  the State of Colorado. 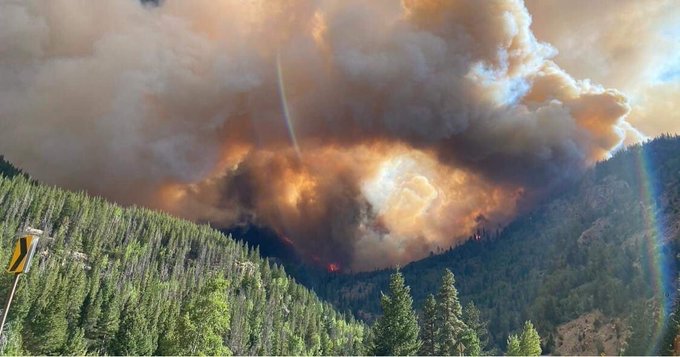 The CAMERON PEAK FIRE  started on August 13, 2020 around 1348 hours MDT from an unknown cause. It is under investigation.

Fire behavior is extreme with short crown runs and long-range spotting. The fire has crossed over Total acres destroyed, 10,867 and there is still no containment status.

Fire crews will continue with extensive structure protection and indirect suppression activities. Forest Fire Officials say it is too dangerous for a direct attack.

The biggest fire fuel in these Colorado National Forests are millions of beetle killed trees, dry and high temperatures making it perfect for a firestorm. No rain has fallen to help with fire suppression efforts.

The South Metro Fire & Rescue (Station 33) will be sending another wildland team to this incident. This will be a 3rd unit from the metro Denver area to assist as a mutual aid resource.

One helicopter was dispatched from Bozeman, Montana as a mutual resource.

Air assets include Tanker 911, a McDonald Douglas DC10 and multiple helicopters (have been working since Day1)

No structures have been reported as damaged or destroyed.

The expenses for fire suppression and containment efforts have reached $564,000 and are climbing rapidly each day. 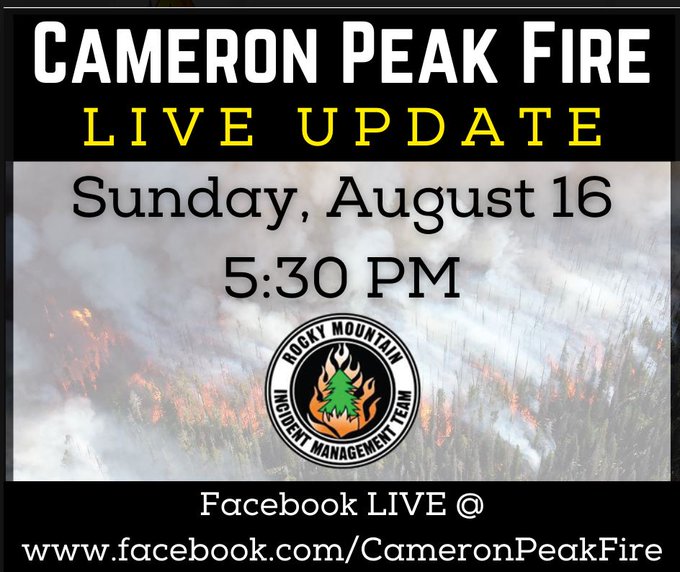 There is a Temporary Flight Restriction or commonly known as a TFR, meaning NO DRONES IN FIRE ZONES.

Today’s been the worst air quality in northern Colorado for a while. – Local resident with Asthma

A large smoke column can be seen from Shadow Mountain Lake in Grand Lake. – Local resident

Another smoky morning in the Canyon. – Local resident

I cannot believe people are still out rafting in the Poudre Canyon right now! Lower PC is safe but who wants to be in all that smoke? – Local resident

Finally getting some more air support on this fire with several LATs (Large air tankers) and one VLAT (Very large air tanker) in addition to the helicopters that have been working since Day 1. – Local Meterologist

Like much of Rawah Wilderness/Roosevelt NF is made up of mostly beetle kill which leaves it vulnerable and full of unburned fire fuels.  Going to be very hard to contain. – Local resident/hiker

A wildfire is burning in the Arapaho and Roosevelt National Forest and Pawnee National Grassland, about 15 miles SW of Redfeather Lakes, Colorado.

The fire started on August 13, 2020 around 1348 hours MDT from an unknown cause. It is under investigation.

Fire behavior is extreme with short crown runs and long-range spotting.  There has been 5,100 acres of timber litter that has been destroyed.  There is a 0% containment status.

Structures are threatened. Evacuations in effect. Road Closures in effect.

Fire crews will continue to identify and protect valued assets, as well as keeping the fire north of CO Hwy 16.

The weather forecast is expected to continue to deteriorate with hot temps, dry and breezy conditions, ripe for fire weather.

The USFS is the lead agency with the RM Blue Team, a Type 2 IMT assumed command this morning at 0600 MDT.

About 108 total personnel are deployed on this incident along with 4 crews, 7 engines and 3 helicopters.

None reported to structures or infrastructure.

No injuries to civilians or firefighters reported.

“Smoke in Larimer County is turning the sun orange. Some ash landed on me earlier.” – Eyewitness account

“The sky is telling me that Poudre Canyon will not be the place to go camping this weekend.” – Area resident 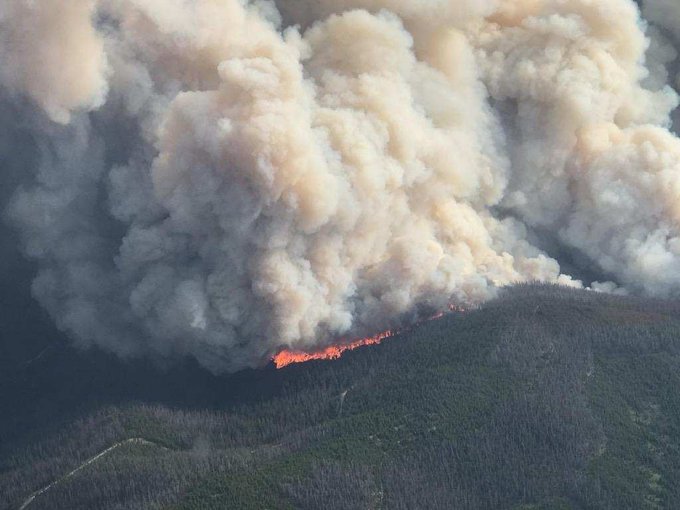 A wildfire is burning in the Arapaho and Roosevelt National Forest and Pawnee National Grassland, about 15 miles NW of Fraser in Grand County.

It is west of Winter Park and Denver in  the Fraser Valley and south of Hot Sulphur Springs.  This is located in the Ft. Collins zone, near Ute Pass in Colorado.

Fire behavior is extreme with crowning and flanking.  Structures and energy infrastructures are under direct threat.   There has been 1,300 acres of timber, litter and under story that has been destroyed.

There is a zero containment status.  The cause is unknown and under investigation.

Structures and the Henderson Mill and all of its infrastructure are under threat, along with multiple utilities in the area.

On Friday afternoon (Day 1), heavy air support and resources were on-scene supporting up to 50 firefighters from many different mutual aid agencies.

Overnight extreme fire burned and growing significantly.   It was moving east-northeast towards Church and reached the top of Kinney and Darling Creeks. At one point, it was held at CR 30 and south of Keyser Creek.  It is said to be burning in a remote area of the upper Williams Fork Valley, which has been impacted by an intensive beetle kill in the early 2000’s.

This afternoon, fire behavior is due to increase due to winds and temps rising.  Fire is moving in a northeast direction.

Fire weather is expected to continued with hot, dry and windy conditions throughout the weekend. 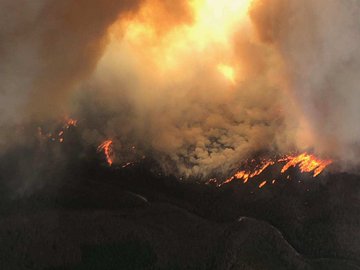 A Type 2 IMT is on order, which will take over from the current Type 3 IMT managing the fire.

There are 93 total personnel assigned along with 1 crew, 8 engines and 2 helicopters. IC is currently LeBlanc.  More resources have arrived today from the 50 firefighters from mutual fire agencies from Summit and Grand Counties.

Road closures are in effect for the following areas:

CR 3 is open with intermittent closures.  CR 30 remains closed along with 50, which is closed near Young Life. 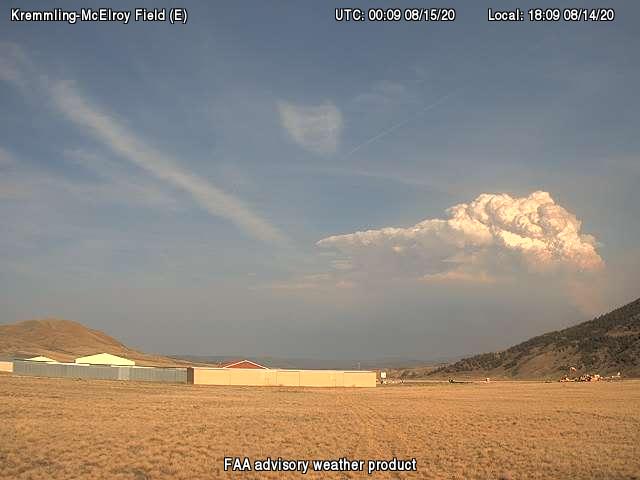 Mandatory evacuations are in effect for:

CR 30 on the west to Church Park.  From the St. Louis Creek Road on the east to the Darling Creek drainage to the south.  Sugarloaf and South Fork Campgrounds are also included.

A $50,000 cost-to-date in fire suppression and containment expenses has been reached. 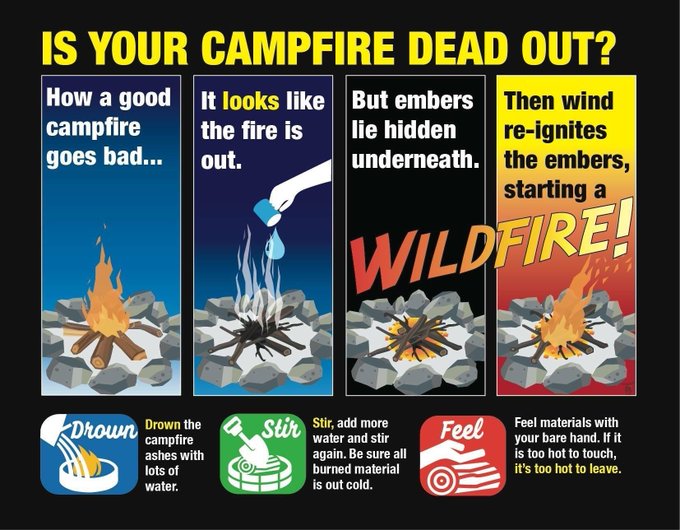 “Another fire burning, I am afraid to say.” – News media

“This is the fourth active wildfire burning in the state.” – Twitter user 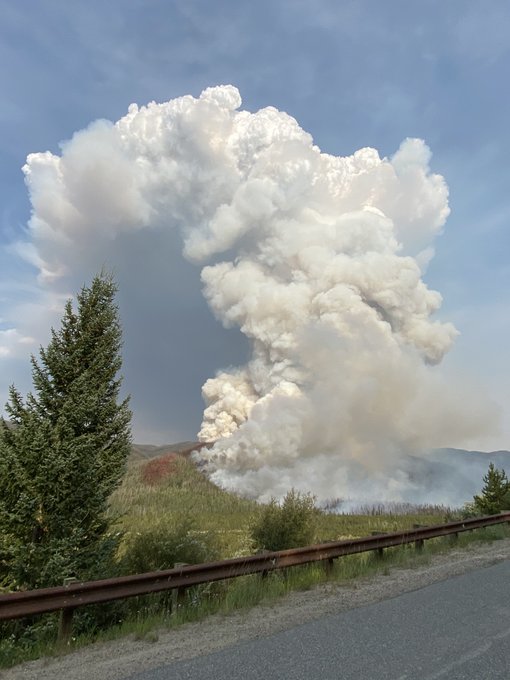 “This is crazy. People are still coming into Grand County while a major wildfire is burning a short distance away. Air quality is horrible. Outdoor activities are still ongoing.” Eyewitness account

“A smoke plume can be seen in Summit County, this is just outside of Idaho Springs.” – Eyewitness account

“Lots of flames. Good news, it is closer to the metro area so planes can get to it faster.” – News media

“Smoke can be seen from Soda Springs Ranch along Hwy 34.” – Eyewitness account

“A smoky haze is now over the Dillon Reservoir and Breckenridge.” – Eyewitness account

A wildfire started by lightning on May 8, 2017, around 1515 hours on the Tonto National Forest, about 6 miles South of Globe, Arizona.

This is a lightning-caused wildfire.

Firefighters have been able to gain a 70% containment around the fire.

There has been 7,171 acres destroyed.

A wildfire started by lightning on May 8, 2017, has not seen any type of fire since 1952!  So, as you can imagine there is a lot of heavy fire fuel to burn.  Generally speaking, this area sees fire every 2-17 years, says the Forest Service.

The fire is located approximately 6 miles South of Globe Arizona and burning on the Tonto National Forest.  It has destroyed 4,375 acres and is at a 21% containment level.

Firefighters are having to conduct suppression and containment techniques in rugged and steep terrain.

The current fire behavior is being considered as moderate, flanking, backing with short-range spotting and single tree torching.

There are currently 383 personnel assigned to this incident, some from the Gila County Emergency Management, Red Cross and the U.S. Forest Service.

Chelan Complex:  Includes Wolverine Fire:  5 mi E of Chiwawa Valley, near Stehekin. First Creek Fire:  Moving along Slide Ridge. Some parts of the fire are 3 miles from Lake Chelan, while others area near the Columbia River are contained. 644 personnel. 88,104 acres. 40% contained.

Grizzly Bear Complex:  20 miles SE of Dayton, WA, burning on Umatilla NF on the Wenaha-Tucannon Wilderness, private lands and lands protected by WADNR. 60, 272 acres.  New Fire:  Green Ridge Fire. near Little Turkey trail. Started 8/24/15. Bear Ridge Fire:  100 acres. Grouse Flats:  in mop-up operations.  Notes:  14 miles containment line around the fire.  125 National Guard to arrive on Sunday to assist with mop-up ops.  They will be based E of the fire near Flora or Troy, OR.  Total personnel is 676 with 59,200 acres total burned and a 5% containment status.

Announcement:  The Fire Managers are asking the Public NOT provide food as firefighters are on strict diets and must maintain their high energy levels, their health and to remain in tip top shape.  However, if you would like to donate please contact the Wildland Firefighter Foundation or the American Red Cross. – Thank you.

We will add more fires to this list, as time allows.

Thank you for following us this evening and, may you be safe wherever your shift or journey takes you.

Community members, campers, employees, visitors and all others are welcome.