A verbal dispute ignited in gunshots with multiple people involved and shot. A total of eight people were shot resulting in one death, a 50-year old patient in critical condition and in surgery, while a 9-year old was listed in very serious condition.  Five others were said to be in stable condition.

SFD Chief Scoggins:  “We transported five patients to HMC and we were told that the hospital is treating seven total.  There is unknown information as to these two additional patients, if they were walk-ins or self-transported to the facility and they are working on gathering additional information.  There were a total of eight people were shot, including one deceased person.”

SPD Chief Best:  “There was a dispute in front of the McDonalds where people out pulled out guns and shots were fired.  It is unknown if this shooting is connected to the earlier afternoon incident on 3rd and Blanchard.  Still gathering information on the number of suspect(s). Multiple people were involved but they are still investigating.” (7:45 PM)

Here is a tally of what has been happening this month alone:

Police radio traffic on the scanner feed switched over to a Tactical channel and then the feed eventually stopped transmitting. (8:00 PM)

A presser was released on this incident. (7:45 PM)

Police were dispatched to the Washington Convention Center located in the 700 block of Pike Street, Seattle.  The suspect was described as a black male, thin build, 6’1″, wearing gray jacket and black turtleneck pulled over his face. He attempted to force his way into the Center but they are currently on lockdown.  Security Guards were reporting this as possibly to as the shooter’s same description. (7:30 PM)

Mass Casualty Incident or MCI for short |  Another shooting in the downtown area.  Shooting in this area with multiple victims. Police say suspect fled but they were still searching for him. They were assisting with First Aid treatment of the multiple patients. (5:11 PM) 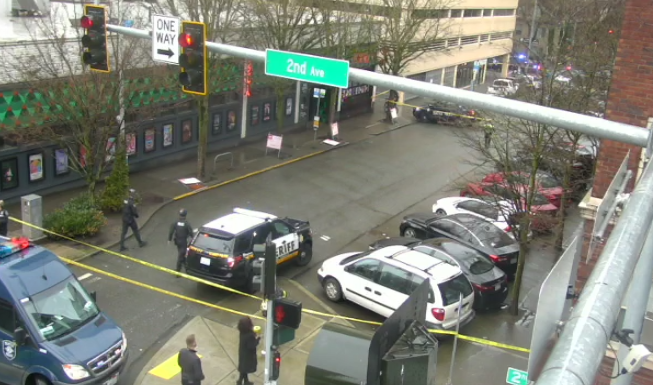 Officers were dispatched to this area for a shooting.  3rd Avenue has been closed to all traffic, while they are investigating.  (3:00 PM)

Officers from Seattle Police and Deputies from King County Sheriff’s Office were involved in this shooting.  The suspect has been transported to Harborview Medical Center for treatment of non life-threatening injuries. No officers or deputies were injured during this encounter. Force Investigation Team detectives are responding. (3:19 PM)

SPD Officers were dispatched near Pine Street. 1 person found with a gunshot wound was located in the stairwell of the Westlake Center. The 55-year old later died of his injuries.  Officers performed CPR on the victim until they were relieved by Seattle Firefighters and Medics. (3:45 PM)

A concerned citizen stopped a SPD Officer to report a possible drunk driver passed out next to vehicle.  The responding Officer found the victim to have a gunshot wound to his head.  He was declared deceased at the scene by SFD Medics. The victim was 52-years old. (1:00 AM)

SPD Officers were dispatched to the area to find no one injured but property damage from multiple shots fired.  Police took two guns off the street along with multiple spent casings. Suspects fled in a stolen car.  This is located in the Rainier Valley area.

25-year old male, roommate to the victim called 9-1-1 to report a female down at the bottom of a staircase in their shared West Seattle home located.  Officers were suspicious and turned the case over to Homicide Detectives. The victim died on January 13, 2020. Initially, they interviewed him but released the person-of-interest. However, after further evidence, they charged him with murder on January 22, 2020.  He was booked into the King County jail.

Witnesses began flooding 9-1-1 with multiple calls of a person down on the ground after reports of shots were reported just before 11:00 PM.  Officers arrived within minutes to find a 35-year old man with a single gunshot wound to the leg.  Arriving patrols applied a tourniquet to the wound and called for Medics.  The patient was transported to HMC with non-life threatening injuries. Detectives were busy investigating the shooting case the following day on January 3, 2020.

Police responded to a shooting in the Pioneer Square area to find a victim that had been shot, who was transported to Harborview Medical Center but succumed to his fatal injuries.  The suspect was located immediately and arrested SPD bike Officers, booked into King County Jail.

If you have any tips to some of these unsolved shooting cases, please contact the Seattle Police Homicide Detectives at 206-233-5000.