VCFD Firefighters are on the scene of a 2-alarm residential structure fire located in the 2000 block of Riverbirch Drive in Simi Valley, California, which broke out this evening.

Due to an impending partial roof collapse, firefighters are in a defensive fire strategy. A collapse zone has been established.

High winds are now making conditions challenging and dangerous, but are starting to make progress. Multiple hose lines were laid to protect exposure buildings on all sides of the fire building.

All occupants have been evacuated from the structure and are all okay.

About the Fire Building

ABOUT THE FIRE BUILDING

The fire building is described as owned by Natmi LPF Core LLC and built in 2007. The building serves as the purpose as a warehouse and is said to be approxiately 51,250-square feet on a 557,309 lot size. It is constructed out of masonary, per the King County Tax Records. It is said to be valued at $15 Million Dollars.

The fire was located at the SPAN ALASKA TRANSPORTATION, a LTL (less than truckload) freight carrier that delivers to the lower 48 and Alaska, according to its website.

First Due units arrived reported seeing a large smoke column on the midspan of the roof. Firefighters were then tasked with pulling a 2.5″ on the alpha in the initial stages but throughout the incident would pull up to three lines.

Battalion assumed Command and drove around the building to complete a 360* view.

At 1839 hours PT, Command struck a second alarm request but would request units to stage two-blocks away from the Command Post. Firefighters checked to see what was on fire and for extensions. The fire itself was possibly being fueled by gas.

About 25 minutes, the gas was shut off and water on the fire. There was no heat or smoke on the inside; or visible extension found on the interior of the building.

A primary was completed on the first one-half of the building but could not finish due to members on the top of the roof. Also, this was stated is a warehouse with high piles of storage making it difficult for firefighters to search completely. It was reported that all employees safely evacuated from the structure.

A general safety broadcast was made during the incident that this is a high piles storage facility and there are pallets under the fire area, which appeared to be leaning and all members needed to be aware and careful. An exterior search was tasked instead of interior at the time-being.

Resources were still working on the fire ground when the incident timer showed 73 minutes at 1934 hours. Due to the extent of this fire and the large structure it was in, would imagine they will remain on-scene for quite some time. Unknown if they will be foaming it down and/or conducting fire watch throughout the night.

While this fire was ongoing, Dispatch notified Command of possible smoke related incidents from their fire but they were too far away to be connected. A brush fire and smoke investigation call were dispatched as separate calls.

The building manager is on-scene.

Firefighters with A317 did a complete 360* walkaround and found no smoke, heat and no visible extensions visible.

Another stick was provided in the area to help with getting water on the fire. Two exterior doors on the Charlie side were opened and stated there was a high piles storage close to the door. It was difficult for crews to search the second half of this division but would later be able to complete their primary search and finding nothing.

They were tasked with water supply on the Charlie side, cutting a 60 x 60 hole around the fire area and checking for extensions in the initial fire attack. They forewarned Command and other crews that may be working in Interior Operations of possible panels dropping from down below. Thankfully, there were no crews on the inside of the structure.

The fire was knocked down at 1905 hours PT and reported they were checking for extensions in the attic. It was finally tapped at 1921 hours PT but crews found there was still smoke in the air on the interior but no heat or flames.

Engine companies 333 and 373 were busy conducting primary on the interior.

Medic 6 was tasked with Firefighter Safety and REHAB 303 as Supervisor. No firefighter or civilian injuries were reported or heard over scanner feed during the incident.

Medic 7 was released from the incident at 1902 hours PT and returned back to quarters.

To check out our play-by-play on this incident, see our Tweets on our page @nwfireblog

White Center, Washington | Southend Fire assets and equipment were dispatched to a 2-Alarm Commercial structure fire on Wednesday, July 8, 2020, just before five o’clock in the morning. 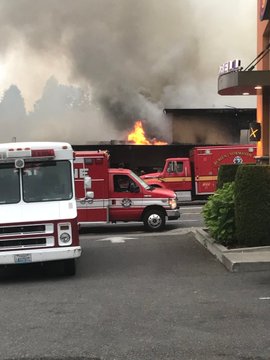 Units were quickly on-scene. Agencies were from the Puget Sound, Tukwila, Burien, Tukwila and Skyway Fire Departments, as well as the North Highline and King County Fire Districts. 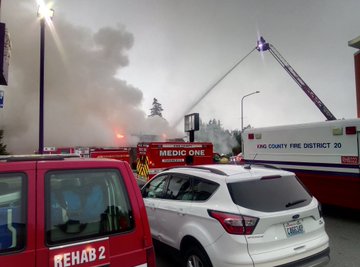 Crews brought in aerials and specialized equipment working to put out the stubborn and fierce fire.

The structure was verified to be vacant building once housing a former funeral home.

As it continued to burn in the area, roadway closures began impacting the White Center community streets, one block out from 16th Avenue S.W. to S.W. 107th Streets.  This would be a normal process as multiple lines would be laid on the streets and up connected to hydrants.  This is to avoid drivers or those from damaging or destroying fire hoses.

No reports of firefighter injuries were reported.

The cause of the fire is unknown and is under investigation.