SEATTLE, Wash. – On Tuesday, June 26, 2018, Firefighters were dispatched to a fully engulfed scrapped car barge fire moored at the Seattle and Iron Metal Corp. dock. The commercial fire was located in the 600 block of South Myrtle Street in the Georgetown area.

The following Seattle fire resources were dispatched immediately, which they quickly engaged the fire.

Seattle SPU arrived to the fire scene with their main focus on assessing the Duwamish River.

The Department of Ecology stated they observed no oil sheen and did not observe distressed wildlife on the Duwamish River on Wednesday morning, June 27, 2018.  They did say there was a small amount of firefighting foam at the tide line.  The barge is boomed as a precaution. 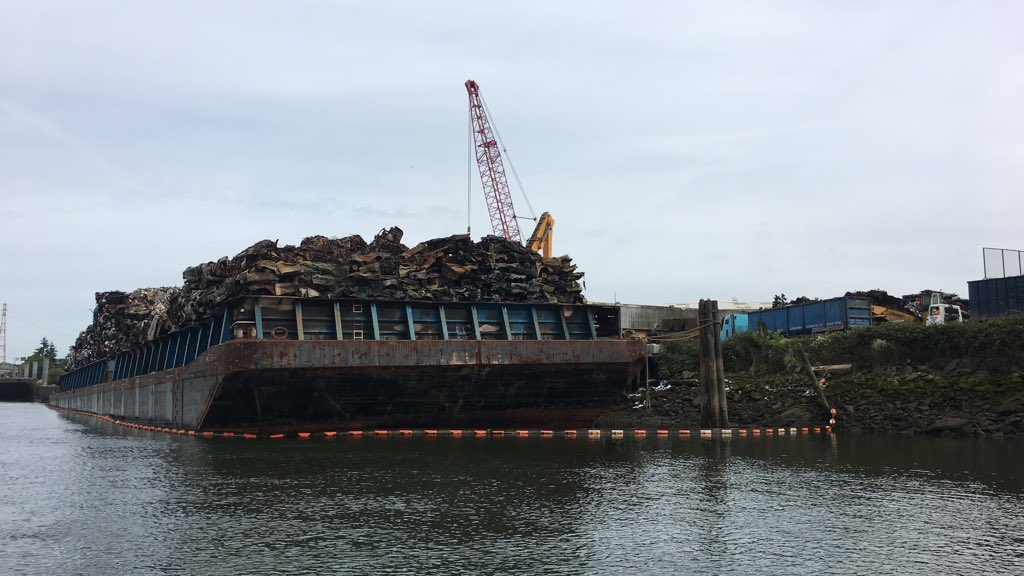 Fire Investigators have ruled the cause as accidental and with damages at $1,000,000.

Two firefighters were reported to have been injured after suffering minor injuries and were treated at a nearby unnamed (most likely Harborview Medical Center) hospital.

Photos portrayed a huge black smoke column seen from areas such as Capitol Hill, West Seattle, South Seattle, seen on 1st Avenue South bridge, from north of the Seattle Boeing plant, Seatac Airport, Magnolia and by others on the outskirts of this large City.

“If you are seeing smoke to the East (via from West Seattle).  It is a barge on fire with metal and propane on the Duwamish River.”

“Seattle Fire Department says the fire is mostly out and that they train for these types of large fire incidents.” – SFD Presser

“We are aware of the large barge fire. We are monitoring the situation and will respond as needed.” – USCG Pacific Northwest

Want more great photos?  Check out David Sonsteng, Photographer and Owner of DJ Sonsteng Photography on his Facebook Page @djsonstengphotography or on Instagram at @d.j.sonsteng.photography.