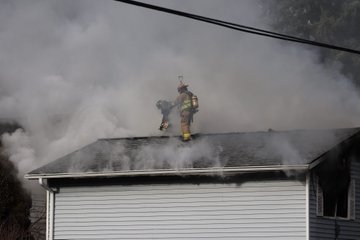 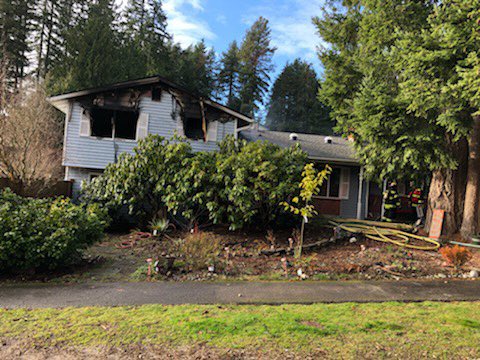 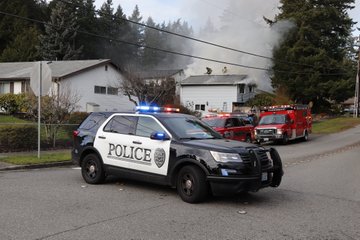 South County Firefighters were dispatched to a multi-story house fire in the 5600 block of 169th Place SE in Lynnwood, Washington in the early afternoon on Saturday, January 4, 2020.

A second alarm of fire personnel with additional equipment were immediately dispatched.  Firefighters would quickly knock down the interior fire and work on several hot spots.

A fire broke out in an apartment complex under construction on Wednesday, January 25th around 2136 PST as a first alarm but would the alarm would be quickly elevated all the way up to a 3rd Alarm.

The commercial structure is located on the 19600 block and Scriber Road in Lynnwood, Washington.  Many reports of this being a replacement for a former apartment complex that also burned down.

Police and Fire began demobing around 0010 hours on Thursday morning.

Parts of the building in sections have collapsed, including the chimney in the center of the structure and appears all of the exposure buildings have been saved by firefighters.

Fire units continue to work on large commercial fire in Lynnwood. Police continue to evacuate surrounding areas. People were evacuated by several Community Transit buses to areas nearby.  A nearby church was being used as a shelter.

Firefighters around the area locally from Lynnwood, Shoreline and others along with a Snohomish County strike team were dispatched to this multiple story apartment complex.

Red Cross was on hand to help local residents by staffing a local evacuation shelter at a nearby church located near the Command Post.

Police Officers were tasked with evacuating residents from exposure buildings which took up much of the City’s and Mill Creek Departments.  They provided perimeter security around the building.

Level2 Firefighters helped put tape up to keep drivers from continuing driving through the fire scene, as Police Officers were tied up with assisting with evacuations.

Public Works set-up barriers to keep the public back in a safety zone and to help Fire with scene control.

PSE secured power to the buildings, which others reported power was out in the whole area.

Reports of one firefighter was injured from a fall.  He was said to be alert and talking.  Another source said he will be okay.

A second report of another firefighter being injured but his/her condition was unknown at the time of this fire.

There were several 9-1-1 calls into SNOCOM of reports of those claiming responsibility for starting the fire.  Police are working to investigate those potential leads.

“Massive fire south of me in Lynnwood. Not sure where it’s located, but it’s lighting up the sky.”

” Falling ash is everywhere at the #Lynnwood fire. Flames are definitely lowering.”

“Windows in adjacent buildings exposed to the fire are breaking out due to the heat.”

“Fire can be seen from Brier.”

“This is the new building replacing the former apartments when that structure burned.”

LYNNWOOD, WA (November 25, 2014) – Yesterday, College Place Elementary students received over 50 coats from the Lynnwood Fire Department’s International Association of Fire Fighters (IAFF) Local 1984 to help meet the needs of students during cold weather. Operation Warm is a national Non-Profit that was founded in 2002 with the singular mission to provide new winter coats to impoverished children.

In 2013, 25 IAFF locals from Washington participated in Operation Warm’s initiative – the largest amount of participation of any state. Raising almost $130,000, Washington firefighters distributed coats to over 4,000 local children. One thousand of those coats were funded by the partnership between 99.9 FM KISW “The Rock of Seattle” and the Washington State Council of Fire Fighters (WSCFF). Other monetary support includes $20,000 from the Gary E. Milgard Foundation and $10,000 from the Norcliffe Foundation.

In 2014, 40 WSCFF locals and Fire Departments are participating in Operation Warm. With a year under their belt, Washington locals are increasing their fundraising efforts – planning more events, attending more community gatherings, and reaching out to more businesses. With the continued support from KISW and the Milgard Foundation, Washington leads the way for other participating states. Passionate about the children in their communities, Washington firefighters are dedicated to giving back.

Pictured here are members from the City of Lynnwood Fire’s IAFF Local 1984 – Lynnwood Professional Firefighters, and students and staff from College Place Elementary.

Lynnwood Fire and the IAFF are proud to serve our community needs.

About Lynnwood Fire Department
The Lynnwood Fire Department is committed to a safe and livable community. We safeguard people, property and the environment through education, prevention and emergency response with innovation and compassion. The Department consists of 60 full-time career staff, including: Chief Officers, Captains, Firefighter/EMT’s, Firefighter/Paramedics, Fire Inspectors and civilian staff. The Lynnwood Fire Department staffs two stations 24-hours a day, 365 days a year in 3 rotating 24-hour shifts. 911 responses are made using fire engines, a ladder truck, aid cars and a paramedic unit depending on the nature of the incident. The department responds to over 6,700 alarms annually, 75% of which are emergency medical calls. The services provided by the Fire Department include: fire suppression, emergency medical services (EMS), fire prevention and code enforcement, plan review services, fire and life safety education, hazardous materials and technical rescue response. Per capita, the Lynnwood Fire Department continues to be one of the busiest fire departments in Washington State, responding to approximately 177 incidents per 1,000 residents.