A tornado touched down early in the evening on Saturday, March 28th in Jonesboro, Arkansas, causing significant damage to homes, businesses, a shopping mall and utility infrastructure.

🌪️ CAUGHT ON CAMERA: Watch as a #tornado moved through the #Jonesboro, #Arkansas area moments ago on this @myARDOT traffic camera. #ARwx 🌪️ pic.twitter.com/CTj6BLDAIT

Resources involved in the incident includes Volunteer Fire Departments, along with the Red Cross and the Arkansas Governor’s office.

Operations quickly came together at the helm of the local Jonesboro Police Department, County Sheriffs and State Police in what appears to be Unified Command at the Turtle Creek Mall.  Emergency responders are working diligently to search, rescue and treat injured, as well as addressing potential hazardous conditions out in roadways, highways, homes and structures.

Officials are asking all to stay home where you are safe and healthy. 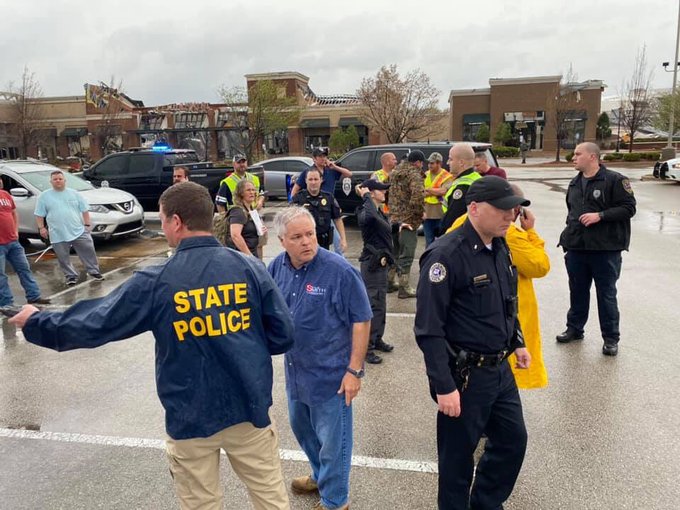 Current Alerts that are in effect currently are:

Citywide curfew has been issued by the Jonesboro Mayor, Harold Perrin for 1900 hours PST. No one should be on the streets.  (Mayor’s Office)

A local meteoroligst says based upon some of the damage, this appears this could be the worst tornado to hit the area since the F3 on April 3, 1984 (36 years ago).

This tornado is said to be at a F4, which ripped through the heart of downtown Jonesboro.

More updates will be posted as information trickles through.  Please be safe, Arkansasians.

Inyo & Mono Counties, California | A wildfire started today at 1407 and was reported to be around 50 acres. It is located west of Highway 395 at the Sherwin Grade. There is a 0% containment.

As of 1830 this evening, CAL FIRE reported the fire had increased to 100 acres in size seriously impacting two towns.

Paradise and Swall Meadows are currently under a mandatory evacuation.  An evacuation shelter has been set-up at 458 S Landing in Crowley Lake, California 93546, the town’s Crowley Lake Community Center.

One outbuilding and one residence are reportedly destroyed.  The cause is currently under investigaton.  No injuries have been reported.

Thirteen [13] fire engines are currently working, along with two [2] dozers.

Road Closures have been set at Roller Rock Creek Road at Toms Place and Gorge Road on Nside of Highway 395.

Conditions are making it difficult for firefighters and fixed wing or rotary aircraft to fly due to erractic shifting winds.

The town of Paradise incorporated in 1979, and is located in the foothills of Northern California’s Sierra Nevada Mountains.  Elevations vary from 2,000-2800 above the Valley floor.  According to the town’s website, they state they have a population of 27,000 residents.  Adding neighboring towns:  Magnolia, Paradines Pines, Lovelock, Stirling City includes another 25,000 residents.

It is known as the 2nd Largest town in Butte County, California.

The town has three Fire Stations: #81 [main station] on Birch Street, #82 on S Libby and #83 on Wagstaff.  There are two [2] fire stations with three-man crews and one [1] fire station with a two-man crew.  The small Fire Department has a Fire Prevention Officer, a Fire Marshall and an Administrative Assistant.

They have an agreement with CAL FIRE that also maintains stations within the town, making it more efficient for operations and quick responses.

Swalls Meadows is located in the Southern area of Mono County and is home to vacationers and families.  This town has a 23% ratio of unoccupied homes in the community with a population of 220 residents [per 2010 census].

There is only a Volunteer Fire Station in the the town.  There are no commercial buildings and this is family oriented community with many surrounding beautiful views.

In all of Seattle’s record books, one of the worst fires ever occurring in their City would go down in history as the most devastating ever suffered.  To this day, the Seattle Great Fire is still talked about.

On June 6, 1886, it was said that a cabinet-making worker, John Back was heating up glue in a pot over a gasoline fire around 2:15 in the afternoon.  Sometime shortly after that around 2:30 p.m., the glue boiled over and caught fire.  The fire quickly spread to the turpetine and wood chips laced floor.

The cabinet-making worker attempted to douse the fire by putting water on it which only made it worse.  People evacuated the building.  No injuries or casualty reports were recorded.

The Fire Department showed up about fifteen minutes later to a smoke-filled building with an unknown location of the fire.  Their first assumption was that the fire originated in the paint shop above the cabinet-making shop.

A Seattle newspaper went to press the next day printing the story.

By the time investigators found the fire, it was too late and the it was completely out of control.

The fire began to destroy area businesses:  Dietz & Mayer Liquor Store, the Crystal Palace Saloon and the Opera House Saloon.  The liquor store exploded first taking with it the two saloons.  It was now fueled by alcohol and quickly spreading to the whole block of Madison to Marion engulfing it in fire.

Volunteer Firefighters attempted to put the fire out but Seattle water at that time was provided by the Spring Hill Water Company, so other alternatives were taken to pump water to the fire scene.  Fire hydrants were on every other block and the pipes were made from hallowed out logs which would later be burned in the fire.  One great sounding option was to take water from Elliott Bay and put on the Commercial mill but the tide was out and the hoses were long enough.  They worked tirelessly to stop the flames from exposure buildings.

Unsure of why this was the case at the time, but it was recorded as crowds of people harassed firefighters while they fought the fire.  Water pressure was also duly noted as being one of the major problems during the fire next to the wind that would come up and help spread the fire to additional buildings.  Now, the Commercial Mill, Colman Building and the Opera House were on fire and this was becoming the out-0f-control fire many feared.

It was reported that Mayor Robert Moran took command from Acting Fire Chief James Murphy who was distraught. The Mayor ordered the Colman building be blown up to stop the fire but it, instead jumped the block burning the wharves heading up hill towards Second Avenue.  It then headed up to Third.

Mutual Aid from within the Northwest

Mutual Aid was called from Tacoma, Portland and Victoria but back in the day, it would take hours to reach the fire riddled Seattle.  Business and residents quickly cleared out their offices and homes as fast as possible, placing their belongings in wagons. The Seattle Times was able to remove their files and records in time on their schooner away from the burning wharves.

The fire reached Third Avenue and immediately took out the Trinity Church torching it. It had arrived at Fourth and University and attempted to burn down the Courthouse and the Jail inside. Inside quick thinking firefighters would come up with property-saving techniques.

The fire burned until 3am the next burning.  After all was said and done, the damage was extensive.  Over 25 blocks or approximately 120 acres, including the Business District, four of the City’s wharves and its railroad terminals would be completely destroyed.

Thousands of people were displaced and over 5,000 men lost their jobs.  The City estimated around $8M in losses not including personal losses and water & electrical losses.  It has been estimated at $20M ($650M in today’s world).

Seattle Will Not Falter – A New Beginning

Seattleites did not wait but rather came together as more than 600 businessmen took part in a recovery and rebuilding project that would enable businesses and people to rebuild their lives.  Over 200 persons were deputized to stop looting that was occurring.

Seattle area businesses and its residents decided not to move out of the City but instead began to rebuild in the same location where their stores once stood.  They, however, did something quite interesting in raising their buildings up 22 feet in an attempt to level out the hilly Seattle.

Many of the Volunteer Firefighters quit immediately after the fire, citing citizens harassing them while firefighting. The City recognized they had a staff shortage crisis on hand, immediately created a professional Fire Department in October 1889.

The Great Fire would change the all-volunteer Fire Department into one of the most sought after Departments to work than any other in the Country.   There have been some devastating fires since the Great Fire but nothing ever comes close to this one.

Researched and Written by: