NOTE:  While we understand some of you are asking on specific fires, we are working to the best of our ability to gain information on each fire.  This is why we have compiled this into a SINGLE post because there are just so many wildfires breaking out.

Several wildfires  have ignited and jumped on to our Fire Map. (Note: The fire map only is showing fires over 300+ acres)  Here is our SitRep for Thursday, August 31, 2017.

Fire behavior has been downgraded to moderate with single-tree torching, backing with uphill runs.

IMT and the Curry County Sheriff’s Office has reduced the area currently under a LEVEL 3 evacuation to a LEVEL 2 starting at the western checkpoint on the North Bank Chetco Road at Da-Tone Rock and East to the North Fork of the Chetco River. This is not including the upper portions of Mountain Drive or Coho Drive.  (See additional areas on this weblink –> https://inciweb.nwcg.gov/incident/article/5385/39353/

26 structures have been lost.

NWIMT 7 ICP is located at Broken Arrow Campground near Diamond Lake.  This complex consists of Paradise Fire, Windy Gap Fire and Pup Fire resources are working out of a fire camp established at Milo Academy. Smaller fires are being managed by a Type 3 organization for the Tiller Ranger District.

Pup Fire. 145 acres. 0% contained. Located in the headwaters of Hershberger Creek near Pup meadow in the Rogue – Umpqua Divide Wilderness. Firefighters have established an anchor point and constructed direct line to contain the fire as it moved out of the wilderness boundary. Water drops have been used to keep the fire from spreading to the NE and East.

Active fire behavior with short-crown runs and group torching. Structures are being threatened.

Nash Fire.  Significant fire growth has occurred over the last few days. Fire crews are working to construct and clean indirect control lines by hand as well as with dozers. Continued structure assessments and protection to be done.

Working to secure the fire’s edge on the Scorpion Fire

Approximately 30-acre fire moving North. Firefighters are waiting to enter the area when it is safe to use fire suppression tactics.

2 structures have been lost.

INDIAN CREEK FIRE. (OR)  20 miles WSW of Hood River in the Hatfield Wilderness

Fire behavior is moderate with smoldering, creeping, flanking and creeping. 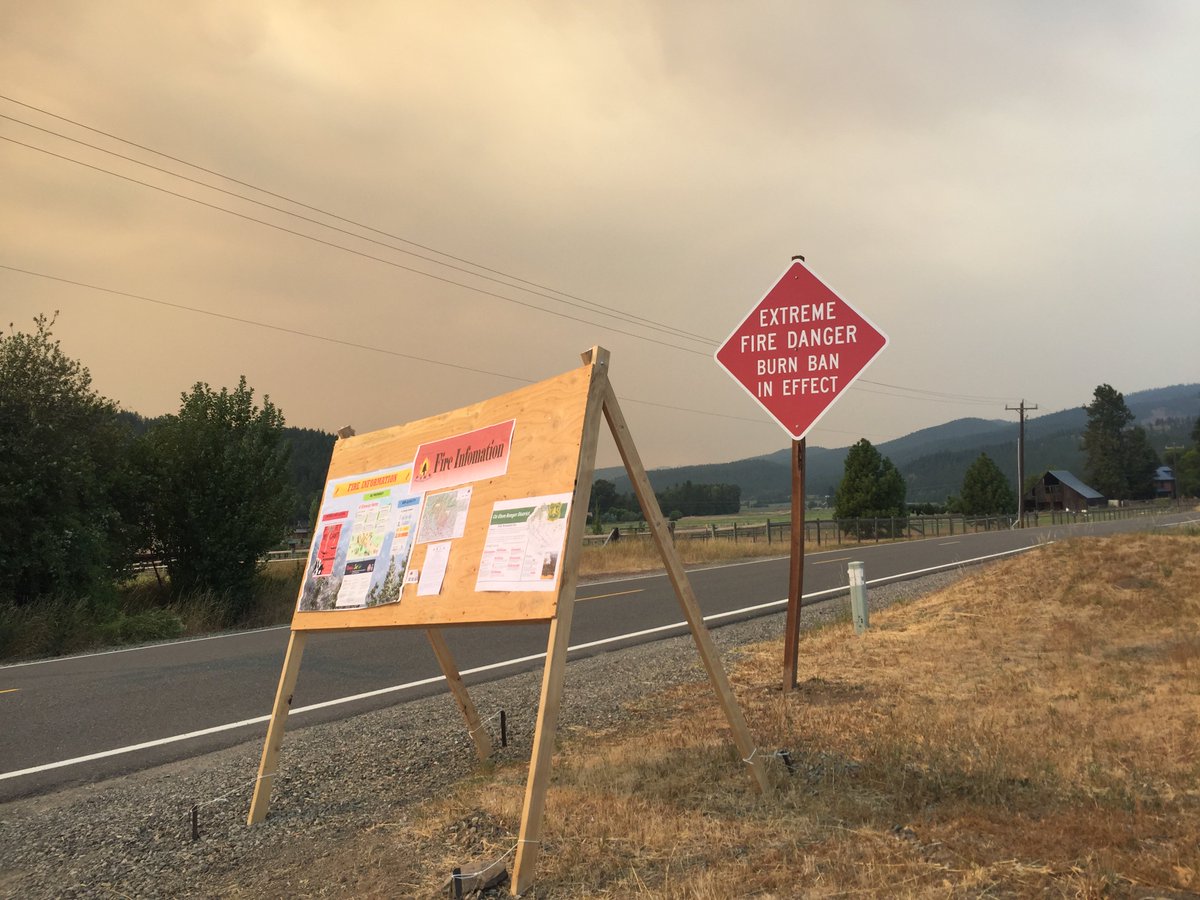 Fire Info and a Warning. You don’t ever see these Red signage unless you are in a fire zone. (Credit: DNR)

Extreme fire behavior shows itself in this firestorm image on the Jolly Mtn Fire.

1 structure has been lost.

Burnout operations on the Milli Fire

Large amounts of smoke billow out of the mountainside. (Credit: PCT hiker)

View from US 20 on the new Potato HIll Fire.

20 and South of the Lost Lake Camground. Reported 8/29/2017. Heavy logging slash and timber (litter and understory).

1 structure has been lost.