POST SUMMARY | Wildfires seem to be popping up all over our landscapes here in Washington and Oregon without permission of course, but we must fight them however we can.  Here is how firefighters are doing just that and more.

We are currently tracking almost NW 30 wildfires on a daily basis, while working to bring you Fire Info on additional fires (CA wildfires on The CA Fire Report). Here is our recap for  10+ Washington State wildfires for Wednesday, September 6, 2017.

Note:  Fires shown on this map are only for those 350+ acres.

Fire is being monitored to make sure it remains confined to the wilderness.  Fire crossed over the Kettle Creek to the East. No further details on this fire due to heavy smoke and limited visibility.

There are currently no other resources or personnel assigned to this fire at this time.

Briefing on the Bridge Creek Fire.

Fire has been knocked down to a moderate fire behavior with smoldering, creeping and isolated torching. Some resources are being demobilizing from this fire, as fewer resources are needed at this time.

The Mount Tolman Fire Center has set the Fire Danger Level at “Very High” across the Colville Reservation.

Remaining fire personnel will focus on much of the heat of the fire located along the NE perimeter and interior in Division G. They will also work to establish a solid mop-up line 100 feet from the fire’s edge.  This is where the greatest number of personnel are assigned.

Putting the water on the red stuff.

Other firefighters will continue to utilize the infrared camera along the SW perimeter.  There are only three areas where heat has been observed.

27 miles NNW of Winthrop on the Pasayten Wilderness. Start 7/23/2017 around 0945 hours. Cause has been solved and determined to be human intervention.  Law Enforcement Officials have not released the cause to the Public.

A Washington Smoke Blog, which data is gathered from County, State and Federal Agencies along with Indian Tribes and posted to this map by volunteers show the massive amounts of smoke pouring into the lowlands all across the NW.  http://wasmoke.blogspot.com/

The Diamond Creek Fire crossed over the Canadian border on 8/29/2017.

Extreme fire behavior with short-crown runs, group torching and spotting is occurring.  Heavy smoke appears as the inversion continues, now into multiple days enabling the fire  to be stuck in rocky terrain just over Butte Pass at the head of Monument Creek.    Majority of the fire continues to move NW into Canada.

Today is the 88th consecutive day without rain over much of the North Central Washington State area. Much of the same weather will continue mid-week.

12 miles West of Trout Lake was reported on  9/3/2017, as burning in the Indian Heaven wilderness on the Gifford Pinchot NF.   Unknown cause but is under investigation. Fire currently unstaffed and with no resources assigned to this wildfire.

Fire reported in the Indian Heaven Wilderness on the Gifford Pinchot NF on Saturday.  The Pacific Crest Trail or PCT  as known to hikers were evacuated and other trails.

The Indian Heaven Wilderness and approximately 10 miles of the Pacific Crest Trail or the PCT are closed at this time.

All trails including the Indian Heaven Wilderness and West to the 65 Road and 30 Road extending North to the 30 Road intersection with Road 24 are closed.

Additional closures on the Southern border at Indian Heave wilderness and the 60 road along with the PCT between FS Road 60 near Crest Horse Camp north to Surprise Lakes.

NE winds will pull wildfire smoke into the area from the State of Montana and our nearby neighbor, British Columbia, Canada.  This will reduce visibility, which is currently impacting aircraft recon and infrared flights.

A recon flight shows the magnitude on the Jack Creek Fire on 9/2/2017.

Moderate fire behavior with backing, flanking and isolated tree torching.  Firefighters have spotted fire over Jack Ridge and has been established in the Eightmile drainage prompting immediate evacuation of campers and day hikers closing off all trails in the area.

Fire grew to the South in the Van Epps drainage and grew largely east through the 2008 Jack Creek fire footprint.  It currently has a moderate fire behavior with surface fire, single-tree and group tree torching.

Fire Managers are allowing the fire to burn its natural course for ecological benefits.

The Washington State National Guard was activated on 9/6/2017 at the request of the Kittitas County EOC to assist with road blocks, traffic control and firefighting efforts.

WNG personnel will work directly under EOC Command for Law Enforcement support while firefighting resources work for the PNW 2 Type 1 IMT.  They were also requested back in 2014 for the Snag Canyon Fire.

PNW  Team 2, a Type 1 IMT.  775 total personnel. 16 crews, 9 helicopters and 78 engines. Fire is in State Mobe status, which activates many resources at the Local, County and State levels bringing out those statewide. 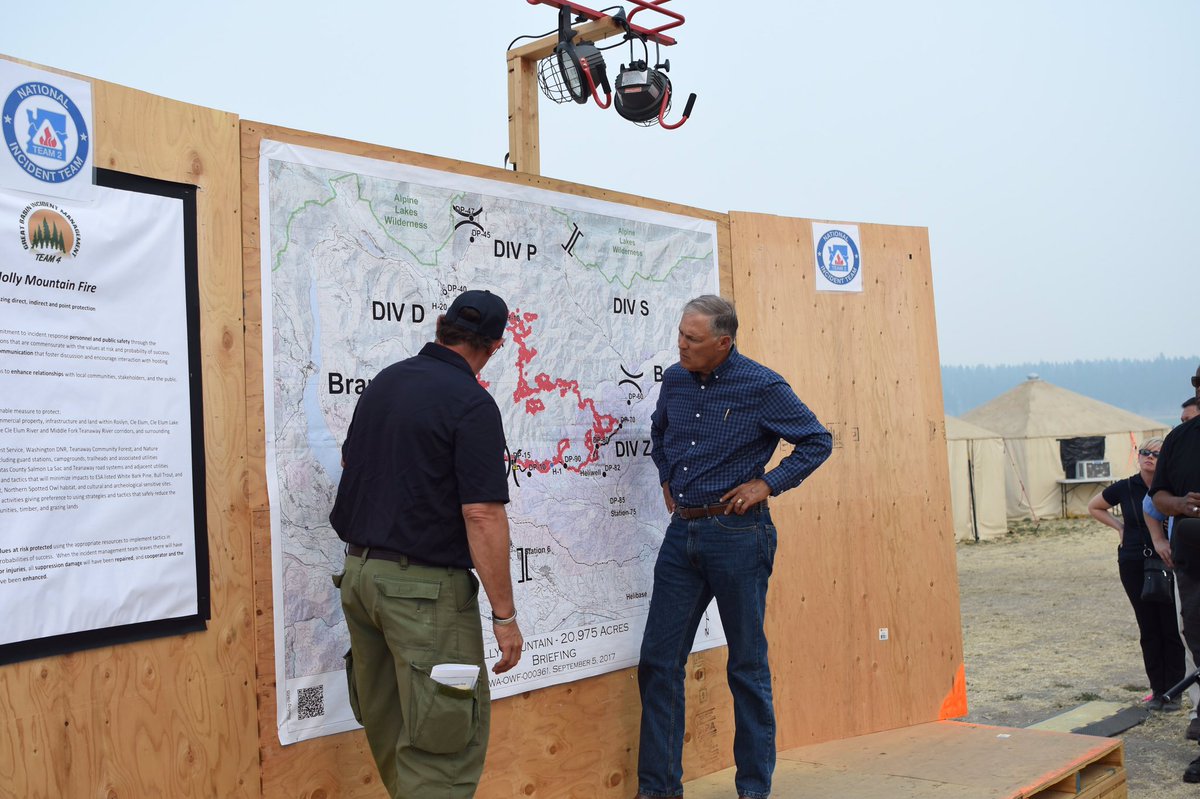 Jolly Mtn Fire ICP briefing Governor Inslee on 9/5/2017. You can see how massive the fire is in the middle of the map. Credit: Gov. Inslee Office

On 9/2/2017, Washington State Gov. Jay Inslee declared a State-Of-Emergency due to wildfires across the State.  This activated the National Guard, the EOC and  local and state firefighting resources.

There are 775 personnel, 19 crews, 78 engines and 9 helicopters assigned to this incident.

The infrared camera used shows a substantial increase in acreage for both the NORSE PEAK FIRE and AMERICAN FIREs.

NORSE PEAK FIRE crossed over the PCT on Monday and entered the Crystal Mountain ski area.

Fire personnel will continue to complete work along SR 410 to the SSE.  The fire on the Western edge continues to threaten structures and crews are working on suppression and containment.

Enumclaw residents are not due to evacuate as the fire is about 30 miles away from them. Enumclaw FD has put out a Presser that they are not expecting the fire to move towards town. They are monitoring the fire situation very closely.

Due to rugged landscapes, the fire cannot be contained but only listed as under “control”.

75 personnel. 2 crews and 5 engines.  Lead Agency is WA DNR. IC is a Type 3, SE WA IMT Team 1.  Type 3 resources have been ordered and will be soon arriving to the fire line.

16 miles NE of Manson and burning on the steep slopes of the east shore of Lake Chelan on USFS managed lands. Start 8/30/2017.  Cause unknown.