UNITED STATES – There have been so many wildfires burning during this crazy and most expected Fire Season but we know if we capture them one-by-one for each wildfire, we would probably cause your Social Media pages to implode, so we are doing a Wildfire Recap of  all current and active fires from several acres to thousands of them.

#GOESEast captured the #wildfires currently burning in southwest #Colorado. The #416Fire near Durango has grown to over 19,000 acres and forced more than 2,000 homes to evacuate. More satellite imagery: https://t.co/P1F11zXUHI pic.twitter.com/UsEwyWsTdp

The 416 Fire is located in the San Juan National Forest, about 13 miles north of Durango in timber and brush.  Active fire behavior is present with group torching, single-tree torching and spotting.  Structures are under direct threat, while evacuations, road, area and trail closures remain in effect.  22,131 acres. 10% containment. Fire was said to be growing largely to the west. 813 personnel. 18 crews. 47 engines. 8 helicopters. $6.6M CTD. #416Fire

The Apple Fire also burning in the same unit as the CHROME FIRE is burning 5 miles northeast of Flournoy in brush and tall grass.  It too, has a minimal fire behavior showing. 2,956 acres. 90% containment. 28 personnel. 7 engines and 9 structure lost. $141K CTD. #AppleFire

Bocco Fire is a new fire in the last 24 hours that is burning in the district of the Colorado River Valley Field Office on BLM lands about 3 miles northwest of Wolcott in chaparral and short grass.  Moderate fire behavior is present with flanking, backing and creeping.  Structures and sage-grouse habitat is being threatened.  415 acres. 20% contained. 148 personnel. 5 crews. 7 engines. 2 helicopters. $450K CTD. #BoccoFire

The Eagle Canyon Fire is burning in the southeast area of the Oklahoma DOF’s lands, about 9 miles east of Cloudy in timber.  There is extreme fire  behavior that is running. 300 acres. 50% containment.  16 personnel. 7 engines. $18K CTD. #EagleCanyonFire

The Molybdenum Mountain Fire is burning in the SW Area Forestry in the AK DOF area that started on BLM land, 18 miles north of Chuathbaluk.  It is burning in timber and short grass.  Minimal fire behavior has been observed.  650 acres. 60% contained. 27 personnel.  1 crew. 1 helicopter. $210K CTD. #MolybdenumMountainFire

This wildfire ignited in the last 24 hours in the Oklahoma Department of Forestry’s area, about 2 miles south of Kenton. Brush and short grass are this fire’s fuels which is burning up the lands.  Extreme fire behavior with running and short-range spotting is present.  Homes are threatened.  5,000 acres. 10% contained.  61 personnel.  15 engines. $132K CTD. #PorterFire

The Rim Fire is burning in the area of Upper Snake Field Office and Bureau of Reclamation, about 10 miles southwest of American Falls in brush and tall grass.  Fire behavior is moderate with creeping. Structures are being threatened. 873 acres. 60% contained. 44 personnel. 1 crew. 3 engines. $50K CTD.  #RimFire 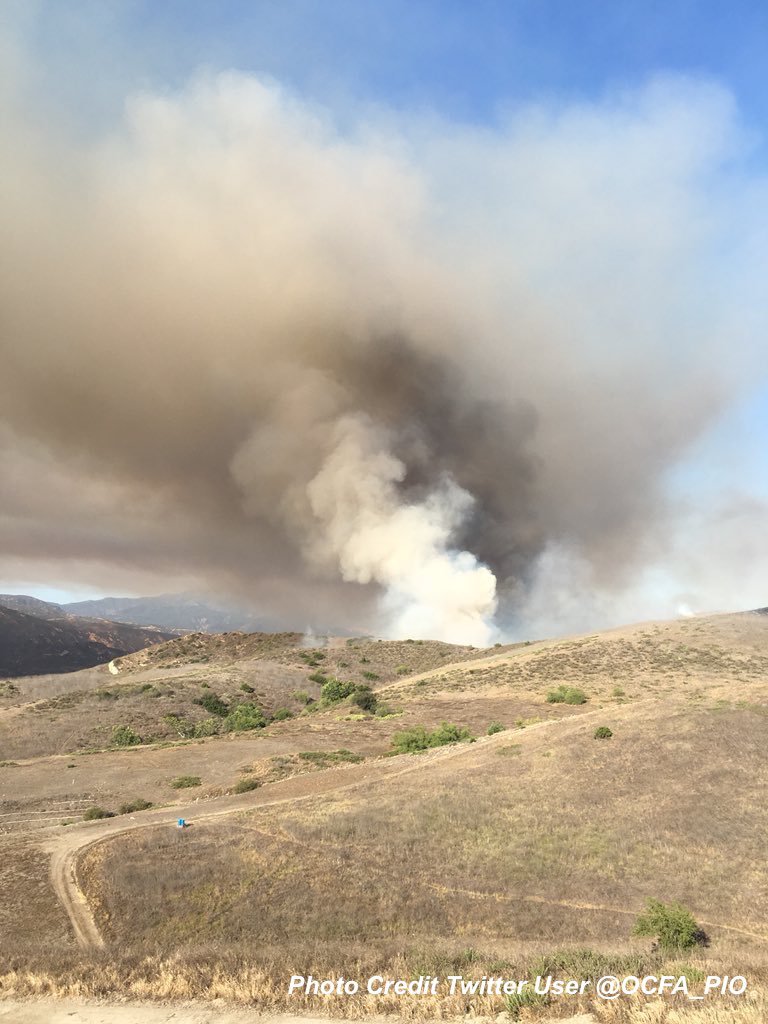 This wildfire is burning in the Ocean County (OCFA Fire District) off of Highway 241 and Santiago Canyon Road.  The fire started around 1615 hours on June 11, 2018. 1 minor injury to a Firefighter.  Firefighters will remain on the fire ground until the end of the night.  Forward rate of spread has been stopped at 1930 hours. 155 acres. 10% containment. #SantiagoFire

This Complex is made up of 3 fires which started on private land about 15 miles north of Ft. Davis in timber, brush and tall grass. Minimal fire behavior. Rain occurred over the fire on Sunday. 26,042 acres. 80% contained. 272 personnel. 4 crews. 50 engines. 5 helicopters. $1.2M CTD. #ScenicLoopComplexFires

UPDATE 2025 hours | Dispatched just called out a 4-alarm fire and for all resources to respond.

The South Fire is burning in Los Angeles County, about 5 miles southwest of Santa Clarita where several fires have broken out. This fire is burning in chaparral, brush and tall grass with it currently being at a minimal fire behavior occurring. 175 acres. 92% containment.  312 personnel. 8 crews. 25 engines. $825K CTD. #SouthFire

Willow Creek Fire ignited within the last 24 hours in the Uinta/Wasatch-Cache National Forest, located about 20 miles southeast of Heber.  Active fire behavior with wind-driven runs, group torching and spotting has been reported. Road, area and trail closures are in effect.  Fire is being managed with a strategy other than fire suppression without a type 1 or type 2 IMT assigned.  453 acres. 10% containment.  86 personnel. 2 crews. 3 engines. 1 helicopters. $50K CTD. #WillowCreekFire

We will provide updates as we receive them. Thank you for reading our Blog and be sure to follow us on our Social Media pages here: