The KINCADE FIRE ignited on October 23, 2019, at 2127  hours PDT from an unknown cause. Fire investigators are currently reviewing information to determine the cause and will be under investigation until further notice.

Significant  Event | Authorities have now ordered the largest mass evacuation in Sonoma Country history, stretching from the 101 to the Pacific Ocean. (Media)

The fire is located in steep terrain and in remote areas, where it was sparked on John Kincade Road and Burned Mountain Road, which is northeast of Geyersville, California.

A RED FLAG WARNING was issued on Saturday evening and in effect as of 2000 hours PDT due to strong offshore winds and low humidity, a cause for critical fire weather conditions.

Significant Event | PG&E to shutoff power for 1 Million of its Northern CAL customers, making it the largest shutdown in history. (Media)

Significant Event | Fire is now spotting one mile ahead. (Media at 0205 hours) 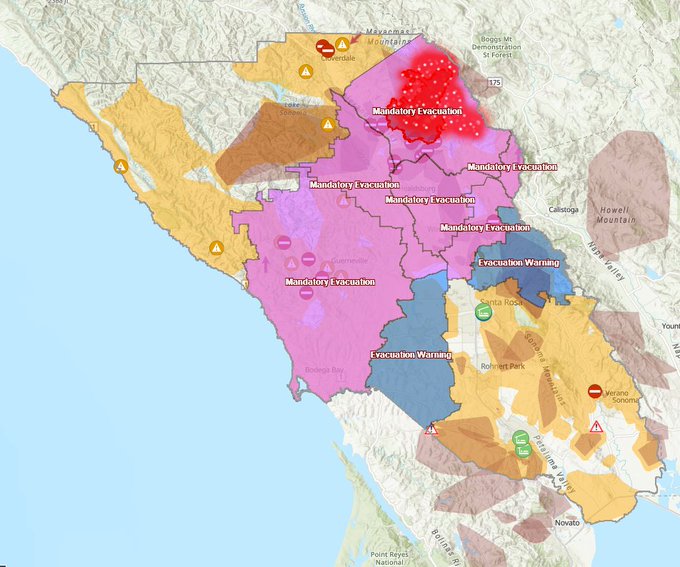 PG&E has begun to shutoff power in most of Sonoma County. A prolonged outage may reduce our ability to warn you in the event of an emergency. This is an Evacuation Order, evacuate now. .  Link —> socoemergency.org (Sonoma County Sheriff)

“It has gone from completely calm to intermittently howling in downtown Santa Rosa in a very short time.” (Twitter user at 0205 hours PDT)

“Concern about fire potentially jumping Hwy 128 near the Alexander Valley School. Now have spotting approx 1 mile ahead of the main fire.” (CA Fire Scanner at 0200 hours)

“Radar echoes once again showing up northeast of Healdsburg as strong winds reach the fire area(s).” (Weather Forecaster at 0200 hours)

“Any other trucks and resources are going to be heading to Alexander Valley Elementary School. It’s a small school, located across from the iconic Alexander Valley Vineyards, one of the most beloved family owned wineries in the region.” (Media)

“A massive mutual aid response has arrived (and continue to pour in).” (Media)

“Some serious stuff is about to go down on that mountain tonight. Crews getting into place. Strike teams set up. 150 trucks rallying in Healdsburg. National Guard is here.” (Media)

“A6WA reporting 80-90mph wind gusts from the north w/ activity increasing @ the heel of the fire (northern side). Not so much movement on the head yet but anticipating it in the next hour.” (CA Fire Scanner) reported at 0130 hours PDT

“Units reporting structural impact in the next ~30 mins in the 8000blk of Hwy 128 near Pine Flat Rd & the Alexander Valley Elementary School.” (CA Fire Scanner) reported at 0124 hours PDT

“Branch 1 reports the fire is exhibiting extreme-erratic fire behavior, strong winds pushing the fire, the fire pushed past all control lines & backfiring operations. “We are going to let it do what it wants for a little while” Firefighter safety now top priority.” (Media)

“The amount of mutual aid streaming up highway 101 towards Sonoma County towards the fire is something to behold.” (Media)

“With 60mph winds, “it doesn’t matter what equipment we have on. It has the potential to overwhelm us.” If you stay, responders will have to put THEMSELVES in danger to save you. DON’T DO THIS. Get out. It’s not just you, it’s also firefighters.” (Point Richmond CERT on 10/26/2019 at 1848 hours PDT)

“2.7 million people could lose power in Northern California as utility PG&E cuts service to prevent the spread of wildfires. 50,000 people have been ordered to flee.” (NY Times)

“Long lines at gas station in Sebastopol. Highway 101 southbound in Santa Rosa is crowded like rush hour traffic.” (Twitter user on 10/26/2019 after noon)

” As your evacuate try to do this:  Scan or snap photos of your homeowners/renters insurance policy. Make sure you get the page that tells you who to contact & how. Send the images to the cloud to be safe.” (Twitter user on insurance)

“I am so worried about the firefighters tonight. A guy I’ve literally known my whole life is out there. His own home is one of many in the evacuation zone.” (Twitter User)

“I cannot express the words of being in these fires again two years later.” (Twitter User)