Tragedy struck at the Mary Pang warehouse incident  that  occurred on January 5, 1995, an arson-caused fire – that was deemed to be a well-played out plan by the owner’s son for insurance money.  He had hoped that  if it burned down, he would reap a large payout.

As it turned out, many people and Officials were aware of this planned attack on a Seattle business but the day to carry out the arsonist’s intentions came and went.  Soon afterwards after the intended date, the fire eventually took place and the intensity was well publicized.  It was also the day, the arsonist murdered four great Seattle Firemen and destroying hundreds of lives and those who were deeply impacted by their losses to their immediate families, Fire Department, fellow Fire Brothers and Sisters, communities and those indirectly.

I wrote a short story, Seattle Mourn from the viewpoint of a fictious reporter but based upon actual Fire Investigative reports, media news and publications, eyewitness accounts and listening to audio coverage as the fire incident unfolded on that horrendous day.  As a former Firefighter REHAB volunteer, I can only imagine the intensity, the smells, the sounds and the large number of Fire personnel arriving on scene.  This story was inspired by these amazing men – Lt. Walter Kilgore, Lt. Gregory Shoemaker, Firefighters James Brown and Randall Terlicker who lost their lives on this tragic day and published in an anthology, Felons, Flames and Ambulance Rides released July 2013.

Their lives will be forever remembered and what they stood for.  Please take a little moment and say a prayer remembering those who are still greatly affected by their loss by their families, friends, Fire brothers and sisters.  We Will Never Forget.

Seattle, Washington | On January 5, 1995, an arson fire claimed the lives of four Seattle Firefighters, Lt. Walter Kilgore, Lt. Greg Shoemaker, Firefighters James Brown and Randy Terlicker in what would be one of the worst fires in history.

WE WILL NEVER FORGET, is a tribute to all those in Public Safety who have died in the Line of Duty remembering their Legacy, Commitment, Dedication and Service.  Though GONE BUT NOT FORGOTTEN is a way we remember who they were here on Earth.  Their memory still lives on in our hearts and souls.

This year marks the 20th Year Anniversary of their Lives Lost and remembrance of these four Heroes will be celebrated on Monday, January 5th in Occidental Park at 0900 Hours.  This is also the same place where four statues were created in their Memory and dedicated all the men and women whom have died in the Line of Duty.

The Seattle’s Bravest Charity and The Walter Kilgore Honor Guard was created from these tragedies and are dedicated to their Memory.

All are Invited to Support your Fire Service Community, their Families and remembering their Lives.

[ As a tribue to these 4 Seattle Heroic Firefighters, Author LR Swenson wrote a short story, Seattle Mourn published in the anthology Felons, Flames and Ambulance Rides released by Oak Tree Press in July 2013 and can be ordered through Amazon.com ]

New Britain, CT | NBFD Deputy Fire Chief David Fiori, 59, fell ill while on shift at approximately 2200 on Sunday, May 25, 2014.  Firefighters gave him medical care and transported him to the Hospital of Central Connecticut.

He was a 36-year veteran of the Fire Department.  He was promoted to Deputy Fire Chief in 1992.

Additonal information, details can be found on his Obituary and Condolences to the Family Page.  http://www.legacy.com/obituaries/hartfordcourant/obituary.aspx?n=david-p-fiori&pid=171148249&fhid=4099

To light a candle or send a condolescene, please visit them at http://www.farrellfuneralhome.com.

WE WILL NEVER FORGET.

Fresno, CA | Two CHP Officers enroute to a pre-dawn MVA were killed while responding to the accident scene, when they swerved from hitting one of the involved drivers.

The RP stated the accident was in the NB lanes.  The Officers had to travel SB to get to the other side of the Highway.  They may have realized that the accident scene was on the SB side.

It is suspected that the male driver in the truck had fallen asleep at the wheel which caused it to hit the center divider spinning around facing NB in the SB lanes with his lights off.

This quickly became a multiple car pileup, causing dangers for responding Officers and for injured drivers.

It is being said that when CHP Officers Brian Law and Juan Gonzalez approached the scene, they saw a man standing in the middle of the Highway.  Swerving to miss him caused them to lose control of their patrol car hitting the barrier then a pylon sign.

Both Officers were killed.

Officer Brian Law transferred to Fresno one year ago from starting his career in Oakland, so he could be closer to his wife and three kids.

Officer Juan Gonzalez had transferred from CHP San Jose in 2010.  He is survived by his mother, sister and girlfriend.

“WE WILL NEVER FORGET: A Tribute to Our Fallen Heroes.  We will always remember your Legacy, Dedication and Love for the Job, as well as your Tireless Efforts to Protect and Serve.

We are so sorry for your Loss and send our sincere sympathies to the Officers’ Families, CHP Fellow Officers, Friends and, to the Community they Served.”  -NWFB

Scottsbluff, NE |  A 24-year old Nebraska Corrections Officer was reportedly killed by a 15-year old inmate when he attacked the Officer while he was in isolation.

“We are deeply saddened by this incident.  We offer our sincere sympathies to Officer Baker’s son and family, her fellow Officers and to the Community she lived in.” – The NW Fire Blog

For the full story, go to PoliceOne.com.

Dallas, TX | A Dallas Firefighter was fatally injured when he fell from a Southern Dallas icy overpass on to the pavement below, while working at the scene of a MVA.  Media sources say, possibly he may have been struck by a vehicle at the intersection of I-20 and Spur 408, but details are still sketchy.

News sources are also stating that the Dallas-Fire Department is confirming the death of one of their own, a 14-year veteran, Firefighter William Tanksley.  He leaves behind his wife and three children.

Fellow firefighters had a difficult time reach him because of icy conditions but were able to rescue him from the scene, transporting him to the hospital.  He passed away from his injuries.

“We offer our sincere sympathies and are truly sorry for your Loss of Firefighter Tanksley.  Our Thoughts are with his Wife & Children, Fellow Brothers & Sisters, Friends and His Community.  WE WILL NEVER FORGET his Legacy left behind, his Heroic measures given and for serving his Community when they needed him most.”

Toledo, OH |  Firefighters were dispatched to a six-unit apartment fire on January 26, 2014, near Tolendo around 1530 hours.  Two members, Stephen A. Machicinski and James A. Dickman were killed in the line of duty.

As they were battling the blaze, they became disoriented and suffering injuries inside the building.  Firefighters rescued their Brothers from the apartment complex, beginning life-saving measures. Both were transported to the Hospital.  They did not survive.

WE WILL NEVER FORGET is a Tribute to Firefighters that have died in the Line of Duty.  Their Legacy and Memories will Forever Live On remembering their commitment, dedication and who these great Heroes Are.

Today, is a day of Remembrance of how four Seattle Firefighters lived and not the way they died.  For those of us here in Seattle, we have relived that memory over and over again since that fateful day on January 5, 1995 occurred.

Knowing the history behind this arson-related fire, it is still hard to fathom and how this devastating fire could have occurred in such a large City as Seattle.  Since, that tragic day, many things have improved for the better with increasing Firefighter Safety, Pre-Fire plans, on scene fire communications, better tools of the trade and Staffing changes.

The Seattle’s Bravest Charity was created in March 1995, after the Pang Warehouse fire as a way to raise money to care for the Fallen Firefighters families.  The community’s outpouring of love and support helped raise $500,000.  The organization has since grown helping with many broad scopes of causes, i.e. helpinig victims homeless by fire, donated hundreds of bike helmets to needy children, contributed to large scale disasters and has raised money to build the Fallen Firefighter Memorial in Pioneer Square. This Memorial lists the names of Fallen Firefighters.   The Charity also supports the Walter Kilgore Honor Guard.

WE WILL NEVER FORGET, is a tribute to “all” Firefighters who have died in the Line of Duty.

This evening, Firefighters from various agencies and those who wish to attend the Memorial, will be gathering together to remember the Fallen 4, Lt. Walter Kilgore, Lt. Greg Shoemaker and Firefighters James Brown and Randy Terlicker.

Waycross, GA – Two suspects both 17 and 23 were charged with arson and murder for the death of Waycross Fire Lt. Jeffrey Little, media sources say. 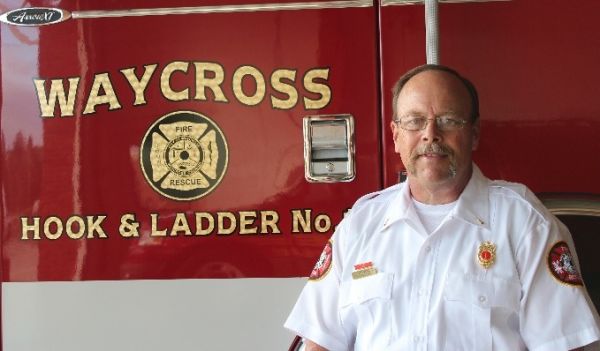 The ceiling of a floor above him collapsed on him and another firefighter around 0200 last Sunday.  He was transported to the hospital where he later died an hour later from his injuries.  A second firefighter escaped from the rubble and reportedly had minor injuries.

A tip was called into the Arson hotline after the pair were interviewed.

Lt. Little’s memorial service will be held on Friday.

Waycross, GA – City of Waycross Firefighters are grieving the loss of one of their own today.  Lt. David Little, 50, died in the line of duty while battling a house fire.

Firefighters were dispatched to a house fire at 1220 hours located in the 1000 block of Isabella Street in Waycross.  The home had been vacant for several years and had no active utilities at the time of the fire.

It has been ruled arson.

No person is in custody at this time.  However, when they do make an arrest, the person will be charged with murder.  According to a law states, “Any time a Firefighter is killed in the Line of Duty during an arson, the suspect shall be charged with Murder.”

Firefighter Little began his Public Safety career in 1981, working for an ambulance company.  In 1984, he began his professional firefighting career as a Fire-Medic for Childersburg Fire & Rescue in Alabama.  Being promoted through the ranks, he ended with Captain before moving to Waycross, GA.

In July 2013, Little was promoted to Lieutenant.

The Waycross Police and Fire Departments, as well as the Georgia State Fire Marshal’s office are continuing to locate the suspect whom set the fire.  There is a $10,000 reward for any tips leading to an arrest.

[Editor’s Note:  We are so sorry for the Brothers & Sisters of Waycross Fire Department for the loss of one of your own today.  We offer our sincere sympathies and support to LT. Little’s family, fire family, friends and to the Community who lost one of their own.  WE WILL NEVER FORGET.]